It's liberal Americans' Olympic dilemma: How do they root for their countrymen without being jingoistic? 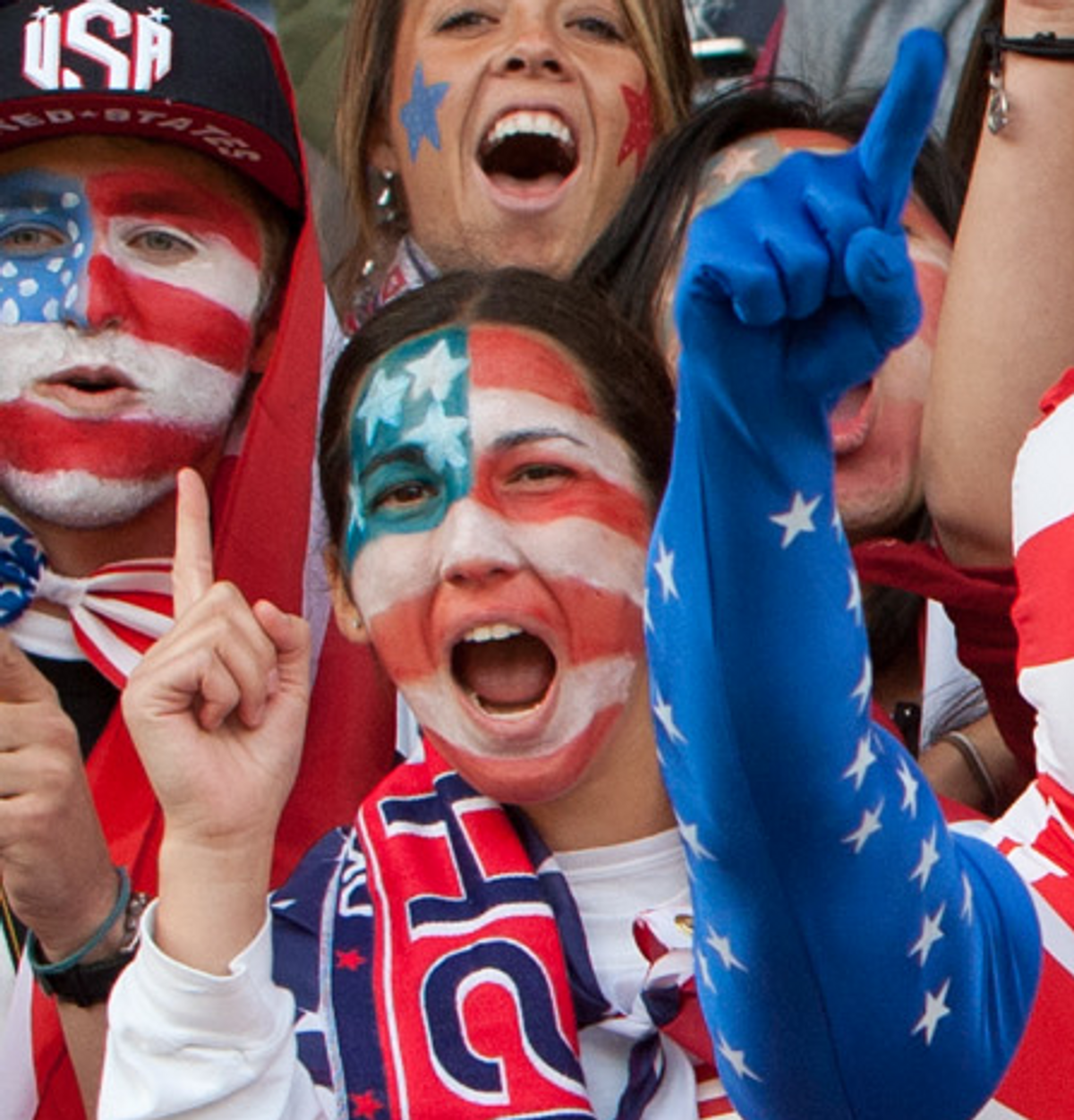 Like so many Americans, I've been periodically tuning in to the Olympic Games. I'm not a serious sports enthusiast, but I pay casual attention -- and when I do, I, like you, instantly scan the screen for the American flag icon among the competitors so that I know which athlete to cheer on. This, no doubt, is one of the appealing qualities of the Olympics. In a world of "asymmetrical" threats and shifting geopolitics, Olympic fandom is a haven for the simpleton in all of us. That Old Glory icon next to an athlete's name distills the games into the good-versus-bad terms that are so elusive in the real world.

And yet, as I've grown older, I find my "U.S.A.!"-chanting reflex increasingly interrupted by pangs of discomfort, and not because I'm ashamed of our country or our Olympians, but because the relationship between American nationalism and the Olympics has been slowly infused with a different -- and politicized -- meaning. In short, chanting the initials of our nation seems less like it did in 1984 than it has since 1992.

Those two Summer Games were the formative events of my -- and so many others' -- Olympic fan psyche.

The former, held in Los Angeles, was a Cold War spectacle of hyper-patriotism deliberately orchestrated to give the big middle finger to the boycotting Soviets and their allies. As ESPN's Michael Weinreb recounted, "Spectators quite literally wrapped themselves in the flag" and "chants of 'U.S.A.!' became so jarring for the foreigners present that IOC president Juan Antonio Samaranch wrote a letter complaining about ABC's unabashedly patriotic coverage of the games."

"Oh, what we've done to the Olympics," wrote Sports Illustrated's Frank Deford at the time. "God only knows what the 2.5 billion people around the globe who are watching the games will think of a vain America, so bountiful and strong, with every advantage, including the home court, reveling in the role of Goliath, gracelessly trumpeting its own good fortune while rudely dismissing its guests."

Such (legitimate and prescient) concerns aside, Weinreb notes, "This was precisely the purpose of the '84 Olympics -- it was a one-sided showcase of American superiority." And as a child, I proudly joined in with the flag waving and fist pumping. In the heat of the Cold War, blatantly mixing sports enthusiasm with not-so-subtle saber rattling felt entirely legitimate and righteous -- especially to my 9-year-old mind.

Then came the 1992 games -- the first after the fall of the Berlin Wall. America was at its geopolitical and economic zenith, able to claim the title of "world's sole superpower." But instead of projecting a ray of humility in the "with-great-power-comes-great-responsibility" spirit, we instead used the Olympics to spike the ball in the end zone -- or, more accurately, 360 windmill dunk over the rest of the planet. That was the year we used a change in Olympic rules to deploy what Sports Illustrated called "arguably the most dominant squad ever assembled in any sport" -- the 1992 Dream Team.

While the NBA fan in me was certainly excited to see some of the greatest pro basketball players of all time play on one squad, I also felt that first twinge of doubt when the competition turned into an international version of the Globetrotters playing the Washington Generals. Why, I wondered, do we have to rub our strength in? Why, when we are so dominant, do we have to preen on the world stage in such cartoonish fashion?

Since those games two decades ago, those questions have transcended sport and become bigger than ever.

Whereas 1984 turned Julius Caesar's "Veni, vidi, vici" into an Olympic posture and a comedic Ghostbusters riff, post-1992 has seen that posture and that comedic riff become both a grand self-image and a dead-serious foreign policy doctrine. From presidential taunts of "bring it on," to televised "shock and awe" campaigns, to flag-draped statue spectacles, to "Top Gun"-style aircraft carrier celebrations, to the rip-roaring parties and pompous political declarations that accompany our escalation of foreign wars, we present ourselves as Caesars -- but with none of Peter Venkman's self-effacing cheekiness and all of the Dream Team's arrogance.

Predictably, such an attitude has infected our political vernacular to the point where the parameters of the discourse are now narrowly defined by a reductionist argument over "American exceptionalism" -- that is, a Colbert-ian throwdown over whether America is great, or the greatest. This has, not surprisingly, led us to assume not merely that American hegemony is permanent and meritorious, but to further assume that specifically flamboyant, in-your-face, happily-pressing-my-boot-to-your-neck dominance is warranted. Indeed, as Frank Rich notes in his must-read New York magazine piece: "We’re not Greece. We’re not even post-empire England. But if we were to slip into so much as a tie for No. 1, that would drive many Americans nuts, because if anything is baked into the national character, it is that we must be the alpha dog, the leader of the pack, the undisputed world champion."

The hyper-patriotism surrounding the modern Olympics, then, is just a reflection of that national character. When that TV screen flashes the list of athletes and we inevitably profile the competitors by nation, we do so not just because we experience natural feelings of solidarity with fellow countrymen. We likely do so also because of that deeper desire to publicly showcase American preeminence -- a desire we've been programmed to haughtily express since the end of the Cold War, a desire we're led to believe we must express in this "love it or leave it" era for fear of being labeled traitors.

Missed in the ensuing red-white-and-blue hoopla, of course, is the fact that we are not so exceptional outside the Olympic village. While Wall Street 24/7 is accurate in reporting that medal-wise, "the United States is irrefutably the most dominant participating country in Olympic history," our athletic victories seem to have an inverse relationship with our standing in other measurements of national success.

For instance, we are not gold, silver or even bronze medalists when it comes to healthcare; sadly, we are 39th for infant mortality, 43rd for female mortality, 42nd for adult male mortality and 36th for life expectancy. Likewise, we are not champions when it comes to basic equality; we are one of the most economically unequal nations in the industrialized world. In fact, if we do stand atop a dais anywhere other than at a sporting event, it is for military spending, carbon emissions and incarceration rates.

In this sense, the shrieks of "USA!" for our athletes take on a "doth protest too much" quality. Our shiny medallions and our patriotic braying reassure us that, despite our slipping world standing, we at least still kick international ass in the competition that gets the highest Nielsen ratings. Meanwhile, the downward standard of living trends persist at home and anti-Americanism festers abroad among a community of nations that often perceives us to be more trash-talking aggressor than humble friend. As if deliberately perpetuating the cycle, our Olympic victories -- and celebrations of those wins -- then (wrongly) convince us of our ongoing superiority, while robbing those weaker nations of any wins that might give them a fleeting feeling of self-empowerment or sovereignty against us. In other words, we are further distracted, and they further emasculated by us militarily, economically, geopolitically and, every four years, athletically. And so the cycle continues...

Noting all of this isn't to pretend I'll be rooting for some other nation. A boy can mature beyond his infantile displays of hyper-patriotism, but the sense of American solidarity will always remain. That means in every individual contest I watch, I'll almost certainly be pulling for the red-white-and-blue (and probably with the occasional "USA!" outburst).

However, I've outgrown the lust for an overpowering victory that has us, medal-count-wise, leave everyone else in the dust. I've outgrown it because while I know our athletes deserve our support and respect, I also know that the same respect is due all the competitors from all the nations at the games -- and respect is something wholly different from complete conquest.

It's a truism we should remember when watching the Olympics -- and when contemplating the larger world.