Romney clarifies: By "culture" he meant "everything else"

When Romney said Palestinians had the wrong culture, he just meant they don't love freedom enough 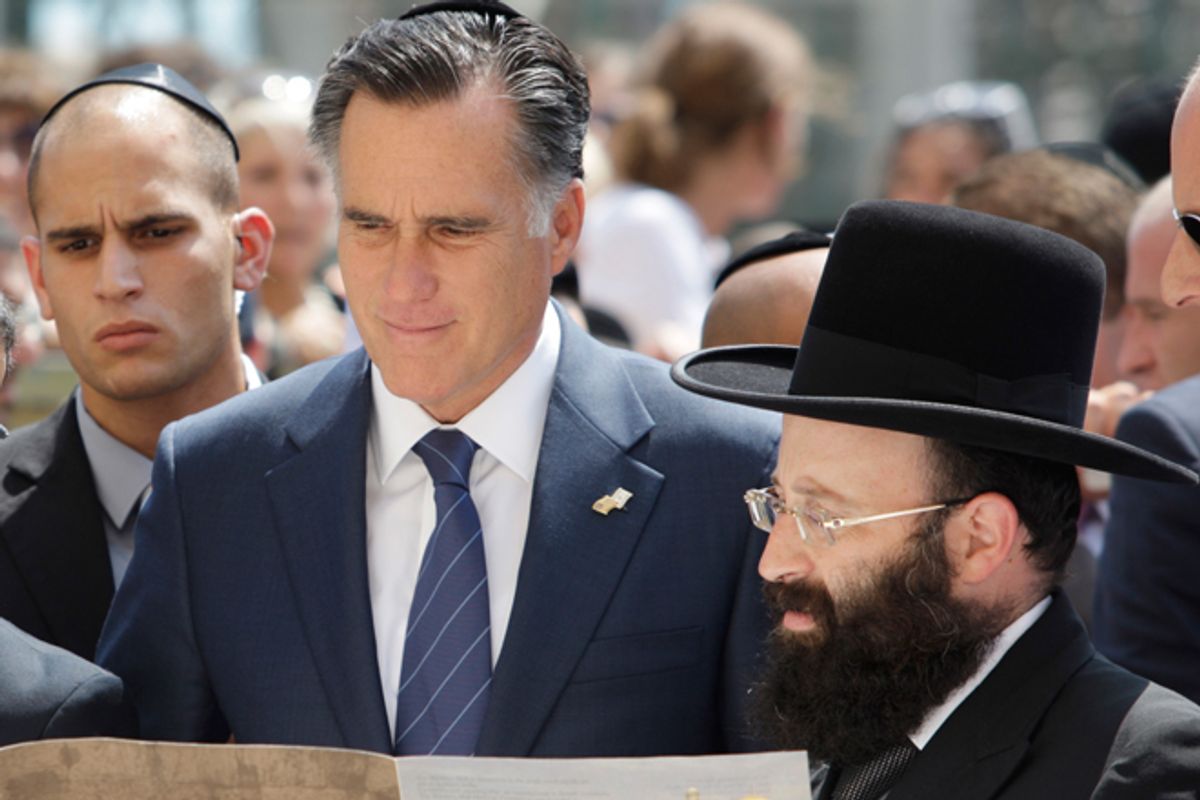 While visiting Israel a few days ago, Mitt Romney offended Palestinians and other humans by saying that Israelis are rich and Palestinians are poor because of the differences between their "cultures," which seemed to imply that he believes that Palestinians are just sort of naturally inclined to live under military occupation. (This didn't seem to bug that many Israelis, even though it does suggest that he believes they are ... innately good with money, let's say.) This was Romney's interpretation of an argument put forth by a historian named David Landes, who wrote a book called "The Wealth and Poverty of Nations." In Mitt's reading, this book explained the very large difference in GDP per capita between Israel and the lands managed by the Palestinian Authority: "Culture makes all the difference," Romney said twice, for emphasis.

Romney basically got the book completely wrong. (As Jonathan Chait says, completely missing the point of good books is a habit of Romney's. I think that's just the way the corporate executive class reads nonfiction, actually.) For Romney, it simply reinforced his natural belief that material success is a reflection of moral superiority. Countries are rich because they have more virtuous cultures! (Romney made essentially the same point, with the same misreading, in his book about not ever apologizing for anything.) Landes, more sensibly, argues that institutions, including governments, shape culture, along with the sort of material, geographical and resource-based factors that Jared Diamond explores in "Guns, Germs and Steel."

Romney is now defending himself with a blog post at The Corner (yep), in which he basically makes an entirely different argument while pretending to defend his original statement. Now it turns out that by "culture" he meant "freedom." He has gone from a cultural determinist to someone who acknowledges that political and material factors shape culture, in other words, though he doesn't really acknowledge the difference.

The Founding Fathers wrote that we are endowed by our Creator with the freedom to pursue happiness. In the America they designed, we would have economic freedom, just as we would have political and religious freedom. Here, we would not be limited by the circumstance of birth nor directed by the supposedly informed hand of government. We would be free to pursue happiness as we wish. Economic freedom is the only force that has consistently succeeded in lifting people out of poverty. It is the only principle that has ever created sustained prosperity. It is why our economy rose to rival those of the world’s leading powers — and has long since surpassed them all.

The linkage between freedom and economic development has a universal applicability. One only has to look at the contrast between East and West Germany, and between North and South Korea for the starkest demonstrations of the meaning of freedom and the absence of freedom.

This is the opposite of the case he made before, that Israel thrives while Palestine suffers because Israel has a more virtuous "culture." Now it's politics, governance and rule of law that make the difference, because the only "cultural" differences between the Germanys and the Koreas were and are those determined by force and by political systems.

Even this new version of his culture argument, in which the embrace of "individual freedoms and the rule of law" creates the culture that enables economic success, is wildly insulting to Palestinians (not remotely surprising for an American politician), as it still suggests that Palestinians just don't value freedom enough to get it for themselves. I've no doubt Marty Peretz believes exactly that but it's not quite the truth of the situation. Romney's big finish:

I have just returned from a trip abroad. I visited three lands — Israel, Poland, and Great Britain — which are defined by their respective struggles for freedom. I met with some of the greatest heroes of those struggles. I am always glad to return to American soil. On this occasion, I am only strengthened in my conviction that the pursuit of happiness is not an American right alone. Israelis, Palestinians, Poles, Russians, Iranians, Americans, all human beings deserve to enjoy the blessings of a culture of freedom and opportunity.

Yes, Palestinians certainly do deserve to enjoy such a culture, and if Romney follows that bold claim to its logical conclusion he'll end up with a pretty radical foreign policy for a Republican. (And what is Britain even doing on this list? No offense to the former British Empire but in many places across the globe -- including Israel! -- the people define themselves in part by remembering their struggle to be free from Great Britain.)