We fell in love at Borders

A year after the chain closed, a writer who met his wife working there hopes bookstores still exist for his new son 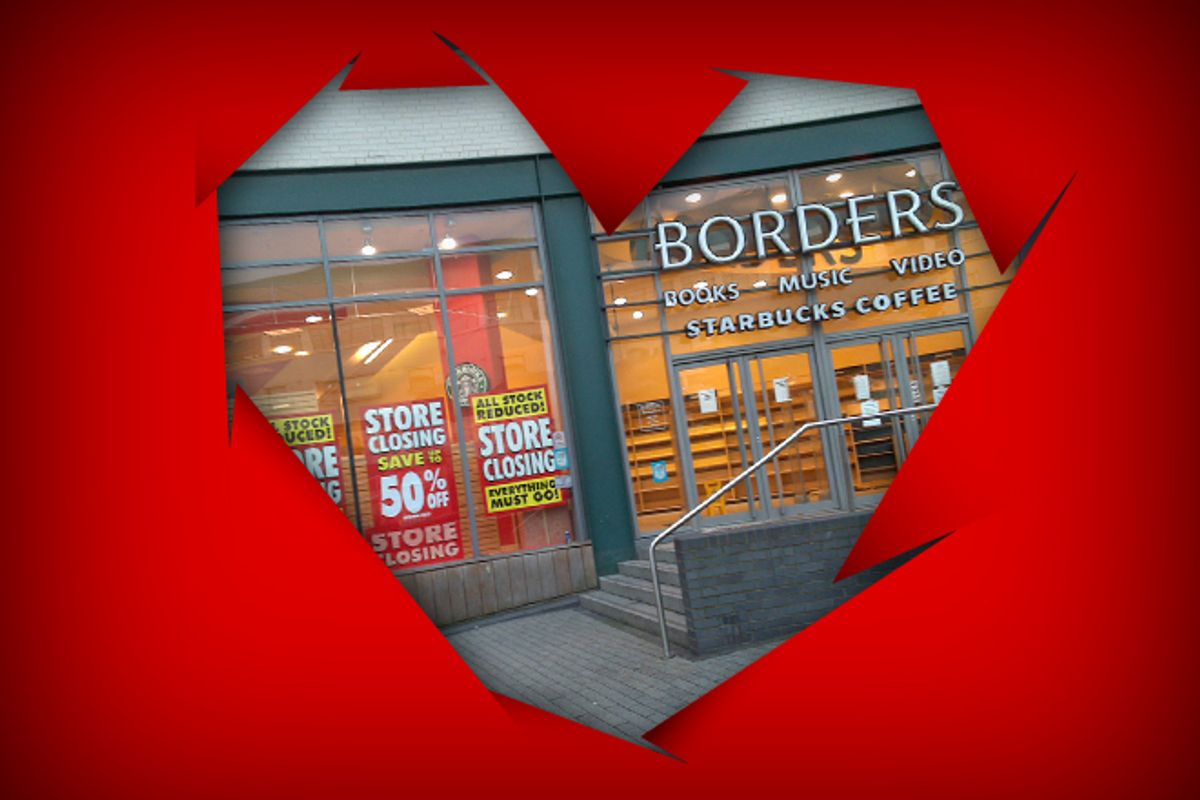 The training supervisor at Borders – a feminist poet with red hair who spoke in slacker tone – gave a tour of the store, pointing out what books were shelved where. I knew the store well. Since finishing college and moving back in with my parents, I visited daily. I wrote poems and short stories in the cafe, and envisioned where my own novel, if I ever wrote one, would one day be shelved.

“This,” said the training supervisor turning a corner in the store, “is where the computer books are.” She pointed at a girl who wore all black and stood on a wooden ladder, a large paperback in one hand. “And this is Melanie, who also just started.”

Melanie and I completed our entire week-long training session together. We were trained on everything from learning the register, to efficiently sorting books when they came off the truck, to properly inputting special orders on an outdated computer with an outdated program. The special orders day I remember fondly. I was sick and sneezed often into my shirtsleeve. Somehow, at the time, I thought she didn’t notice and I was playing it cool. In retrospect, I was a mess.

It took several weeks until our first date – a couples affair at Red Lobster that concluded by being invited back by the other couple for a dip in their hot tub. I didn’t have a bathing suit, and the other guy, a cyclist named Willem, offered his size 26-waist swimsuit. They barely fit, and, gut sucked in, I leaped into the water. Melanie held my hand over a jet of warm bubbles.

It sounds ridiculous to say we fell in love at Borders, but we did. I left notes in Melanie’s locker that listed a title and page number and she’d find the book (I used Anne Sexton’s "Love Poems" often) and open to the poem I had previously found for her. We bought each other books with our store discount. We drank cups of free coffee and stocked books side by side.

There were signs then, that I didn’t pick up on, that the company had problems. During my lunch break, I’d skim the corporate newsletter and read about a new CEO, a new vice president and a new sales director. Borders constantly, and erratically, introduced new store policies, new marketing layouts, and specifically the disastrous Borders Rewards Card.

As my relationship with Melanie grew, the changes at Borders continued; each was for the worst. One change that I will detail in a moment prompted Melanie to quit. To this day I don’t blame her. When it happened, I was impressed that someone could, and did, stick to their beliefs and limits about what an employee would put up with.

As sales decreased annually beginning in 2006, with the company losing as much as a billion dollars over the next four years, executives sought more changes. Soon, we were told to wear only khakis, tattoos would need to be covered, no piercings could be visible, and shirts had to be tucked in and contain no offensive language. The DVD section expanded, the literature section shrank.

Shortly after the release of the Borders Rewards Card, we were all given headsets, which would enable us to “communicate more efficiently.” The changes came in an ugly wave: the clothing, the loyalty card, the headsets. If you took away the books, we appeared to be working at the Gap. What made Borders interesting, what Melanie and I loved about it and what drew us toward it, was quickly erased.

Think about this: One of the assistant managers once told me that when he began at Borders, nearly 20 years before I was hired, the store gave a Book Test to potential employees. You were asked what books you were currently reading, what your favorite book was and why, and even given a multiple-choice test on where books would be shelved. You had to be someone who loved books in order to get hired.

The headset is why Melanie quit. She said what we all thought: It was degrading and ridiculous. Our store was tiny. The store's opposite corners could be walked to and fro in less than 30 seconds. I’m still proud of Melanie for quitting – something I couldn’t do. I shamefully wore the headset into which I spoke, “Please bring out more Harry Potter,” each day.

Late last July, the first Borders stores began shutting their doors. Melanie and I went to two stores within driving distance for clearance sales, but we couldn’t go to the store where we met. I still regret not buying one of the cafe's leather chairs.

We’re expecting our first child in September. The reality – both exciting and terrifying – of bringing a child into this world brings up many obvious and important concerns, but one I’ve thought several times (other than how to diaper quickly and effectively) is this: Will bookstores exist when my son is old enough to read this essay? Ten years ago this question would be deemed dramatic and even absurd, but now the possibility seems like a bleak reality. I want my son to feel the magic I felt in bookstores. I want him to fall in love with authors like I did and get that night-before Tuesday excitement of a new book by your favorite author being published. All of us can agree that clicking pre-order on a Web page is inexpensive and convenient, but it lacks true excitement.

One of my favorite bookstores is St. Marks in New York's East Village. It’s a bookstore that feels alive with the intimate, electric connection between customer, book and bookseller. (Of course, it too is looking for a new, smaller home.) I miss this everyday feeling that I had while working at Borders. I want to share this feeling.

Seeing Borders fail was odd for me because on one hand it was a large and ugly corporation, and on the other hand, a place where I loved books and met Melanie. We have a son on the way. Let us all meet in bookstores.