Rapper Kreayshawn talks to Salon about homophobia, Frank Ocean and her no-labels approach to sexuality 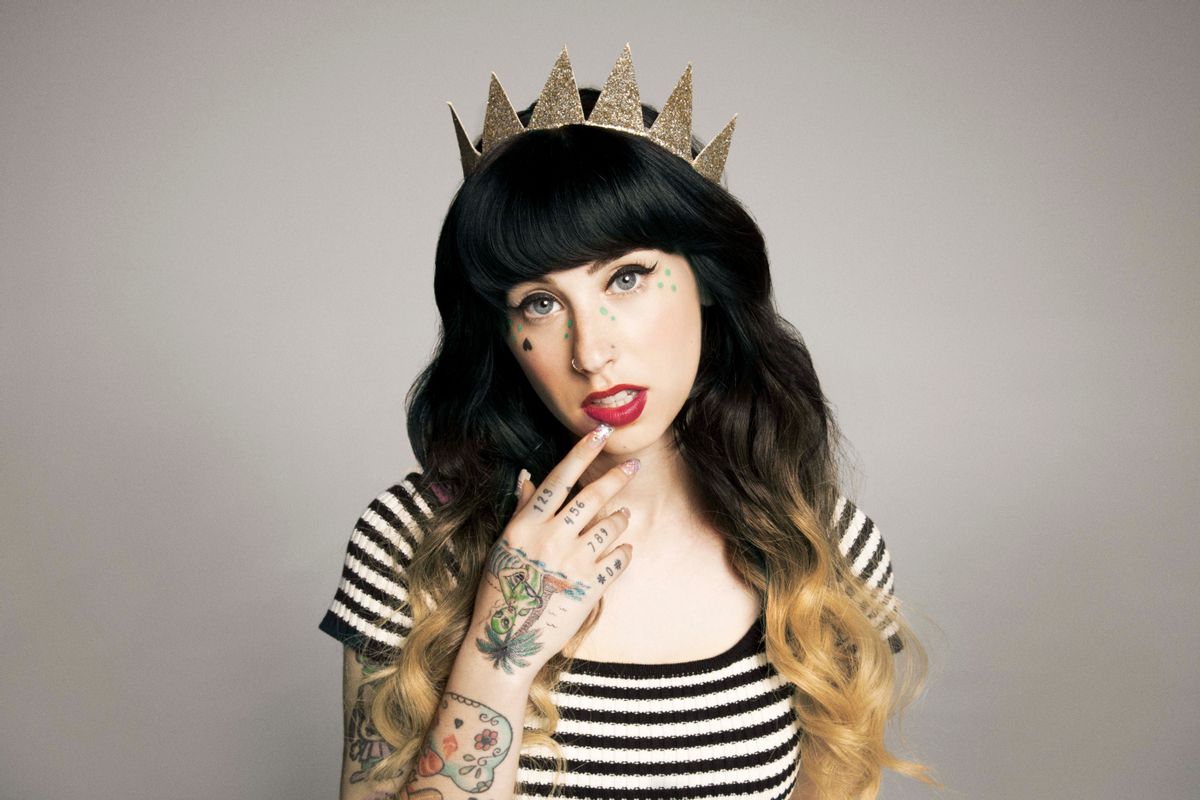 Rapper Kreayshawn has been called a "post-gay" poster child. That's thanks to her openness about dating both men and women, and making out with a girl in a music video, as well as her refusal to adopt labels like straight, gay or bisexual. She's also spoken out against homophobia -- comparing it to racism -- and refuses to put up with the slur "faggot," a go-to insult in the world of rap.

But the 22-year-old Oakland, Calif., native, who rose to Internet fame with the infectious hit "Gucci, Gucci" before signing a reported 1-million-dollar record deal, has felt it necessary to clarify that she's "not a raging lesbian." "Kreay," as she's called for short, also admits to resorting to the insult "that's so gay" from time to time. Perhaps she's more accurately a post-Frank Ocean poster child, a symbol of just how far rap, and our culture at large, has come -- and how imperfect that progress has been.

I spoke to Kreayshawn by phone about sexuality, homophobia and up-and-coming gay rappers.

Hip-hop singer Frank Ocean came out last month and got all sorts of praise from folks like Jay-Z and even Tyler the Creator, who is known for especially homophobic lyrics. Is hip-hop as a whole becoming more accepting?

Definitely the Internet and the fact that everyone in the world has access to everything has opened up the doors for hip-hop in general, as far as being a female or being homosexual, you know? I definitely think that as time goes on, the lines will be more blurred on stuff like that. But there’s definitely still people who don’t understand stuff like that.

Will it have any impact on homophobic lyrics? Do you see those going away any time soon?

I think it’s hard because people will say “you’re gay” to make you angry. It’s kinda like how people in the [Bay Area] always say, “Oh, that’s hella gay” or “Naw, I don’t do that shit, that’s hella gay.” It doesn’t mean “homosexual” but it’s supposed to mean “bad” or “not cool.” [That’s] been so embedded, so I don’t know that it’s going to change the way that people talk to each other, the fact that Frank Ocean came out, but I think that for our younger generation, and the generations below us, it’s definitely going to effect how they talk. I see a lot of people on Twitter, and a lot of people that are younger, like 13 and 12, say that they’re openly gay. People my age, when they were 13 and 12, they wouldn’t ever [do that], I would never see an openly gay person.

That’s why it’s really great for somebody like Frank Ocean to come out and say what he really feels, you know what I’m saying? Because a lot of people prolly in our age group feel that way but never knew how to say it. I think it was really cool because a lot of younger people are gonna look up to him and say, “If he can do it and he’s that big then I can do it in my home town” or “I can do it in my house.”

Do you think that as being gay becomes more acceptable and less taboo that saying “that’s so gay” just won’t be such an effective insult in rap?

There’s times when I’ll be with my gay friends and I’ll be hella mad and be like “Oh my god, that’s hella fucking gay.” Sometimes, depending on if I don’t know the person or if I’m in a group of people, I’m like, “Oh, my bad.” I don’t want to offend anyone. There’s been times where I go to other cities and I’ll be hanging out with fans who’re gay and we’re hanging out in a parking lot smoking weed, or we’re in Vegas at the tables hanging out, and somebody will say a slick ass comment like, “What? I’m not no faggot.” And I’ll turn around and I’ll have to say something like, “You don’t say that word. You might as well be saying some racist-ass shit right now.” It changes with time, with [different] generations.

Is it kind of similar to using words about women, like “bitches” or “hoes” -- they’re the best insults we have?

I guess. I made this comparison on Twitter around the same time when Frank Ocean came out, and everyone was tweeting about it and everyone was saying homophobe things on my timeline, and I said something to the effect that being a homophobe is the same thing as being racist because people are born gay just like people are born whatever color they are. To say “faggot” is like saying the same thing as the n-word. It holds the same power because it was used the same way.

But then you have a group of young gay people and they’ll be like, “Aw, that’s hella gay,” but they’re with each other, so it makes it okay. It’s just hard because everything has a double standard, everything is a “yes” and a “no” at the same time.

You've said before that you've dated both men and women but that you don't like labels. How come?

So you’re kind of blind to gender.

As a female rapper, do you think it’s easier to come out as bisexual – or express interest in both sexes --than as lesbian just in terms of marketability?

I mean, like, honestly? I don’t think it matters, because there are a bunch of people who are gay and straight and their music sounds the same. Music is music; it comes from the heart.

A few years back, female rapper Lady Sovereign, who has since come out, was pressured by handlers to stay in the closet. What did you think of that? Have you felt any pressure to play it straighter?

The Internet plays a huge role in music now, just because the whole world is involved in the song. The more people you have listening to it, the less pressure there is to create this perfect person or idol celebrity. I’m not pressured by my label at all. In those [few] years, a lot has changed and it’s more [acceptable]. But, I mean, it’s still fucked up because gay people still can’t get married.

Right. It’s hardly just a problem in hip-hop; it’s our whole society. Can you imagine a gay male rapper making it big?

I could see it definitely within the next year. It could either be someone who’s already big coming out or somebody who was already out and just climbs to the top. Honestly, I don’t know if I could see the industry signing somebody who’s already openly gay because they’d be like, “I don’t know how to market that.” I have friends who are gay and trying to get into the industry and feel like [they can’t].

I think there’s just gotta be more people in the industry who want to say what Frank Ocean said. He can’t be the only one. Hopefully just more people come out and it becomes more obvious that, look, this is just how it is.

That’s it unless there’s anything else you want to add.