The media coverage has been brutal of late, and Mitt hopes an early pick will change the subject 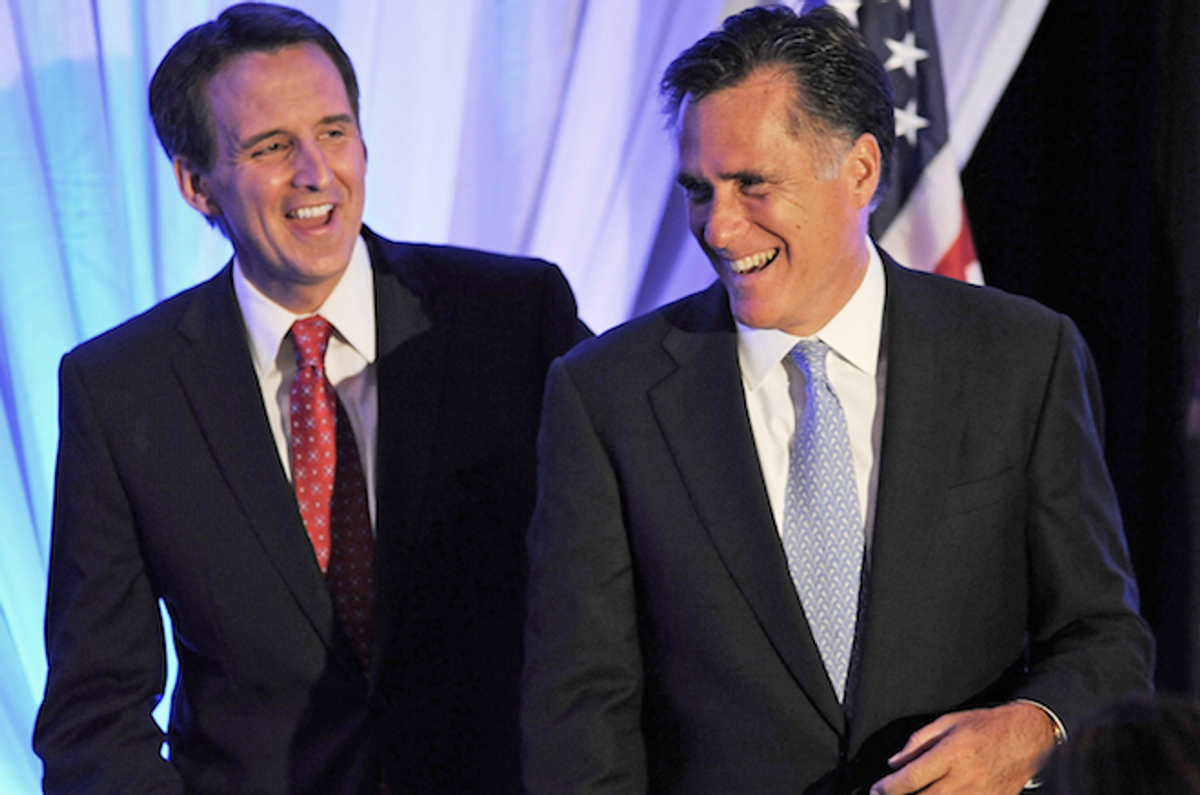 In terms of media coverage, it’s been a rough summer for the Romney campaign. Controversy over his tenure at Bain Capital, his refusal to release more tax records, an amateurish overseas trip and a now problematic independent report that challenges the credibility of his tax reform promises have given his opponents ample ammunition and left the presumptive GOP nominee on the defensive.

Officially, his campaign insists that this all amounts to meaningless media noise, and that the only thing that will really matter to swing voters when they head to the polls is the lousy state of the economy. There’s plenty to this; to judge from the tone of the coverage only, you might think Romney has spent the summer in a polling free fall. But the national horse race really hasn’t changed in the past few months; Obama leads by an average of about 2 points. And while polling from three swing states released yesterday showed Obama opening significant leads, it’s far from clear whether this represents the start of a trend or a statistical blip that will soon be forgotten.

That said, the status of Romney’s running-mate search may offer a clue into what his campaign really thinks about how things are going.

The news today is that Beth Myers, who’s leading Romney’s V.P. search from Boston, has joined up with him in Colorado, where he’s embarking on his first campaign/fundraising swing since returning from abroad. The speculation is that Romney will unveil his selection next Friday, when a four-day swing state bus tour is scheduled to begin. If this is Romney’s plan, it would be one of the earliest V.P. announcements of the modern era, coming more than two weeks before the start of the party’s Tampa convention.

Standard practice has been for presidential nominees to name their picks just before the start of the convention – or even during it. Here’s how it’s gone down in the past:

2008, Democrats: Word broke in the wee hours of Saturday, Aug. 23, that Barack Obama had settled on Joe Biden as his running mate. The decision was formally announced at a rally in Springfield that afternoon, with the Denver convention starting 48 hours later.

2008, Republicans: John McCain’s surprise selection of Sarah Palin was announced at an Ohio rally on the morning after Obama’s Democratic acceptance speech, three days before the GOP convened in St. Paul.

2004, Democrats: This now stands as the earliest pick, with John Kerry making his selection of John Edwards official on July 6 – nearly three full weeks before the start of the Boston convention.

2000, Republicans: George W. Bush and Dick Cheney made their debut together on Tuesday, July 25. The GOP’s Philadelphia convention began on Monday, July 31.

2000, Democrats: In an effort to upstage the GOP proceedings, Al Gore sent word on July 31 that he’d announce his pick on Aug. 8, six days before the start of the Democratic convention. There was some urgency for Gore to seek headlines with the V.P. drama; he’d spent the spring and summer months running behind Bush in the polls, and the GOP convention promised to give Bush a bounce that would increase his lead.

1996, Republicans: Bob Dole’s pick of Jack Kemp, his one-time intraparty antagonist, was a surprise when it was announced on the Saturday before the party’s San Diego convention.

1992, Democrats: Bill Clinton and Al Gore appeared together in Little Rock on Thursday July 9. The Democrats’ convention began the next Monday in New York.

1988, Democrats: Michael Dukakis brought Lloyd Bentsen to Boston on Tuesday, July 12, six days before the Democratic convention. This was a particularly sensitive selection, since Dukakis was under heavy public pressure from Jesse Jackson, who’d won 7 million votes during the primaries, to choose him as his running mate. Dukakis didn’t want the matter unresolved heading into the convention.

1988, Republicans: It wasn’t until the second day of the New Orleans convention that George H.W. Bush tapped Dan Quayle to be his No. 2. Part of the reason for the delay had to do with Ronald Reagan; the first day of the convention was essentially a tribute to the outgoing president, with Bush only showing up after Reagan spoke and was heading out of town.

1984, Democrats: A midday press conference in St. Paul is where Walter Mondale named Geraldine Ferraro as his running mate on Thursday, July 12. The convention started the next Monday.

1980, Republicans: Ronald Reagan waited until the final morning of the Detroit convention to make a surprise appearance at the podium, where he informed delegates that former President Gerald Ford – who had been in negotiations with the Reagan team about the No. 2 slot all week – had backed out and that his choice would be Bush.

1976, Republicans: This was the last time there was genuine suspense at either party’s convention over whom the presidential nominee would be. It wasn’t until he had finally fended off (and consulted with) Reagan that Ford chose Bob Dole to be his No. 2.

If Romney breaks with this tradition, it will suggest two things: 1) that his campaign does view the negative coverage of the summer months as a problem, and is looking for a way to change the subject; and 2) they’re not interested in changing the subject by releasing more tax records or more details about Romney’s tax plans or his Bain tenure. In other words, the V.P. rollout may be the only card they have to play.