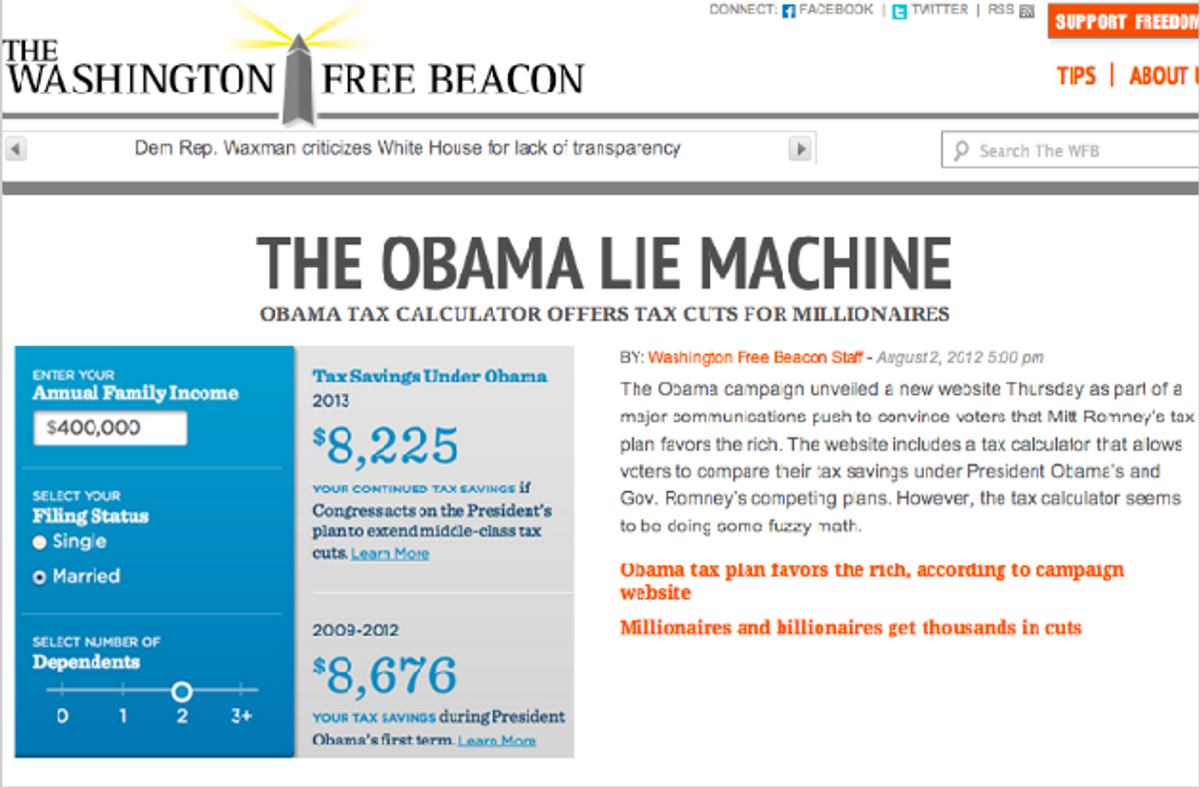 The Washington Free Beacon, a conservative investigative website modeled after the liberal ThinkProgress, thought it had a hot scoop this evening: The Obama campaign is lying to the American people via a tool on its website that lets people calculate their taxes under President Obama’s plan for extending the Bush tax cuts. The story led the site for at least an hour after it was published at 5 p.m. today with the provocative headline, “THE OBAMA LIE MACHINE.”

In a tweet linking to the story, the Beacon writes, “Shocker: Obama tax calculator, not exactly good with the math thing.” The story also accuses the Obama campaign’s online tax calculator of “doing some fuzzy math.” The Beacon (and mercifully for whoever wrote the item, there is no byline) comes to this conclusion because the calculator shows people making millions of dollars getting a tax break. “President Obama has promised to raise income taxes on all Americans making more than $200,000 and all families making more than $250,000 a year,” they write.

But really it’s the Beacon that has its math wrong. Stunningly wrong. The entire gleefully snarky post is premised on a fundamental misunderstanding of the way taxes work. Obama wants to end the Bush tax cuts on income over $200,000 a year, not people who make $200,000 a year. So everyone, including Bill Gates and Mitt Romney, will still get the tax breaks on the first $200,000 of their income (or $250,000 for a married couple). The debate is over what happens after that, to the 200,001st dollar of income and above. Mitt Romney and Republicans want to preserve the Bush tax cuts for every dollar above $200,000, Obama wants to end them.

So of course Obama’s tax calculator shows a tax benefit for millionaires and billionaires, whom the Beacon thinks will be “surprised to find that they, too, will receive ‘tax savings.'” It’s called marginal tax rates and, ironically, conservatives often accuse liberals of not understanding them.

But we shouldn’t be too harsh on the Beacon as a lot of people have gotten this wrong. As New York magazine’s Dan Amira noted earlier this month, virtually every single media outlet was misreporting the facts on the Bush tax cuts, making a similar mistake to the Beacon’s. Really, the Beacon post just shows everything wrong with the media coverage of the Bush tax cut debate, though it may take the fail to another level. An email sent to the Beacon was not immediately returned.