How far have we gone in fixing the mortgage crisis? We have no idea, because no one's counting foreclosures 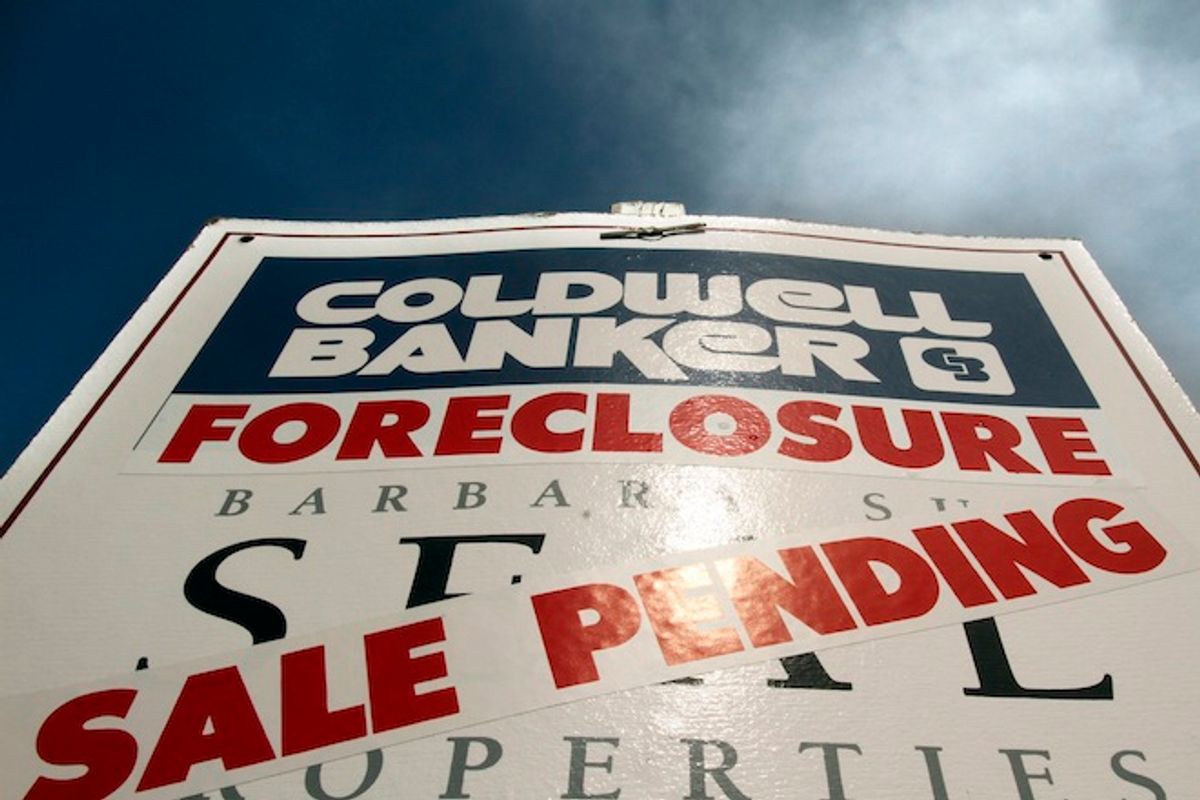 If you were to read the headlines on the ongoing foreclosure crisis, you'd get very confused. Are "Foreclosure Filings Increasing in 60% of Large U.S. Cities," as Bloomberg reports? Are "Foreclosure Machines Still Running on 'Low,'" as the Wall Street Journal says? Or are we in the midst of a "Foreclosure Surge," as CBS News would have us believe? The answer, unfortunately, is that we don't really know.

Six years after the foreclosure crisis began in earnest, as former Congressional Oversight Panel vice chair and current AFL-CIO general counsel Damon Silvers put it, "it's impossible to get reliable, comprehensive information on foreclosures." The government is still not effectively measuring the single biggest weight on the American economy, the foreclosure epidemic that has claimed millions of homes.

There are four separate widely followed private foreclosure tracking services -- Corelogic, LPS, RealtyTrac, and the Mortgage Banker's Association National Delinquency Survey. Each has problems, and none is comprehensive. There are also government sources for foreclosures. The Office of the Comptroller of the Currency, which regulates national banks, has a widely cited Mortgage Metric Report. The data for that report comes from the big mortgage services, and it is "rigorously reviewed", according to Bryan Hubbard, spokesman for the OCC. It's considered good data, but it covers only 50 to 60 percent of the market, the part controlled by services regulated by the OCC. The FHFA tracks some limited data around Fannie and Freddie loans, and the VA and FHA track some data around loans guaranteed by those agencies. But like the private data services, none of these foreclosure sources are comprehensive.

This causes significant problems for policymakers (and thus homeowners). As Silvers put it, "If you do x, whatever x, refis, principal write-downs, interest subsidy programs, how much is it going to cost?" The lack of data is impacting the key policy question over debt relief for homeowners. Currently, there are proposals outstanding for Fannie and Freddie to write down mortgage principals for homeowners that are underwater, or owe more on their mortgage than their home is worth. Liberal groups are seeking to have the official in charge of these two entities, acting FHFA chief Ed Demarco, fired for his intransigence in this policy area. There are also proposals for municipalities to seize performing underwater mortgages through eminent domain and restructure and resell them. A key question in these disputes is how these proposals would impact foreclosures. And because of the lack of data, we can only guess. "If you write up some sort of protocol for doing something with mortgages, the question can't really be answered vigorously under the current data regime. And the consequence is actually that it produces a reluctance to act. The lack of good data has seriously contributed to the inability to make good policy in this area," says Silvers.

The problem of foreclosure data has been understood for years. In April, 2009, Elizabeth Warren's Congressional Oversight Panel released a report detailing problems in this space and citing a "failure of regulatory intelligence gathering and analysis." Dodd-Frank even included a provision for the Consumer Financial Protection Bureau and the Department of Housing and Urban Development to create a national database of foreclosures. The bill, however, did not provide the necessary funding mechanism for HUD to do so, nor did it include a deadline. The next Congress, not surprisingly, has also failed to appropriate the funds. According to Brian Sullivan at HUD, the agency also lacks "statutory authority to compel the reporting to HUD of information necessary to compile localized loan performance data."

The Consumer Financial Protection Bureau, which has a strong research component, has partially stepped into the breach. HUD is working with the Consumer Financial Protection Bureau to begin "exploring and evaluating options for creating the database," according to Pete Carroll, CFPB's assistant director of mortgage markets. "In order to best understand what is going on in the mortgage marketplace, regulators need solid loan performance data." But there is no deadline or dedicated congressional funding for the joint HUD-CFPB project, and other priorities that are funded take precedence. There are no congressional hearings scheduled over this crucial element of Dodd-Frank, nor is there congressional pressure to look into whether the regulators can even peer into the housing market with precision. And should Mitt Romney win and alter the direction of the CFPB, or should the CFPB lose a funding battle in Congress, the creation of a database will stop at the exploration stage.

The lack of data speaks to the "absolutely insane way we do housing policy," according to Georgetown law professor Adam Levitin. The problems in this area are exacerbated by a mix of failed leadership and bureaucratic design. "What is our housing policy? We don't have one, because no one's responsible for it. Treasury and the Fed are not housing experts, but they seem to be as involved as anyone. We don't have a housing czar. The system worked fine before 2008, because housing policy was very simple. It was, increase homeownership. Now that we're more sophisticated about housing policy, we have a problem because no one's in charge of it."

"Foreclosure is a government act, this is completely bizarre," says Silvers. "It's not like this is tracking a disease; you can't foreclose unless you get the state involved. If there were a desire to understand the foreclosure situation, it would be relatively easy to get the various parties involved to file a form with the CFPB or the Fed or pick your agency."

As Levitin puts it, "the lack of accountability for housing policy is especially galling in 2012 because for years we've had people saying 'housing is at the center of our economic troubles,' and yet the administration has done nothing to produce a housing policy apparatus. You can see this in where they put HAMP, they put this in Treasury. Prior to 2008, Treasury had zero experience in housing. You see it with the fact that Demarco is the head of FHFA. If I were the President and I knew that housing was our number one economic policy problem, I'd want my guy running that agency."

In the housing and foreclosure space, Levitin notes, there is no leadership: "No one wants the football." That's why the government doesn't have adequate data on the characteristics of the foreclosure epidemic. You can't manage what you can't measure. So if you want to avoid managing a problem, just don't measure it.