What happens when Americans start thinking about economic policy the same way they do gay marriage or abortion? 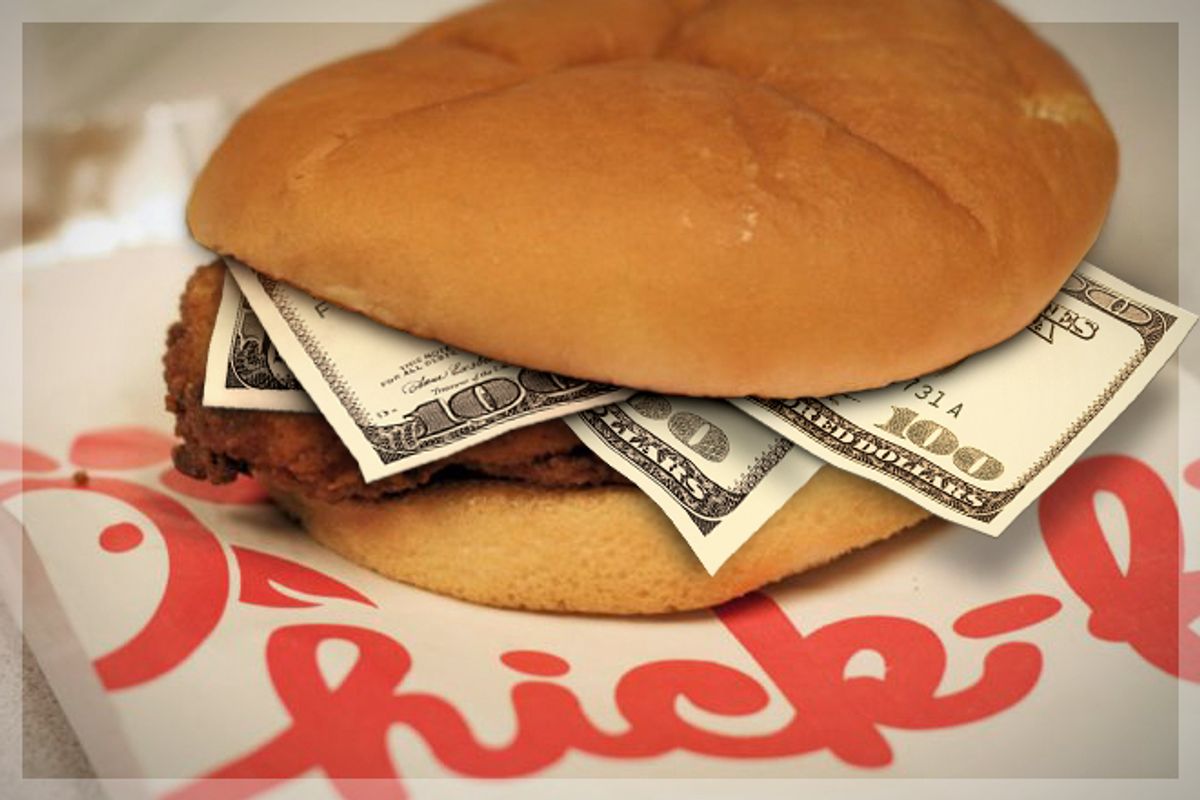 When ranked up against 20 of the richest, most developed countries in the world, the United States fares abysmally. Our life expectancy at birth is lowest and our infant mortality rate is highest -- and yet our per capita healthcare expenditures top the charts. We have the worst income inequality -- the top 1 percent gobble up by far the biggest chunk of overall income -- and we also have one of the worst rankings for inter-generational mobility. Perhaps most disturbing, on most of these metrics, over the past three decades, the U.S. has generally been moving in the wrong direction. So not only are the rich getting richer, but our chances of moving from poor to rich are worsening.

These distressing facts occupy the heart of a major new liberal manifesto for rebuilding the U.S. economy released earlier this week: "Prosperity Economics: Building an Economics for All." They provide the explicit rationale for why things have to change, why the course of economic policy over the last three decades must shift. As the manifesto points out, America's report cards have gotten steadily worse during a period in which, by and large, government economic policy has favored lowering taxes, cutting regulations on business, and undermining the power of organized labor. One of the most compelling parts of the report is its demonstration of how the "austerity" policies currently in vogue are exactly the wrong prescription for a country struggling with slow economic growth and high unemployment. Instead of curing our woes, we're compounding them.

Seems crazy, huh? If you were an evidence-minded person you might be moved to at least consider the recommendations that come at the end of "Prosperity Economics." The facts are in: The middle class has been pummeled. The fruits of economic growth and trade are no longer widely distributed. So let's try something different! Let's embrace the philosophy that says shared prosperity for all offers the best path to vigorous economic growth. Let's pump money directly into infrastructure and higher education, job training and scientific research. Let's give unions a hand instead of the iron boot and tighten regulations on the banks instead of loosen them. Most difficult of all -- in order to pay for all these bold initiatives, let's raise taxes from their historic lows instead of cutting them even further.

Sounds great -- to the kind of person who nods along when reading Paul Krugman Op-Eds. But as I worked my way through the report, I couldn't stop myself from thinking, What's the point? Half the country would rather hug a corpse than embrace the agenda laid out in "Prosperity Economics." To many Americans, the available evidence suggests that economic policies that favor the richest Americans and the most unrestrained free market have never been more discredited than they are now. And yet, half the country supports a candidate for president who is not only one of the richest men to ever run for the White House, but who also supports cutting taxes on the wealthy even further, and deregulating markets even more. A sluggish economy and disappointment in (or hatred of) Barack Obama explains part of this baffling development, but surely not all.

I blame Meat Mondays and Chick-Fil-A. Somewhere during the the past 10 to 15 years economic policy positions in the U.S. have become cultural values: Issues like tax cuts or deficits have become as toxic in the public discourse as abortion or gay marriage. Increasingly, people seem to choose their positions not because of what the "evidence" indicates, but because they are seeking ideological markers that fit snugly into a web of tribal partisan allegiances. To pick just one defining example: It doesn't matter whether one can prove that tax cuts are at a historic low, or have a disastrous effect on the deficit, or even how many economists point out that further cuts won't generate revenue to pay for themselves. Opposition to taxes defines what it means to be a conservative today, just as does opposition to abortion. You can't be a conservative who supports higher taxes -- that would make you a liberal. The hardening into concrete of this faith-based economic policy value system is a relatively recent phenomenon that has incurred disastrous fallout:  The U.S. is now incapable of debate or compromise. We've chosen sides, and all-out war is all we've got left.

For those who haven't been following the ins and outs of the latest government dietary recommendations, the phrase "Meat Mondays" refers to a recent incident in which an inter-office newsletter at the USDA inadvertently sparked a culture war brouhaha with its recommendation that "Meatless Mondays" were "one simple way to reduce your environmental impact while dining at our cafeterias." As the New York Times' Amy Harmon reported, groups pushing healthier vegetarian diets also advocate Meatless Mondays.

The beef industry launched its lobbyists in a massive retaliation strike in less time than it takes to eat a raw string bean, with Republican politicians following close behind. Iowa's Chuck Grassley and Texas' John Cornyn promptly staged a Meat Monday feeding frenzy, with "a lunch of barbecue beef brisket, ribs, and sausage."

"This is a reminder to USDA that it’s supposed to advocate for American agriculture, not against it,” said Grassley.

The USDA promptly pressed the craven button and retracted the newsletter, announcing that it "was posted without proper clearance,” and that the agency did not endorse Meatless Mondays. That in itself is a nice metaphor for Obama administration spinelessness, but it's not the important lesson to be learned from this episode. The real takeaway is what this absurdity tells us about the gulf between vegetarian believers in man-made global warming and Texas beef barons who believe the role of the government is to protect their right to sell as many hamburgers as possible. That's a culture war divide, and no amount of data on whether increased levels of carbon dioxide in the atmosphere are overheating the planet, or whether red meat consumption lowers life expectancy will change that division.

The implications buried in Meat Monday silliness are troubling. Because once you define those who would encourage you to eat less red meat as your unpatriotic enemy, then it's very easy to oppose everything that your enemy also supports right along with it: energy conservation, carbon taxes, state support of green energy or, even more broadly, the very notion that the state should intervene in the economy to help people.  And if science says humans are responsible for climate change, then the science must be a hoax.

The parallels to what's happening in the economic policy domain are increasingly obvious. From Day One of the Obama administration, Republicans warned that big deficits would lead to hyperinflation. It hasn't happened yet, but the rhetoric hasn't budged an iota. The shrinking size of government at all levels has been a major drag on the economy, and still, the call is to cut more spending. The data on rising income inequality are shrugged off -- and greeted with demands for even higher tax cuts for the rich and complaints that the poor and middle class aren't paying enough taxes. In every case, what passes for political debate isn't informed by the available data, but by the starting position of the contestants.

I don't have detailed polling analysis at hand, but my guess is that the vegetarian environmentalists probably also support more government intervention in the economy and higher taxes on the rich, while the throngs who tweet supportingly about Meat Mondays -- or, to bring another recent culture war front into the battle, who line up in front of Chick-fil-A outlets to demonstrate their support of the ownership's position against gay marriage -- are largely in the big-government-is-bad, Obamacare-is-socialism camp. Chick-fil-A, come to think of it, is probably the perfect place to celebrate Meat Monday! Our choice of cultural values is now influencing our choice of economic positions -- and, especially on the conservative side, there's very little room for heterodoxy.

The notion that Republicans and Democrats, or liberals and conservatives, have different value sets is not an earth-shaking observation. But in days of yore, there used to be such a thing as northern Republicans who were relatively liberal, and southern Democrats who were extremely conservative. There was a lot of internal variation within political parties, which created all kinds of possibilities for cross-party compromise and coalition building. In economic terms, there was also a consensus, best captured by Richard Nixon's "We're all Keynesians now" comment, that held that government should attempt to counteract the ups and downs of the spending cycle -- specifically, deficit spending is not a bad thing during a recession; in fact, it's just what the doctor ordered.

But consensus is no longer a workable proposition in contemporary politics. We can blame the Voting Rights Act for turning the South Republican, or we can note Roe v. Wade for energizing an entire generation of hard-right religiously flavored conservative activists, or we can target '60s-era hippie enlightenment for spreading the trippy idea that the earth is a fragile organism threatened by human activities, but one thing's for sure, partisan realignment has made compromise and coalition virtually impossible. And one of the byproducts of this realignment is that positions on economic policy have now become as immovable as one's position on abortion. Economists might look at the data, but most people don't. Politics has become little more than a vehicle for cultural warfare -- something vividly demonstrated by the post 2010 antics of Tea Party Republicans in the House, who used the budget process to go after not just healthcare or overall spending, but Planned Parenthood and the EPA and NPR. There's no sense that Congress' job is to solve problems by coming together in a compromise deal that responds to the necessities of the day -- it's all about scoring points that advance one side or the other's ideological agenda.

"Prosperity Economics" is well-written, cogently argued and, to my mind, exquisitely fact-based. It includes a stirring call to arms along with a forthright acknowledgment that a single manifesto is unlikely to change the world.

No single document can shift public debate, but we hope that the ideas included here will add to a growing movement for change that rejects the false logic and false promises of austerity economics and starts rebuilding the American dream. This movement will have to build power sufficient to push for a new generation of economic policies and for the political reform necessary to achieve them. But it is possible. We have seen powerful, effective movements before in American history—from the New Deal to the civil rights movement—and we will see them again.

But despite all the intellectual firepower behind it, it also feels irrelevant. It doesn't solve the problem of what to do about Meat Mondays. Creating that new movement will require breaking up the solidarity that has welded economic positions and social values together -- and that's a daunting feat when all the momentum appears to be going in the other direction.