After a residency in Iceland's capital, an artist reflects on the graffiti and paintings covering the city's walls 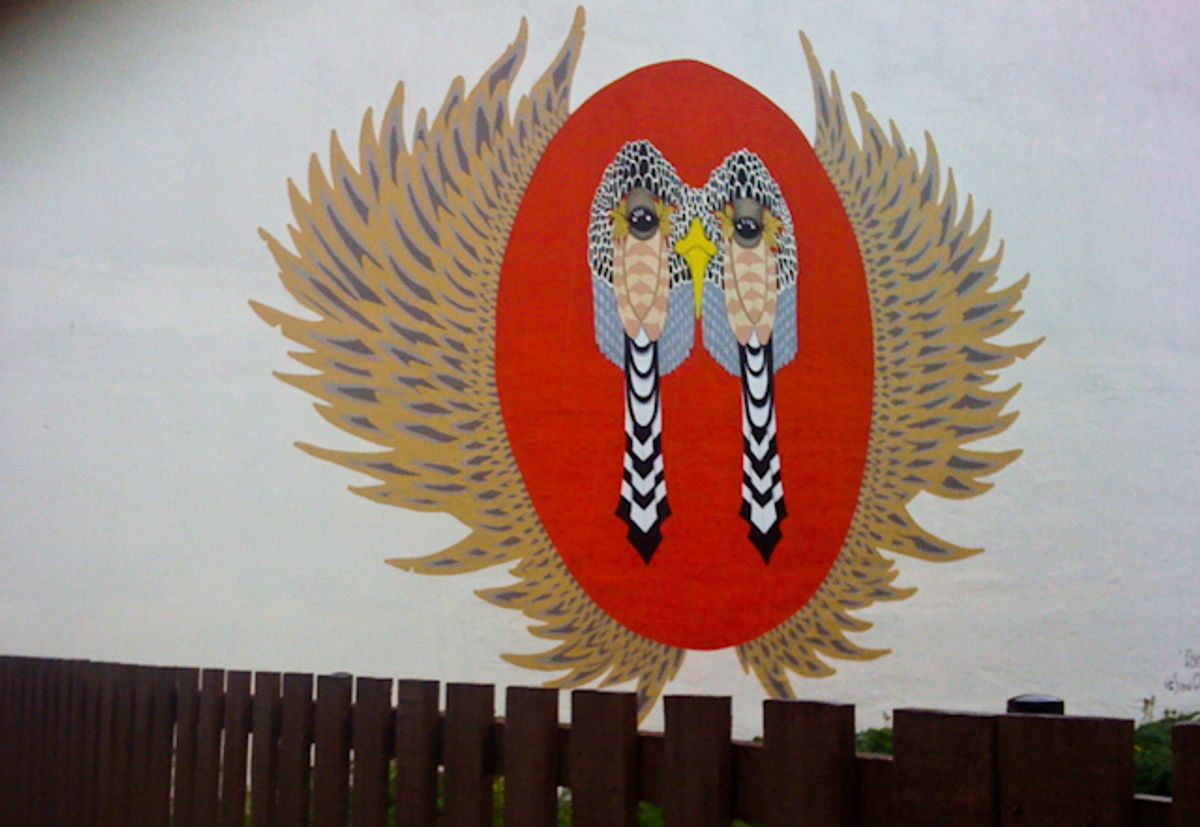 First spectacular bird sighting of the day. (all photos by the author for Hyperallergic)
--

REYKJAVIK, Iceland — While in Iceland for an artist residency for the month of August, my first stop was two nights in Reykjavik, the small country’s capital.

Although Reykjavik is by far Iceland’s biggest city, with a population of 200,000 within the greater metropolitan area, I wasn’t expecting much more than a beautiful, quiet little town. However, as I was walking to my hostel in the downtown area, the graffiti and street art quickly caught my eye.

It seemed that down every other alley, in every little hallway and behind every store there was some quality street art to be found. I definitely wanted to see the touristy things like Hallgrímskirkja, meet Bjork and walk the quaint streets, but I had a new mission; find as much street art as I could. The following images are some of the most colorful, magical and exotic creatures I saw on the back walls of Reykjavik.

This giant mural reads, “Just look at how the mountains so very mighty be sharp as razors at the top they span the land + sea but don’t forget that though majestic spires, capped in snow … From each and every grain of sand is how they grow.” And was behind a little store for a young design collective and a lovely cafe/bar with live music at night. On the top of the mural you see that they hung thousands of large sequin-like objects to make snow, and as the wind caught them the snow would ripple beautifully.

[caption id="" align="alignnone" width="640" caption="The biggest and trippiest magic-mushroom graffiti. Those are trash bins under it."]

[caption id="" align="alignnone" width="640" caption="Monkey and aliens, as well as signs of street artists London Police and Above."]

Pictured above is the center of the Reykjavik graffiti scene. Between Laugavegur, Hverfisgata, Klapparstigur and Smidjustigur streets in downtown Reykjavik this is my new favorite public space in the world. Every evening (although it is bright out this shot was taken around 11pm) kids of all ages would come. A DJ usually set up, older kids usually drank and smoked pot, some young kids danced to the music and played with chalk, some talked and some were digging some sort of skate ramp. It felt like a fun, open and artistic place truly for the youth of Reykjavik. Even while I was in town for two days some of the graffiti had changed. The following images are all from this park.

[caption id="" align="alignnone" width="640" caption="City with a giant robot that looks like Bender from the animated TV series Futurama."]