Immigrants will save us 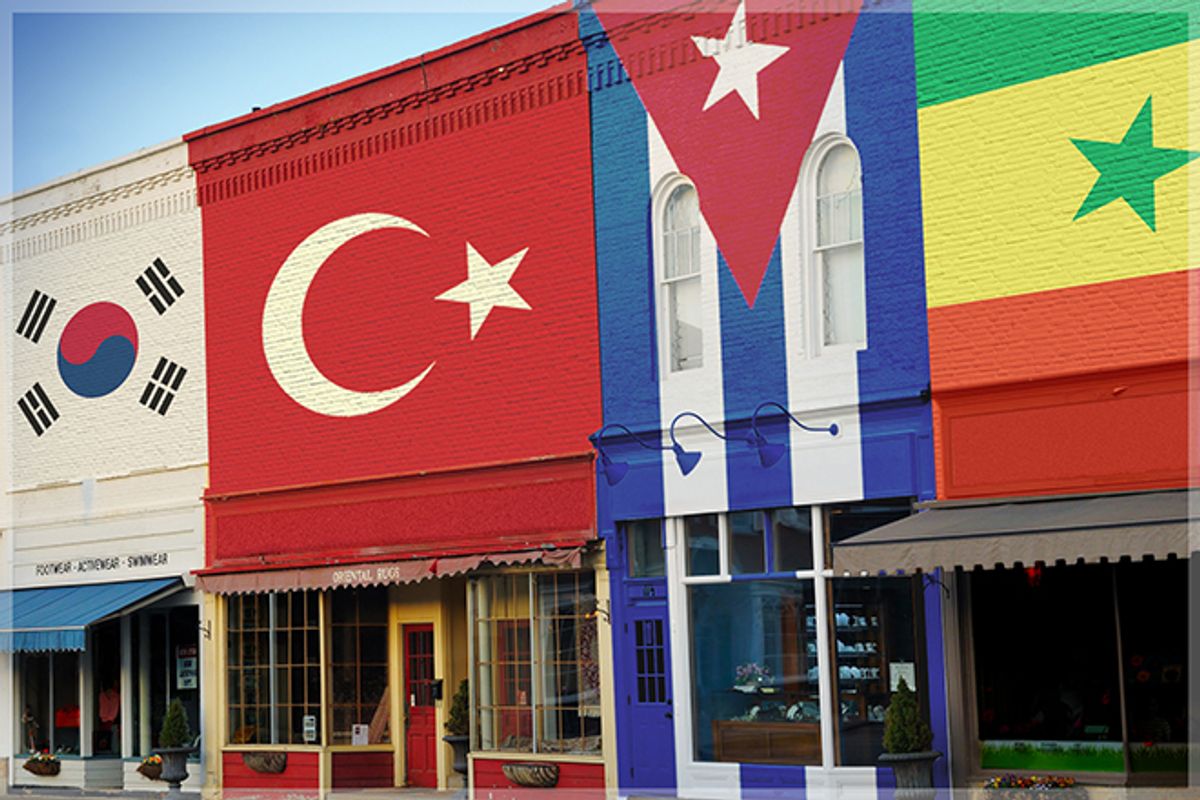 File this under My Parents Were Awesome: In 1974, nearly 40 percent of women owned at least one wig. Whether this was a fashion win, well, that's a judgment call.

But it was certainly a win for Korean-Americans, who, when the craze began in the 1960s, quickly set up shop and started importing cheap wigs from factories back home. They moved to Chicago's South Side to sell Afro wigs to the black community. In Los Angeles, wig entrepreneurs rehabbed a depressed section of Wilshire to create Koreatown. By the early '70s, synthetic hair was South Korea's third-biggest export, and in some U.S. cities, 90 percent of the booming wig market was controlled by Korean immigrants, whose businesses -- which would eventually grow to include other clothing and accessories -- revitalized entire neighborhoods that, thanks in part to a boost from fake hair, still thrive to this day.

Can cities manufacture that sort of immigrant-sparked stimulus? Last week, the Washington Post reported on Baltimore's efforts to attract 10,000 new immigrant families within a decade -- not just doctors and engineers, but low-skill, low-education immigrants as well. Dayton, Ohio, is trying something similar with the Welcome Dayton plan, which will aim to make the city more alluring to immigrants, regardless of their skills or education level. "We've got a city that was hit really hard by the loss of manufacturing jobs," says Dayton city manager Tim Riordan. "The past hasn't exactly worked out, so we figured, let's give it a try."

Courting such residents is an unusual tactic in the era of "They took urr jobs!" But there's evidence to suggest that, in certain cities, it could work -- particularly cities like Dayton, whose business improvement district lost 92 businesses in the first five years of the new century.

According to a study by the Fiscal Policy Institute, immigrants are slightly more predisposed to create their own businesses. Since the recession, that's become even truer -- twice as many immigrants started their own business than native-born Americans last year. Occupied storefronts not only expand the tax base, they spark on-the-street activity. "It's not the bodegas themselves that are so important, it's the overall dynamic of creating an area that's appealing," says David Dyssegaard Kallick, who leads FPI's Immigration Research Initiative.

And, like the Korean wig impresarios, immigrant businesses create links to far-flung countries. "If you have a Haitian neighborhood you start to see Haitian beauty supplies in the drug stores," says Kallick. "Immigration opens up a wider world that can translate into exports and global connectedness. You certainly see that with places like Miami," America's unofficial ambassador to Latin America for half a century. Thanks in part to a Latino influx that began in earnest in the 1950s, the city associated with boob jobs and beach bunnies is also now America's third-largest international banking center.

Baltimore and Dayton aren't shooting that high, at least not at first. In fact, Baltimore's plan is being framed chiefly as a way to just get more residents to move to the city, which has lost one-third of its population since 1950. Depopulation is the kiss of death for cities because so many urban services are collectively used (a street with half as many residents is still just as many streetlights to keep lit). But Kallick doesn't think that just flooding a city with immigrants will magically turn it around. "I think it's virtuous to remove barriers so people can succeed, but I'm skeptical that just getting another 100,000 immigrants to move to Detroit would solve the city's problem."

That's almost certainly true; immigration needs to be part of a larger recovery plan. And there's not much historical precedent for what Dayton and Baltimore are cooking up. In 2000, then-governor of Iowa Tom Vilsack launched an initiative to get more immigrants to move to that state. In a decade, Iowa's hispanic population nearly doubled, which tempered population declines in many of its counties. What Iowa wasn't counting on was the recession. "With an unemployment rate of two percent, there will not be enough workers to allow many new businesses to open," the New York Times reported in 2000. Today, not enough workers would be an envious problem to have.

Other examples suggest that the deeper a city's crisis is, the more that immigrants have the potential to help it. One study reported in the journal Cityscape found that in Los Angeles in the 1980s, the average immigrant family cost the city more than it contributed, consuming $1,638 in services each year but generating only $1,172 in revenue. But in the same decade, immigrants flowing into New York helped stabilize the city, which was losing U.S.-born residents fast. Research by famed housing expert Louis Winnick showed that the population growth caused by immigrants kept city services afloat -- their subway tokens, for instance, helped avert painful transit cuts. The difference? New York was in a far deeper crisis than L.A. in the '80s, and losing more residents.

That may make New York a better archetype for a city like Baltimore or Dayton. And Riordan, for one, has seen that immigrants can, in some cases, be more than just another taxpaying seat-filler. In 2003, Catholic Social Services sent 11 families of Ahiska Turk refugees to Dayton. Not exactly the creative class, but Riordan says the effect on the city was net-positive. "In their culture, it's considered important to buy a house. So they started buying up houses in bad neighborhoods for $10- or $15,000 and fixing them up. We knew people who were buying one window at a time," he says. Now there are 400 Ahiska Turk families in Dayton, and the city recently sold them its underused community center, which the Turkish government chipped in $3,000 toward. "I'm 66 years old. I've heard the discussions about foreign aid and the people bitching about it," says Riordan. "I never thought I'd be a recipient of it."

As for whether low-skilled immigrants are "takin' urr jobs," research shows that in the long term, they're not. While "there are winners and losers in the short run," ultimately, "immigration increases the scale of the economy, but it needn't change the unemployment rate," writes Albert Saiz, a professor at the University of Pennsylvania in his 2003 report "The Impact of Immigration on U.S. Cities." Think of it this way: If you doubled the population of the United States, writes Saiz, there would be twice as many workers, but also twice as many consumers -- the two cancel each other out.

The data from various studies support this, but one historical anecdote illustrates it brightly: the Mariel Boatlift of 1980, in which 125,000 Cubans landed in Miami en masse. As an example to study, it's a valuable controlled experiment because it was precipitated by events in another country (Cuba's decision to allow emigration from the port of Mariel), not economic factors in the U.S. Department of Labor economist David Card studied the effect of the Boatlift on Miami and found that, despite the low-skilled workforce increasing by over 7 percent, the city quickly absorbed it.

What's more, immigrants are good citizens. Economists Kristin Butcher and Anne Morrison Piehl have found that male immigrants are incarcerated at a rate two-thirds less than native-born Americans -- especially remarkable, considering that immigrants tend to be poorer than natives, and lower incomes usually correlate with higher crime rates. "Our best guess is that those people who choose to immigrate have some particular motive to succeed," says Piehl, and that deportation risks make penalties more severe. Increased immigration has also helped urban neighborhoods become less segregated than they used to be.

But maybe the most interesting thing about these plans to inject cities with immigrants is how different they look from the Starbucks-and-wine-bar image of revitalization. While Milwaukee creates a sparkling new waterfront district, Cincinnati maps out a streetcar line and Detroit courts a Whole Foods (all worthy endeavors), injecting a city with people who don't necessarily speak fluent English or have a high school diploma fills a different niche. The Cityscape report notes that immigrant businesses often locate in underserved neighborhoods, and that such businesses tend to cluster in economic sectors -- small grocery stores, nail salons, laundromats -- serving residents for whom revitalization often means displacement.

In the end, as Kallick pointed out, immigration alone won't turn a city around. But paired with other, big-ticket economic boosts, it could be part of a multi-pronged effort. "Both things are happening," says Riordan. "Our attitude is, if some company with 5,000 people is going to move here, great. But I look for building from the ground up."