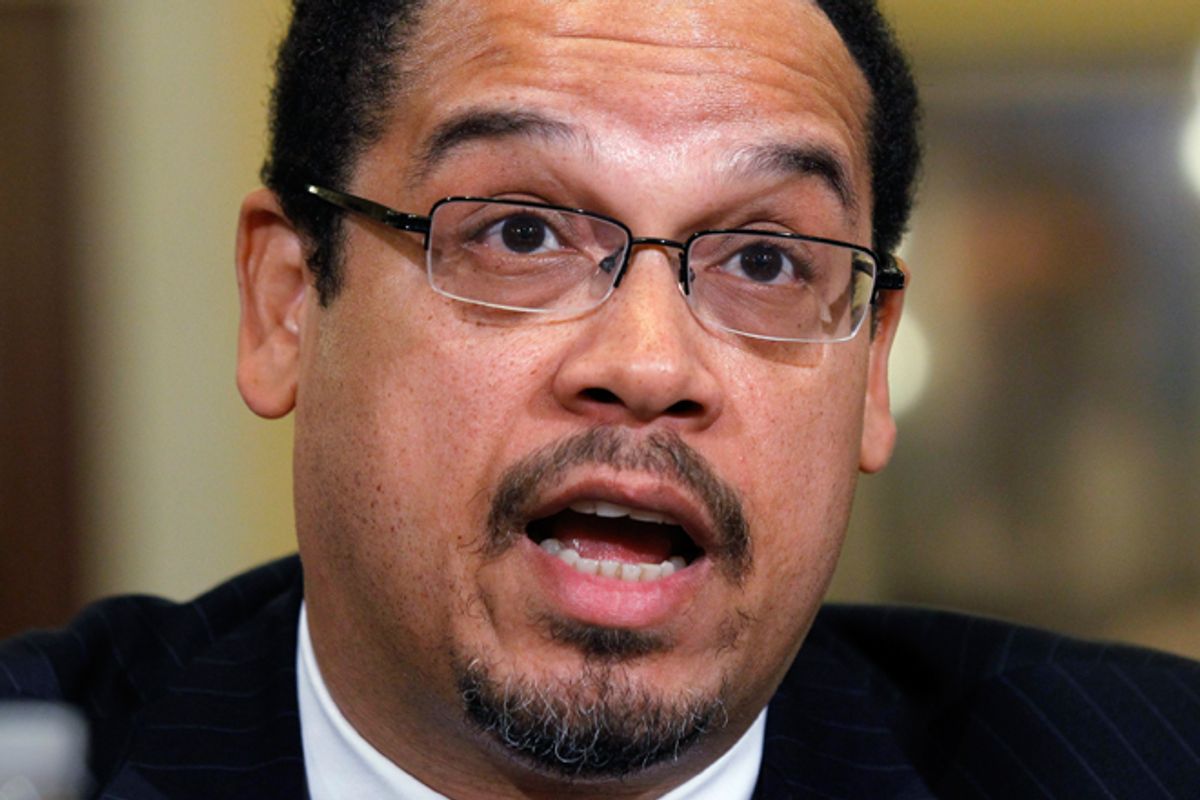 Rep. Keith Ellison, a Democrat from Minnesota, has been leading the charge against fellow Minnesota Rep. Michele Bachmann's Muslim witch hunt. The first Muslim elected to Congress, Ellison has now had his own loyalty to the United States questioned. He speaks with Salon about his motivations for the fight, Bachmann's $1 million fundraising haul and why he's optimistic that Americans will fight Islamophobia.

Why did you decide to take on this issue?

I just thought it was galling, absolutely. That she would make unsupported allegations of disloyalty and subversion against a person who’s a decent civil servant and person. But it wasn’t always Huma Abedin. I mean, she’s kind of the poster child of this thing, but one of the other people mentioned by name is a guy named Mohamed Elibiary. He’s a fellow who worked hard on interfaith dialogue. He’s a Muslim religious leader, but he traveled to Poland with Hannah Rosenthal, who was the special envoy to combat and monitor anti-Semitism, and visited Auschwitz. He came back and made it his personal mission to speak to Muslim congregations against anti-Semitism and Holocaust denial. And so this is the kind of caliber of person he is. And then Michele is going to just trash him? I just think that it’s wrong. And I said, you know, I’m just not going out like that. I actually didn’t want to stick my nose out, but then I felt like, if I don’t say something about it, who is going to?

Was that because not only are you right next to her -- your districts touch each other -- but you're also the first Muslim elected to Congress, so you're sort of the only man for the job?

Well you know, here’s the thing about me being the first Muslim elected to Congress. That really wasn’t why I did this. I mean, I pray that if she had said, let’s do this thing on the Jewish community or the Buddhists or whatever, I hope I would do the same thing and say, "you prove that." You prove that these people are part of some extremist group. It happens to be that I’m in the same group as the people affected, but I hope that that’s not what made me want to step up. I mean, look, if people in an affected group are the only ones who will ever say anything, our world is going to be sadder and poorer for it. You know, I’ve had to sit back and watch crazy allegations go by. So maybe I’m slightly more sensitized because of who I am, but it really wasn’t why I jumped out there.

By now, we’ve had John McCain, John Boehner, Mike Rogers and others in the GOP publicly condemn her. Would you like to see them do more?

Well, it would depend on what that "more" was. I want to be grateful for what they have done. I think that it’s not easy to criticize your own, which made McCain such a brave guy when he did that. Because he knew they were going to attack him for that. And they have. You know, some fool is trying to recall him.

Some former government officials and academics are circulating a letter calling for Bachmann to be replaced on the House Intelligence Committee. Would you join that effort?

Well, I don’t know that I would join it. What I would do is concede that these are very intelligent, seasoned people who need to be listened to. I would say that if you have a collection of people who have been at state and spent time in the Foreign Service and spent time in the intelligence community, it would be our mistake not to carefully consider their views. And if they think that what she did is jeopardizing U.S. interests abroad, then I don’t think it’s wise to just sort of dismiss it as a political position, because it’s not. I’ve have the letter, and there’s this one quote:

The United States government spends significant resources in the Muslim world working to combat various conspiracy theories, such as the claim that the U.S. government has engineered the electoral success of the Muslim Brotherhood in Egypt. By promoting these conspiracy theories, these members of Congress are undermining U.S. policy in the region.

What’s your reaction to the news that she raised $1 million in the past month?

Well, I’ve got a few facts that I think are instructive. One is, if she was genuinely concerned about deep penetration by the Muslim Brotherhood into our government, there are people to talk to about that. She’s on the Intelligence Committee. She could relay that information to the CIA, the NSA, the FBI, the Treasury. There’s a whole host of federal law enforcement and investigative agencies that could handle this. But she didn’t do that. She actually sought out public attention for what she did. And at the same time, she sent out a fundraising letter on this issue. So you put those things together and you gotta wonder what it was all about.

Since you’ve gotten involved in this, she’s now gone after you personally, accusing you of being connected to the Muslim Brotherhood. How does that feel? Or are you kind of used to baseless accusations? Is it just to be expected?

Well, for the record, I am not [laughs]. I did know that it was a distinct possibility. I mean, if you go back and look at the era of American history when Joe McCarthy and Roy Cohn and all those guys were making allegations about who was a communist, one of the reasons that it took a while for people to challenge them is because they feared the investigation would turn on them. So that’s what made Edward R. Murrow such a courageous figure. I mean, you have no doubt they would have accused him. So that’s always the risk when someone is making these kind of unfounded allegations of disloyalty and subversion. You know, it’s like if you say there are no witches, “oh well, you must be a witch.” I kind of figured it would get back around my way, but I was prepared for that.

Do you hope now, with the amount of attention this has gotten, that it will help sensitize people or the media to the fact that Islamophobia is a real problem?

Yeah, I hope this issue will help sensitize people in the media to the fact that there is a well-documented anti-Muslim cottage industry. And it’s lucrative. There are people running around offering themselves as counter-terrorism experts and everything else. The whole "Ground Zero Mosque" is contrived by this group. The Center for American Progress wrote a pretty comprehensive report about this called “Fear, Inc.” It basically showed that a handful of foundations funnel money to about five guys who then create messages that are propagated by another group of people. And then they’ve got their friends in Congress like Michele, Peter King, Sue Myrick, Trent Franks -- not a lot of them, but enough of them. If it wasn’t sad, it would be funny.

But look, in the course of American history, different groups have been targeted for persecution, and our country has always risen to say that it’s wrong. I mean, [in the past,] there was a lot of anti-Catholic sentiment in this country. There’s no doubt about the anti-Semitism in this country, and people [once] felt pretty comfortable doing it. I mean, as late as 1970 there was some guy collecting a list of all the Jews in the Nixon administration. I mean, it’s almost inconceivable that he would do such a thing, and your average nice person wouldn’t believe it, unless you could prove it, because it’s that crazy. Let’s not forget the Japanese internment. These things can metastasize; they can grow cancerously. Unless you say something about this, these things will grow; they’ll fester.