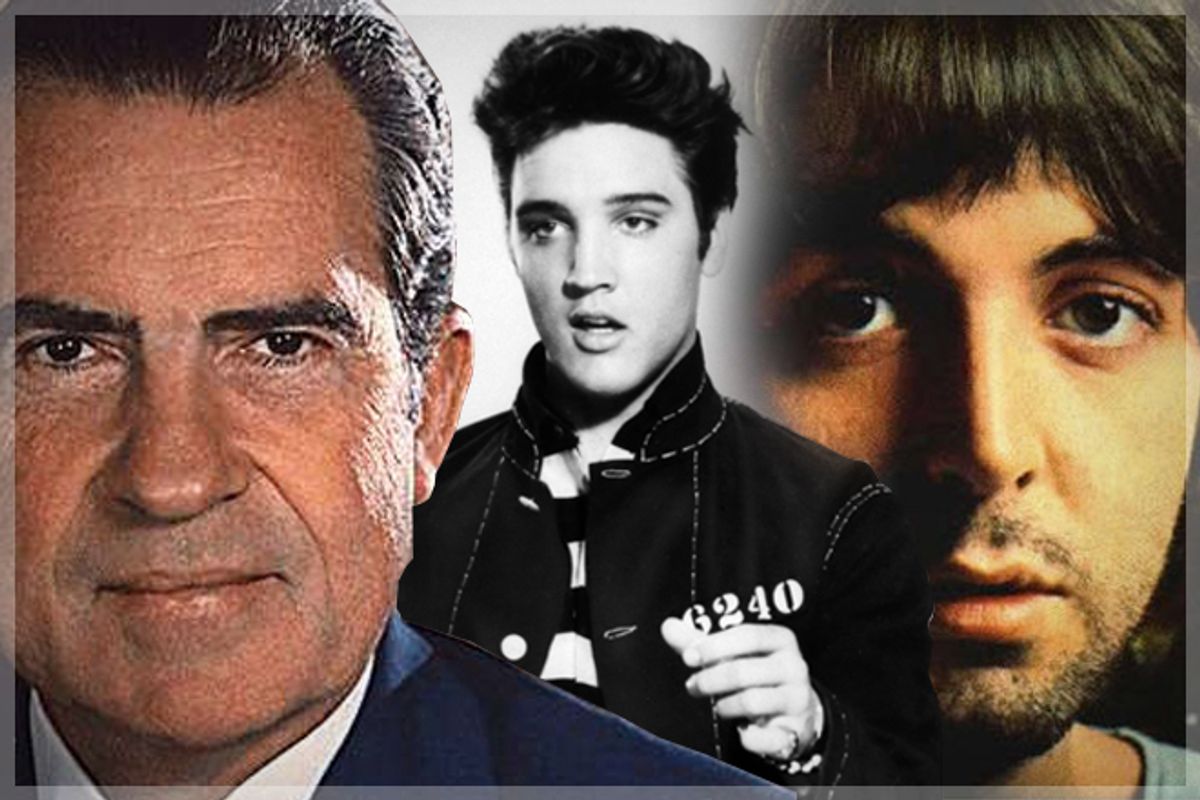 This article is an excerpt from the upcoming book "Hello Goodbye Hello: A Circle of 101 Remarkable Meetings," available Aug. 7 from Simon & Schuster.

As 1970 nears its end, Elvis Presley is riddled with worries about assassinations, anti-war protests, a lack of respect for authority, and the prevalence of drugs. His paranoia about the abuse of drugs by young people is exacerbated by the quantity of drugs he himself consumes.

Shopping proves a reasonably effective method of allaying his fears about everything else. He particularly enjoys buying guns, cars and jewelry, not just for himself, but for friends and employees, and sometimes total strangers. Over the course of three nights he spends $20,000 on guns at Kerr’s Sporting Goods in Memphis; the following week, he buys two Mercedes, one for himself and another for a girlfriend; the week after, he buys a third Mercedes for an aide, plus a new Cadillac as a wedding present for a Palm Springs patrolman with whom he has struck up a friendship.

When his father first warned him that he was spending too much, Elvis tried to calm him down by buying him a Mercedes. But on December 19th, his father and his wife Priscilla confront him: his spending is getting out of hand.

Presley takes it badly; it is his money, he says, and he can do with it what he likes. ‘I’m getting out of here,’ he shouts. Without telling anyone where he is going, he flies from Memphis to Washington, from Washington to Dallas, then on to Los Angeles, where he has arranged to be met by his new driver, an Englishman called Gerald Peters.*

He then takes the next flight back to Washington. In flight, he writes the following letter:

Dear Mr President,
First, I would like to introduce myself. I am Elvis Presley and admire you and Have Great Respect for your office. I talked to Vice President Agnew in Palm Springs three weeks ago and expressed my concern for our country. The Drug Culture, the Hippie Elements, the SDS, Black Panthers, etc. do not consider me as their enemy or as they call it The Establishment. I call it America and I love it. Sir I can and will be of any service that I can to help the country out ...

He asks to be made a Federal Agent at Large. ‘First and foremost I am an entertainer but all I need is the Federal credentials.’ He has, he adds, pursued ‘an in depth study of Drug Abuse and Communist brainwashing techniques ... I would love to meet you just to say hello if you’re not too busy.’ On another piece of paper, marked ‘Private and Confidential’, he lists his various phone numbers.

At 6.30 a.m., Presley drops off his letter at the White House. Later that morning, he receives a phone call at his Washington hotel. It is Egil ‘Bud’ Krogh, deputy counsel to the President, wondering if he would drop by in forty-five minutes.

The senior staff at the White House, including the President’s chief of staff, Bob Haldeman, feel that, in view of Nixon’s poor standing among the young, it would be ‘extremely beneficial for the President to build some rapport with Presley’.

Elvis Presley arrives at the White House in full make-up, wearing a large brass-buttoned Edwardian jacket over a purple velvet tunic with matching trousers, held up by a vast gold belt. A necklace and a gold pendant hang from his neck. Though slightly put out when asked to hand over the chrome-plated World War II Colt .45 he has brought as a gift for the President, he strides confidently into the Oval Office at 12.30 p.m. and proceeds to present President Nixon with two signed photographs. He then spreads his collection of police badges over the Oval Office desk for him to admire. The two men speak about Las Vegas and young people.

Elvis launches into a passionate diatribe against the Beatles: they have come to America and taken American money, then gone back to England to foster anti-American feeling.

‘I’m just a poor boy from Tennessee. I’ve gotten a lot from my country. And I’d like to do something to repay for what I’ve gotten,’ says Elvis.

‘That will be very helpful,’ replies Nixon, cautiously.

Elvis senses the moment is right to ask the President for a Bureau of Narcotics and Dangerous Drugs special agent badge.* The President looks a little uncertain, turns to Krogh and says, ‘Bud, can we get him a badge?’ Krogh is unsure of the correct response. Does the President want him to bluff it out? ‘Well, sir,’ he answers, ‘if you want to give him a badge, I think we can get him one.’

The President nods. ‘I’d like to do that. See that he gets one.’

Presley is overcome. ‘This means a lot to me,’ he says. He pulls Nixon to him and hugs this least tactile of presidents to his chest. Nixon pats Presley briskly on the shoulder. ‘Well, I appreciate your willingness to help, Mr Presley.’

Managing to extricate himself from Elvis Presley’s embrace, he takes a step back.

‘You dress kind of strange, don’t you?’ he says.

‘You have your show and I have mine,’ explains Elvis.

Elvis Presley returns home, badge in hand, in such a state of triumph that he buys a further four Mercedeses as Christmas presents. His wife later claims he only wanted the badge so he could transport all his prescription drugs and guns without being arrested. But he will use it for other purposes, too: as a fully-fledged FBI special agent, he sometimes flashes the blue light on his car to pull motorists over for speeding, or to offer assistance at road accidents.

The negotiations have been fraught. The Beatles idolise Elvis, and long to meet him. In turn, Elvis resents the Beatles, and blames them for stealing his thunder.

Over the past year, Elvis’s manager, Colonel Tom Parker, has been trying to orchestrate a meeting, but his client has been dragging his heels. Until last April, Elvis had not achieved a Top 10 single since 1963, the very same year the Beatles took off. The Beatles’ only two movies, A Hard Day’s Night and Help!, have been huge successes, while Elvis’s movie career is in the doldrums: his last, Tickle Me, set in a beauty parlour, made no impact at all.

Beatlemania, on the other hand, seems to know no bounds. On their last American tour, tins of Beatles’ breath sold like hot cakes in New York. After the Beatles have passed through Denver, dirty linen from their hotel beds is cut into three-inch squares, each square mounted on parchment, to be sold for $10 a square inch. The Beatles are the talk of the country, even the world. ‘I like your advance guard,’ President Johnson greets the British Prime Minister Sir Alec Douglas-Home on his arrival at the White House on February 12th 1964. ‘But don’t you think they need haircuts?’

In the spring of 1965 things begin to perk up for Elvis. His old recording of ‘Crying in the Chapel’ climbs to No. 3 in the charts in America and No. 1 in Britain. With the playing field levelled, negotiations can recommence. In early August, Colonel Parker and Brian Epstein sit in the Colonel’s office in New York on chairs made from elephants’ feet, and, over pastrami sandwiches and root beer, they reach an agreement: Elvis will meet the Beatles, but only on condition that they come to him.

Elvis is staying in a Frank Lloyd Wright house he rents from the Shah of Iran. On their way there in a Cadillac, the Beatles quell their nerves by smoking a couple of joints. They arrive giggling. ‘We all fell out of the car like a Beatle cartoon, in hysterics, trying to pretend we weren’t silly,’ says George. They are led into the presence of Elvis, who is sitting on a sofa, playing a Fender bass, watching the television with the sound turned down. He is dressed in tight grey trousers and a bright red shirt, surrounded by bodyguards and hangers-on. On the jukebox is ‘Mohair Sam’ by Charlie Rich. ‘He just played it endlessly. It was the record of the moment for him,’ says Paul. On the mantelpiece there is a sign saying ‘All the Way with LBJ’.

The wives and girlfriends in his entourage have taken care to hide their excitement at the prospect of meeting the Beatles. They have no wish to upset Elvis. After a while, the two managers peel off: the Colonel has uncovered a roulette wheel inside a cocktail table, and Brian Epstein is a keen gambler.

The Beatles can’t think of a word to say. They just look straight ahead, finding it hard to adjust to being in the same room as the King. ‘Wow! That’s Elvis!’ is all Paul can think. They are impressed, however, by the way Elvis can change channels on his television without moving from his seat. They have never seen a television remote control before.

‘Look, if you guys are gonna sit here and stare at me all night, Ah’m gonna go to bed!’ says Elvis. ‘Ah didn’t mean for this to be like the subjects calling on the King. Ah jist thought we’d sit and talk about music and maybe jam a little.’

John Lennon asks if he is preparing for his next film. ‘Ah sure am,’ says Elvis. ‘Ah play a country boy with a guitar who meets a few gals along the way, and ah sing a few songs.’ The Beatles are not sure how to respond, but Elvis breaks the ice by laughing. This is, after all, the plot of all his films. Ringo goes off to play pool with Elvis’s friends. Later, he describes them as sycophants. ‘Elvis would say, “I’m going to the loo now,” and they’d say, “We’ll all go to the loo with you.”’

George shares a joint with Elvis’s spiritual adviser and hairdresser; the same man combines both roles. They discuss Eastern philosophy. Some members of the entourage find it hard to distinguish one Beatle from another. One of them solves the problem by addressing each of them as ‘Hey, Beatle!’

Meanwhile, guitars are produced for John and Paul, who strum their way through some of the Elvis numbers they used to play in their Cavern days. Elvis continues to lounge on the sofa, playing his bass. ‘Coming along quite promising on the bass, Elvis,’ jokes Paul. In a break from the music, John performs a medley of Peter Sellers voices, which Elvis appears to enjoy. But he seems to bristle when John asks him why he no longer plays rock-and-roll. ‘I loved those Sun records,’ John adds.

After a couple of hours, the meeting draws to a close. Elvis sees them to the door. They invite him over to their house in Benedict Canyon, and he appears to accept. The Colonel gives the four Beatles souvenirs of their meeting, little covered wagons that light up when you push a button. As the Beatles leave, John shouts, ‘Long live the King!’

The following evening, Elvis’s security guards come over to Benedict Canyon to check out the house. John Lennon asks one of them to tell Elvis, ‘If it hadn’t been for you, I would have been nothing.’ He tells another, ‘Last night was the greatest night of my life.’ Perhaps he senses that they have failed to make a good impression, and Elvis will not be making a return visit. Sure enough, he never arrives, and none of the Beatles ever meets Elvis again.

‘It was great, one of the great meetings of my life,’ recalls Paul, forty years on.