I wanted to use Holley Mangold and Missy Franklin to inspire young girls to work hard. Why wouldn't they listen? 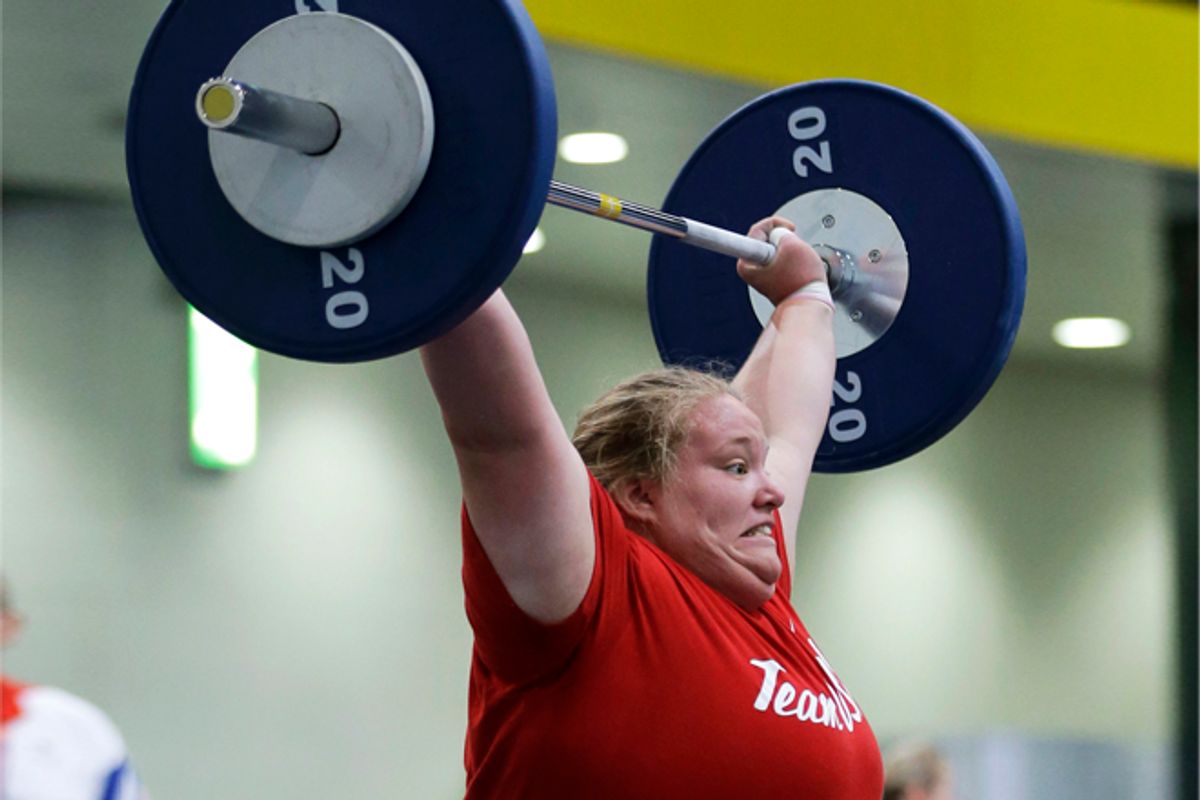 Weight-lifter Holley Mangold, of the United States, trains in preparation for the start of the 2012 Summer Olympics (AP/Hassan Ammar)
--

In the P.R. campaign leading up to the 2012 Olympics, Ryan Lochte’s coach, Matt De Lancey, said, “I’ve worked with some tough athletes. There’s none tougher than Ryan. He’s not afraid to throw up.”

Okay – disclaimer. I’m totally afraid to throw up. I have two young daughters and the fear of stomach flu rules my life. But I always get chills when I hear an athlete or coach speak from this passionate place, state how hard they are willing to train and compete — particularly when this kind of comment comes from a woman. I’m motivated by conviction and intensity, athletic or academic, but I grew up in the South thinking I wasn’t allowed to feel that way about anything other than, well, God and ACC basketball. I only discovered this intensity in myself when I got serious about writing a few years ago, when I finally gave myself permission to try harder at the vocation I loved. I have a quote from Beryl Markham (or her ghostwriter) pinned to the bulletin board in my office: Never hope more than you work.

I used to be that girl who blushed when she spoke in class, or didn’t speak at all. Even though I loved sports, I turned scarlet when I felt people watching me. Looking back on prior athletic pursuits, I’m still struck by a sense of dissatisfaction: Why didn’t I just try harder? So now, when the stack of edits comes back from the copywriter, when a drafted character falls flat on a reread, when a fictional scenario demands more research, when my editor hints at a deadline, I think to myself: less hoping, more working. I’m not saying I always work as hard as I should. I don’t. But I’ve learned that being a debut author requires a certain amount of hustle and thick skin, and, well, trying. Really trying.

In other words, I approved a last round of edits for my collection in the hospital after I gave birth. I took late trains out of Penn Station after book tour events to be home in the morning for my two kids. I signed up for public events that made me nervous. I gave up a corporate and then a teaching job to focus on writing. I’m not afraid to throw up.

Lately I don’t feel as though I’m competing with other writers as much as competing with myself and the promise of distraction. I’ll harness whatever it takes to block out Facebook, blast mediocre sentences and push myself to create more, edit better. Thus I’m addicted to the quotes from women who push themselves toward goals, especially athletes. So when a local girl’s camp asked me to speak as a role model to a group of 13-year-olds, I looked to the au courant Olympians to help me drive home the message of hard work. I wanted to paint the picture of what it feels like to slog through failure, sacrifice and years of training just to produce one book, one victory, one killer Amanar vault like McKayla Maroney. I wanted to cure these hopeful, young writers from dreams of a quick win, a self-published bestseller, an easy road to publication.

Olympians are a study in determination and single-mindedness. They maintain a physical existence in a digital world, an uncanny ability to focus and push past walls, test thresholds. Lolo Jones trains for the 100-meter hurdles, an event that lasts for roughly 30 seconds, using nearly 40 reflectors and a complex data analysis system. Chinese swimmer Yi Shiwen says she has swum five hours a day for nine years. Holley Mangold, who can clean-and-jerk 145 kilos, sleeps on a twin bed in her agent’s laundry room. Maroney has been practicing her Amanar vault since she was 13 years old. This dedication and sacrifice, this passion, reminds me not just of other athletes but of artists; think of Flaubert’s meticulous research for "Sentimental Education" or Bouvard and Pecuchet, Joyce’s dire financial situation as he labored over "Finnegans Wake," or Madeline Miller’s 2012 Orange Prize-winning "Song of Achilles," which took her 10 years to write.

This week, to prepare for my talk, I began collecting quotes that had moved me in recent Olympic coverage, certain I could reach the newly minted teens with sports metaphor and establish clear connections between results and hard work. Some of my favorites are below:

I think of some of the great writers I know who read two books a week, who edit one story for years with tireless precision, who dwell over the shape of a paragraph, the song of a sentence, the laser-like perfection of the right word. If I could give these girls anything, I wanted them to understand, or to be reminded of, the beauty of hard work. I wanted them to get hungry like Kerri Walsh-Jennings, to take a black eye and play harder like Abby Wambach.

So today, chin in the air, feeling as though I had information that would help these girls succeed not just in writing but in life, I approached the school building. Then, I realized I was too excited. I had my hopes up. I felt ready to overshare, to tell them all of my secrets like Liz Lemon unhinged, namely that I was wearing Spanx underneath my dress, that they didn’t need boys, and that all the fun happens in college.

I walked into the classroom where the summer camp was being held. Brightly colored crafts lined the walls. The girls looked at me as they finished their lunches. I looked at them, and immediately realized my notes, prepared with the zeal of a perfectionist, would be useless. These girls were cute, smart, plucky, distracted by pudding and carrot sticks, and ate me alive with their eyes. Two of them were knitting. I could see that they were restless in the warm classroom, and so much less interested in me than I wanted them to be.

I’m not afraid to throw up, I thought.

Hi, I said, with significantly less inspirational swagger than I had planned.

I’ll paraphrase the discussion that ensued:

Is your book like "The Hunger Games"? one asked.

Not really, I said. It’s a collection of —

Do you write about people you know?

Sometimes, I said. Who wants to write a book in here? Show of hands.

Roughly two-thirds of the girls raised their hands. There was some mumbling. Someone passed a note.

OK. Who here is a big reader? I asked.

Could you write a story about a mermaid? someone said, interrupting.

Yeah, her friend said. The mermaid lives under the sea and her kingdom is in trouble.

Tension is good in a story, I said. Things should get bad, and then worse. But what you need is character change.

My dad grew up poor, I said. He started working in tobacco fields at 14. I’ve always felt strongly about work —

And the mermaid could have another friend who is secretly a mermaid! another said.

To summarize: I lost and gained my audience 100 times in one hour. I broke a sweat. I opined about overusing adjectives and sheepishly waved goodbye. I failed.

My teacher says to use a lot of describing words, one said.

I would buy your mermaid book, another called after me as I left.

I walked to my car wondering what had just happened. I was spent. I felt like a guest on the Colbert show, where despite my best intentions, the conversation had been hijacked, and I was left still wanting to impart a critical message on my audience.

But this is, again, the problem with dreaming. I was reminded of the quote I’d come across by the U.K.’s Paula Radcliffe, an injured marathoner who was forced to withdraw from Olympics competition on her home turf: “The downside (of running) is that it can break your heart and spirit many times over when your body is simply unable to match what your heart and brain want it to do.”

Sometimes, girls, you will set out to write the Great American Novel and you will fail. Sometimes you will try and write a Pretty Good Book and it will be Pretty Bad or Just Okay or Quite Unnoticed. Sometimes you will spend four years of your life writing a novel that will live in a drawer and then, years later, after you’ve had a glass of wine, get recycled. One day, when you are on the cusp of success, someone you love might die, and none of it will matter. Or your first book will come out and you will read things about your work that swell your heart and things that break it. Someday you might walk into a room full of girls and realize you have nothing to say, nothing that they want to hear. And you will be reminded that, yes, you are “regular,” but maybe, just maybe, you work your way into special.

I hope, if even just two of those girls set out to write a book, they do so with the ferocity of Maroney staring down the vault, the tenacity of Missy Franklin cranking out a killer finish on her last lap, the grace of Jordyn Wieber managing a strong team performance after missing out on the individual gymnastics medal that was hers to lose. And as I stare down my first novel, or prepare for another classroom of teenagers, I hope I do too.