Marlen Esparza is my idol

I'm a middle-aged mom, but the boxing dynamo is teaching me the thrill of hitting like a girl 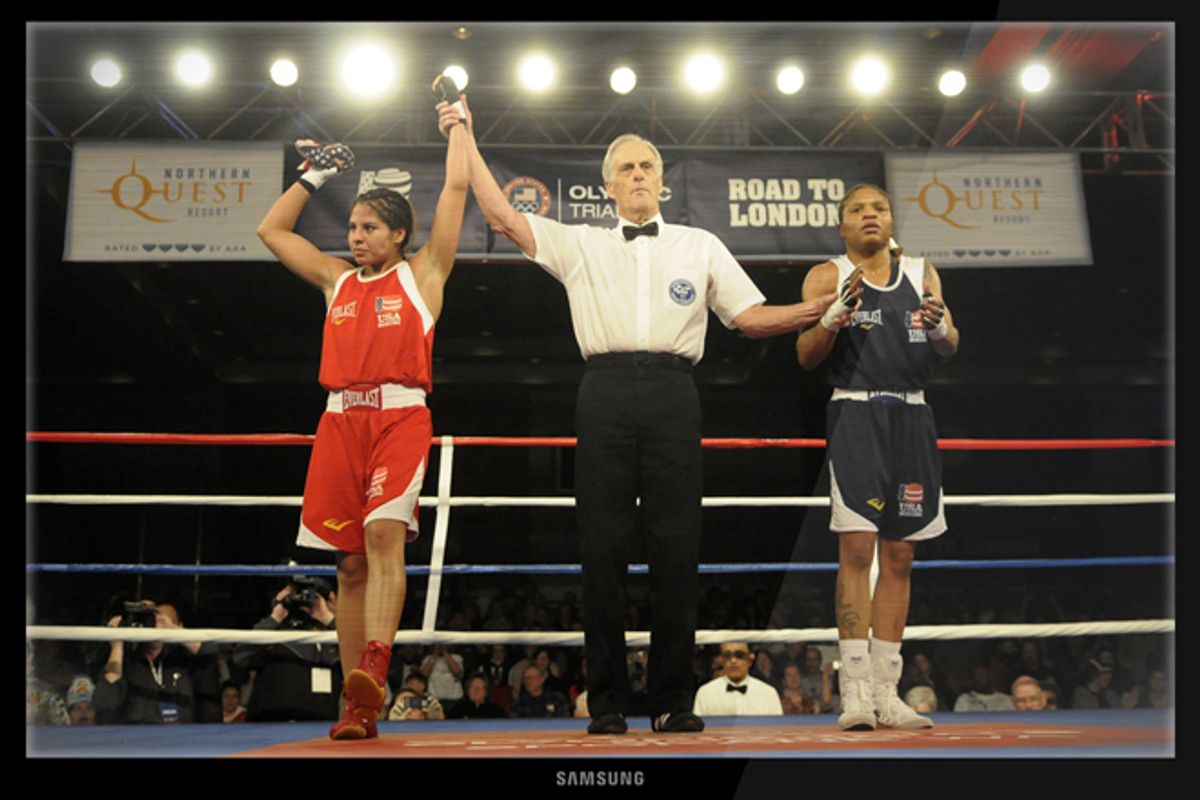 It's been some time since I've had an idol, and by “some time” I mean the days when I woke up and kissed Shawn Cassidy's face on the cover of Tiger Beat. Luckily, Debbie Harry took over that role, filling my soul with a drive to create and the courage to be myself. But I got distracted by life and a few years went by – say, 30 -- before I found myself on the verge of T-shirt-donning worship. Now, my Facebook pic has been changed to that of a young woman wearing a red gown and a wide fight stance, her jab holding an invisible opponent at bay, right fist cocked back and ready to throw a cross punch — a fast cross, a hard cross, a beautiful cross. This girl can box like demon. I worship the mat she shuffles on.

I first discovered Marlen Esparza on a CNN special called “In Her Corner.” I watched it and then watched it again, crying through the whole thing. Marlen is from Houston, Texas, and she is part of the first women's Olympic team in the first year that women’s boxing is an Olympic sport. She's hit me in the solar plexus. I just love watching her train. Man she's fast. Pow, pow, pow, pow! Sounds like a machine gun.

What she does is not easy, and I should know. I started boxing two years ago. The mainstream classes at my gym were fine, but they didn’t cut it for me. I needed something scarier, something dirtier, something that brought me to the edge of my capability. It used to be ballet for me – focus, focus and sore feet every day. Then there was yoga, which introduces you to muscles you didn’t know existed. But I needed a new challenge. So I went to a class at my gym taught by a boxer and cagefighter, and the class was so hard and wild, the conditioning so deep and intense, I'd be sore for days afterward. When that guy left my gym, I followed him to the boxing gym where he taught every day.

It was love at first jab-cross-hook-cross. I’m not a bruiser. At 5’3”, I’m the same size as Marlen. Small and compact. But I love the straight-forwardness of the sport: No cute outfits, no make-up, no giggling. You need to leave all your crap at the door, and the time it takes to wrap up your wrists is all the time you have to let go of the "to do" list. That year was one of the most intense of my life: I had a young child and not enough help. Sometimes I felt like I was living in a "Road Runner" cartoon. But that changed in the gym. Sometimes I could feel the power of a hook, driving it from the ground, pulling on my hip.

For a while, I flailed around like an egg noodle with those big gloves on my hands. But in time, I stopped hitting like a spastic caveman. I learned to trade power for speed, and I ended up with both, my entire body and mind engaged in one movement: Hitting through the target, learning how to throw a punch, practicing how to snap that jab. It was a thrill beyond words.

When you watch Marlen Esparza work with her trainer Rudy Silva, it's like watching a Zen monk walk through the woods. She is one with her environment. There is no monkey mind interfering with her activity. She is her jab. She is her jab cross. She has disappeared into the art of boxing.

I watch her and am determined to do one thing a day with that much focus and clarity. I am a yoga instructor, and sometimes I am lucky to get even five minutes a class where my mind isn't conducting a three-ring circus -- I forgot to pay the water bill, my kitchen is disgusting, my son’s school is not right for him, I think I need glasses. I know how to breathe. I know how to be still. I know a lot. Still, the mind pecks at me from the inside like a woodpecker too early on a Sunday morning.

There aren’t that many women in class – and far fewer are middle-aged moms like me. But when you’re surrounded by that much muscle and sweat and grunting, it’s easy to feel like a girl. My favorite classes are at noon, when all the fighters come -- guys who used to fight, are training to fight, or want to fight. The energy is high, the music is loud, and the room smells like man. There are about 30 bags hanging from the ceiling, and I get there about five minutes early to get my favorite bag near the front. Or I seek out the best guy in the room and stand next to him, keeping my penis envy in check when I hear the sound his glove makes when he hits the bag. If there's a pro or ex-pro fighter in there, you'll find me in my old yoga pants standing at the bag right behind him. One ear is listening to the instructor, the rest of my body is focused on the fighter in front of me. I lose myself, my weight, my sex, my fear, my arthritis. I fuse with his energy.

Maybe it's the dance training, but I'm a good mimic. I'll notice how he rolls his shoulder, how he keeps his elbow up for the hook, how he keeps his glove by his temple as the other one strikes. This is a life lesson, but it’s certainly true in boxing: Learn from the best people in the room. Get out of your own way.

There’s so many self-defeating thoughts that can pummel you in those moments, especially the ones that come to mind in a gym -- the “too old, too fat, too tired, too hungry, too short to box" thoughts that work hard to sabotage my one-hour class. It takes some inner mastery to release that garbage so I can box. And when I can find stillness and clarity of mind, it is like sitting on a mountaintop. People think of boxing as a rough-and-tumble sport, but boxing with all I've got allows me to let go of myself. It's all about wringing out the mind.

This coming week, you can bet I'll be watching Marlen. I don’t know why I feel such a fever for this girl. Maybe it’s because we are looking at the same spot on the bag. Maybe because she puts me in touch with the fiercest part of myself. Fierce like a mama lion focused on a herd of zebras. But I can’t wait to watch history unroll before my eyes. I'll be a mess, I’m sure. Weeping like a ’tween at a Justin Bieber concert, like a cougar at a “Twilight” premiere, like a little leaguer meeting Mickey Mantle. Marlen Esparza is my idol. I'll be worshipping the sweat on her brow.

Ondine Galsworth is a New York native now living in Hoboken with her five-year-old son, her dog, her cat and her common-law partner. She is a regular contributor to Babble and Nerve.