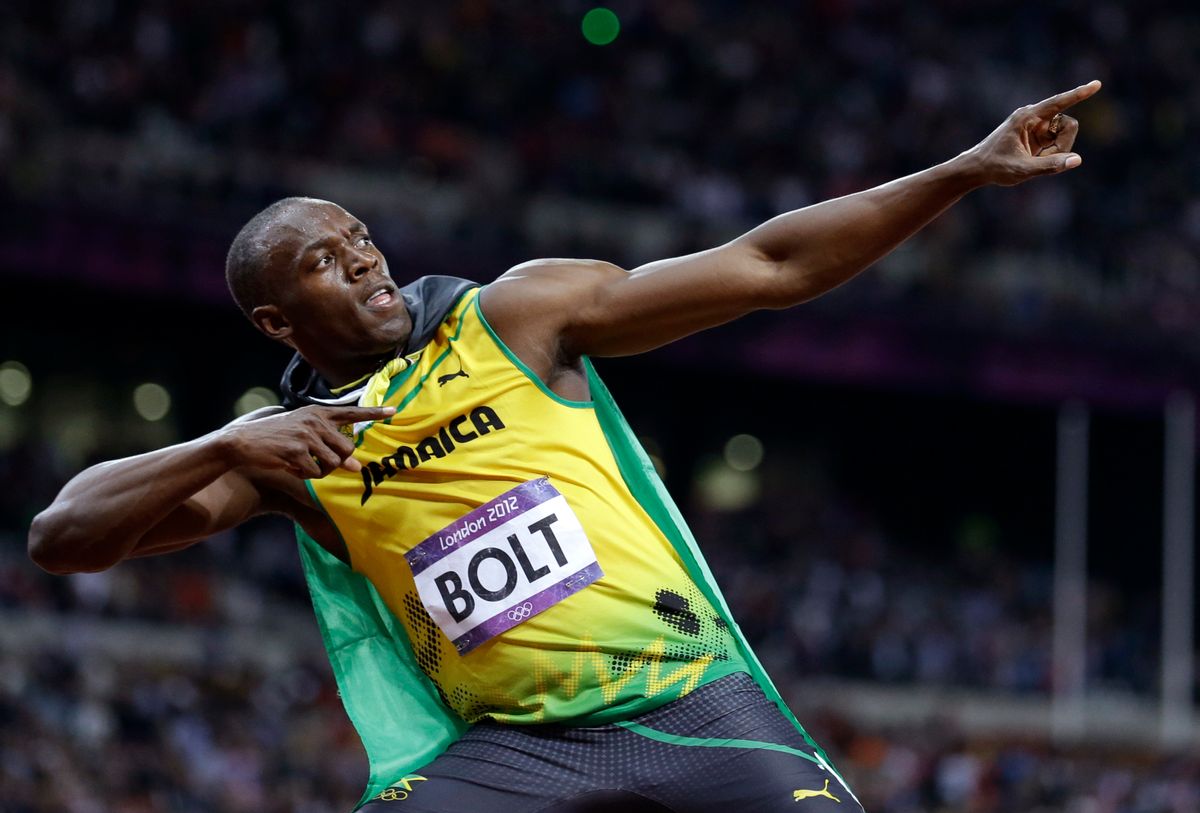 Years from now, millions of Americans, including myself, will remember exactly where we were when Usain Bolt won the 100m in London in 9.63 seconds -- the second fastest time in history. We were in front of our TVs watching horse jumping (on NBC) and women’s volleyball (on MSNBC).

The 100m final is, traditionally, the glamour event of the Olympics, the marquee race of the games. That was especially true this time with Bolt, who dazzled in Beijing, looking to become just the second man in Olympic history to win consecutive gold medals in the event. (Carl Lewis is the other.) And the greedy, calculating bastards who run NBC decided everyone in the U.S. should watch horses jumping over obstacles while the fastest man in the world won his gold -- so they could make more money by running it in prime time.

Memo to Bob Costas: I like the way you took on the International Olympic Committee, especially during the  opening ceremonies when you held your own moment of silence in memory of the Israeli athletes slain in Munich after the IOC head refused to do so. Please don’t think I’m equating the outrage over this with Munich. But if you’re looking for an issue that has millions of Americans on one side of it -- and no one but a handful of suits on the other -- well, an estimated 2 billion people around the world watched Bolt’s fantastic performance live, and none of them were in the U.S.

I suppose it’s wrong to lead with a complaint instead of a rave about how amazing Bolt is, but I wouldn’t be doing it if  it wasn’t so disappointing and frustrating to have to wait four hours after the fact to see him in action – after you knew how it came out. It’s been that way ever since Bolt came out of nowhere – or more precisely, out of Jamaica, which in the running world at that time amounted to about the same thing – to become the greatest sprinter in the world. With the Beijing Olympics, the era of American domination in the 100m came to an end with a flash.

Before then, the event had produced some of the greatest American Olympic legends – Jesse Owens, “Bullet” Bob Hayes, Carl Lewis, Maurice Greene. But in the past four years, Jamaica has won seven of the last eight men’s and women’s sprinting medals. What’s in the water? (We know what’s in the air, but that slows people down.) A nation with less than 1 percent of the population of the United States has become a virtual sprinting dynasty,

Bolt himself suffered from a string of injuries over the past couple of years – probably not a few of them caused by a much-publicized car wreck – but apparently both on track and in cars Bolt lives in the fast lane. Usain is now 25 years old, and if he decides not to compete in four years in Rio, I’ll bet there’s a  NASCAR sponsor waiting for him.

NBC’s Brian Williams said it best Sunday night: “When Andy Murray defeated Roger Federer for the gold earlier today, he popped the cork on a bottle of champagne the size of Great Britain.” It’s a toss-up, I guess, as to whether Jessica Ennis’ gold in the heptathlon or Murray’s thrashing of Federer was the greater British victory. One imagines that this might be the pleasantest pub argument of the summer for Brits.

I would guess that Ennis’ victory was the greater win because of the weight of expectations that followed her into the games. As someone in the Sun put it before her first event, the 100m hurdles: “Would Britain’s Olympic poster girl shrink beneath the hopes of millions?” I don’t think anyone really expected Murray to beat Federer at Wimbledon last month, so the disappointment was not so severe when Federer soundly whipped him.

Which is why Murray’s spectacular butt-kicking of the world’s top-ranked tennis player – 6-2, 6-1, 6-4 – sent Brits into fits of ecstasy of the kind that foreigners think is downright uncharacteristic. As a British spectator interviewed by an NBC reporter explained, “It means more that Andy beat him today, with the gold medal on the line, than if he’d beaten him at Wimbledon.” And what would explain such a shocking turnaround in one month? Clearly Federer just could not bring to the match the level of concentration and the stamina required just a month after Wimbledon, while Murray was energized by his countrymen.

The victories of Ennis and Murray combined with two gold medals in rowing – confirming the country's status as the world’s preeminent rowing nation – made this the greatest Olympic weekend in British history. As a fan reclining on a Union Jack beach towel put it, “You know, if you consider the number of our medals compared to our population, we are No. 1 per capita!” Would that fit on a bumper sticker?