Ryan Lochte: So sexy, so dumb

Do we hate Ryan Lochte because he's beautiful -- or because he exposes our own shallowness? #Jeah! 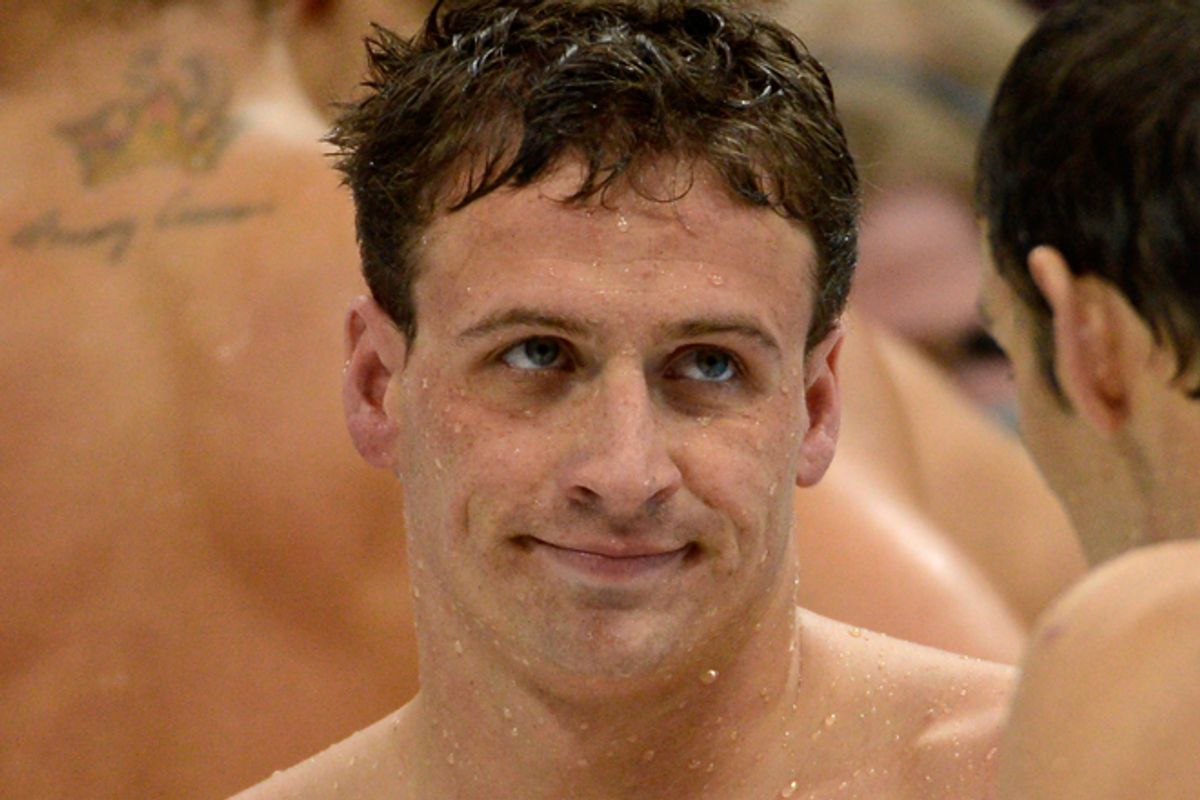 Ryan Lochte has managed to eclipse the celebrity of his torso. Not through stunning athletic prowess, mind you, but gold-medal-worthy douchebaggery. With the help of his $25,000 red, white and blue diamond grill and surfer-bro, oft-hashtagged catchphrase of "Jeah," the celebrated pinup boy of the 2012 games has been transformed into a joke the size of an Olympic swimming pool.

Jezebel has enumerated the top 10 reasons he's "America's Sexiest Douchebag" ("he calls himself a 'rock star,'" "he's fratty as fuck"). New York magazine compiled some of his most memorable tweets, including philosophical gems like, "Always reach for the moon cuz if u slip up u will still be a star!! #Jeah," and horrific misspelling like, "Rocks, paper, siccor........ ." Complex magazine concocted a parodic slide show titled "Ryan Lochte's Guide to Looking Like an Olympic Douchebag" (tip numero uno: "Beanies are perfect 24/7. They're like a swim cap, but you know, for land"). And BuzzFeed put together a video of his finest head-scratching interview moments (the standout: "What defines me? [Thoughtful pause] Ryan Lochte").

The man appears to have less self-awareness than the fictional male models of "Zoolander." (One can actually picture him saying, with no sense of irony, “That Lochte is so hot right now.”) His hip-hop modeled self-aggrandizement and bro-y apathy makes for a confounding mashup of ugly masculine stereotypes. Is there anything less attractive than arrogance paired with ignorance?

But here's the thing: Lochte's ego, tackiness and poor spelling are not all that remarkable. Plenty of Americans think "scissor" is spelled "siccor." Lots of people think custom shutter shades, popped collars and self-referential slogans are legitimately awesome. What's exceptional is the dissonance between the golden idol and sex god that he was hailed as in the lead-up to and beginning of the games and the gleeful mockery he inspires today.

He opened his mouth and we were surprised not to find the sound of angels singing. Despite the prevalence of dumb jock and pretty-but-stupid stereotypes, we are quick to exalt the physically talented, to assume that such bodily brilliance permeates a person's entire being. We are so in need of idols that we take them literally at face value. Like a desperate single, we readily project our fantasies onto even the most marginal of candidates. (I would know. Ba-dum-ch!)

And so, while there is certainly envy in the vitriol directed at Lochte, it seems there's also a degree of self-hatred over our own superficiality. There's a defensiveness to the mockery, a telling joy in the takedown. His American flag grill is silly, yes, but not any more so than our inclination to take his prettiness, or even his extraordinary athletic ability, as a sign of much more. He may be the Internet's latest meme, but the joke is on us.