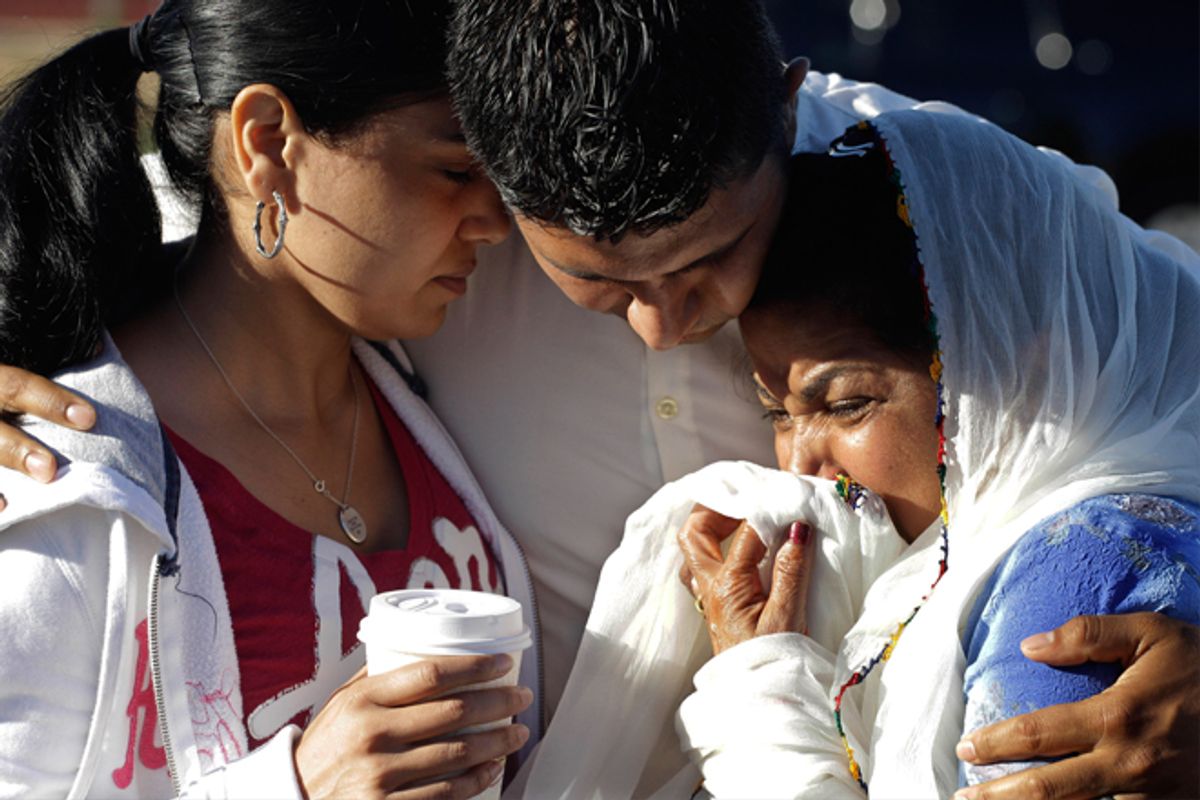 Amardeep Kaleka, son of the president of the Sikh Temple of Wisconsin, center, comforts members of the temple on Monday. (AP/M. Spencer Green)
--

While it’s still too early to jump to any conclusions about the tragic shooting at a Sikh temple in Wisconsin yesterday that left seven people dead, including the gunman, and others, including a police officer, wounded, some information has emerged about the shooter. The FBI has taken over the incident and is treating it as a potential case of domestic terrorism, though they've been careful not to publicly speculate about motives. The assailant has been identified as Wade Michael Page, a 40-year-old Army veteran who was honorably discharged in the late 1990s. Page’s landlord said the suspect was a bit of a loner, and that he recently broke up with his girlfriend, but that he cleared a background check and thus likely did not have a criminal record.

The Southern Poverty Law Center, which tracks extremist hate groups, described Page as “a frustrated neo-Nazi who had been the leader of a racist white-power band.” According to the SPLC, Page had been in several white supremacist bands in Colorado and Wisconsin, and told a white nationalist website in 2010 that his goal was to “figure out how to end people’s apathetic ways” -- the name of his band was End Apathy (they have a Myspace page here, with a photo of a man the SPLC identifies as Page). Dave Wiegel has more on his music.

Indeed, ABC News reports that two sources said the shooter was "heavily tattooed" -- including one relating to 9/11 -- and that investigators suspect he may be a "white supremacist" or a "skinhead.” "It is being investigated. And what his tattoos signified is being investigated. They are all pieces of a possible puzzle to learn what was his motive in carrying out such a horrific act," Bureau of Alcohol, Tobacco and Firearms Special Agent Thomas Ahern told the network.

The shooter reportedly used two semi-automatic handguns. So far, it’s assumed he purchased the guns legally. And while there’s no evidence that a recent change in Wisconsin's gun laws had any effect, the massacre comes not long after the heated gubernatorial recall campaign, where debates over gun policy played a central role. As Mother Jones notes, almost exactly a year ago, Gov. Scott Walker signed the Personal Protection Act (PDF), a law that for the first time allowed Wisconsinites to carry a concealed gun with a license, something Page likely would be eligible for, if current reports hold true. The NRA aggressively campaigned for Walker, running an ad suggesting Democrat Tom Barrett would take away hunters’ guns. (Politifact called the NRA's claims "mostly false.")

Interestingly, there are more restrictions on realistic toy guns than real guns under Wisconsin law. “No person may carry or display a facsimile firearm in a manner that could reasonably be expected to alarm, intimidate, threaten or terrify another person,” state law stipulates, defining a facsimile firearm as “any replica, toy, starter pistol or other object that bears a reasonable resemblance to or that reasonably can be perceived to be an actual firearm.” Meanwhile, it’s completely legal to display or carry a real firearm, as long as other regulations are followed.

UPDATE: The Anti-Defamation League's Center on Extremism, which also tracks extremist groups, confirms what the SPLC had reported and adds that Page sometimes went by the pseudonym "JackBoot" and that his band was affiliated with the Hammerskins, "a longstanding hardcore racist skinhead group with a history of violence and hate crimes." He played at several white supremacist music festivals with the group. In a press release, the ADL added that Page "is festooned with white supremacist tattoos, including a Nazi Death’s Head tattoo and a Hammerskins tattoo."