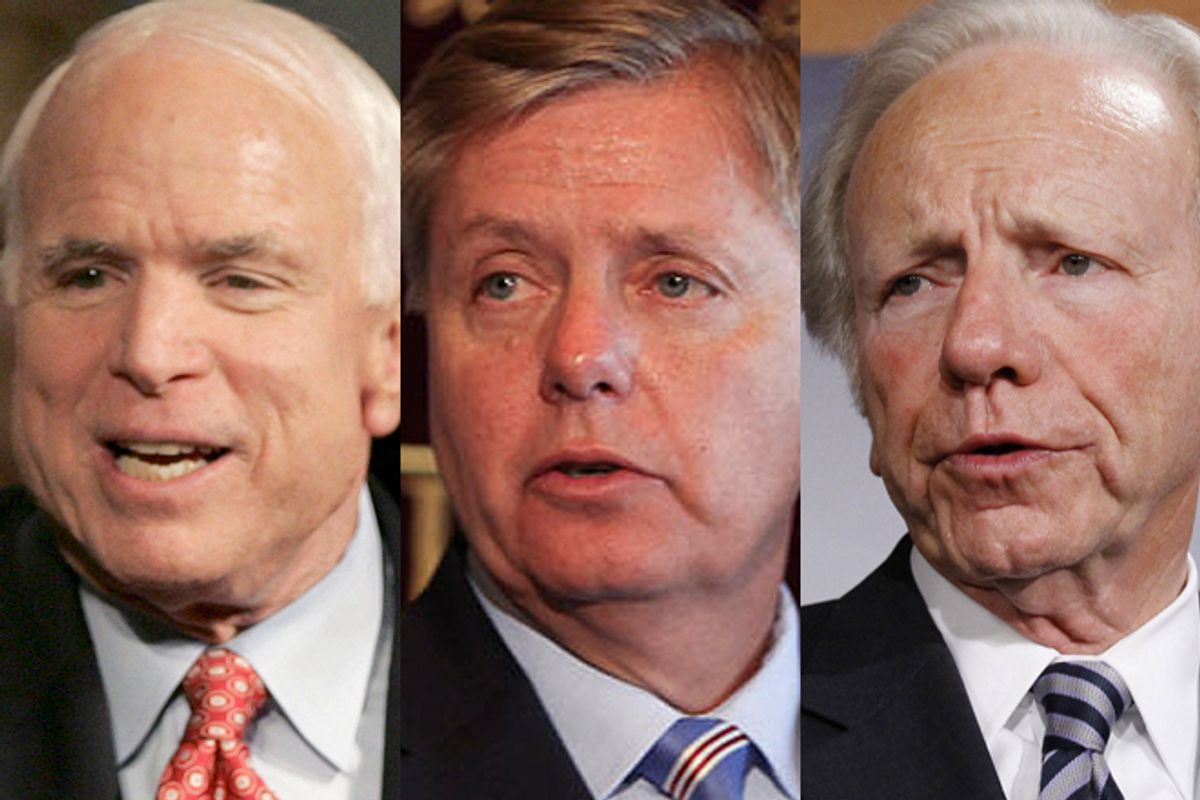 The three amigos of death are back with a hot new Washington Post joint editorial, and you'll never guess what they're recommending this time! (War.)

This time, they would like us to intervene in the deadly civil war raging in Syria, where rebels are fighting the forces of brutal strongman Bashar al-Assad. The administration is in favor of the removal of Assad, and has offered the rebels non-military assistance, but it has been reluctant to actually send arms or troops. McCain, Graham and Lieberman would obviously like to change all that. It is time for "active involvement on the ground in Syria," you see, and "we can and should directly and openly provide robust assistance to the armed opposition, including weapons, intelligence and training." That's well and good, but isn't something missing?

Ah, wait, there it is, in the second-to-last paragraph:

Second, since the rebels have increasingly established de facto safe zones in parts of Syria, the United States should work with our allies to reinforce those areas, as Secretary of State Hillary Rodham Clinton suggested last week. This would not require any U.S. troops on the ground but could involve limited use of our airpower and other unique U.S. assets.

There you go. That means bombs! We definitely need bombs.

The best part of any McCain/Lieberman/Graham editorial is when they say "we know the risks of [MORE WAR EVERYWHERE]" and then they just never actually say what the risks are because they don't actually ever care about the risks and downsides of military intervention:

We know there are risks associated with deepening our involvement in the profoundly complex and vicious conflict in Syria. But inaction carries even greater risks for the United States — in lives lost, strategic opportunities squandered and values compromised.

Maybe you agree with the liberal interventionist case for greater U.S. involvement in the fight, as argued by Anne-Marie Slaughter and others. Maybe you think in the wake of the failure of Kofi Annan's mission, there's a better case to be made for acting forcefully to remove Assad. Maybe your opinion has changed as the conditions have changed, like a responsible thinking person.

But with McCain, Graham and Lieberman, the actual facts on the ground, the details of this fight, don't actually matter at all, because McCain, Graham and Lieberman were calling for bombs and arms five months ago -- before Kofi Annan's assignment even commenced -- and they're calling for bombs and arms now and they'll keep calling for bombs and arms everywhere as long as there are still newspaper editorial sections and Sunday morning political chat shows. If they accidentally stumble upon the correct response to Syria, please stay tuned for when they turn their attention back to Iran! (And the Washington Post editorial page, which has never met an overseas military intervention it didn't declare urgent with barely concealed glee, will be happy to print whatever they come up with.)