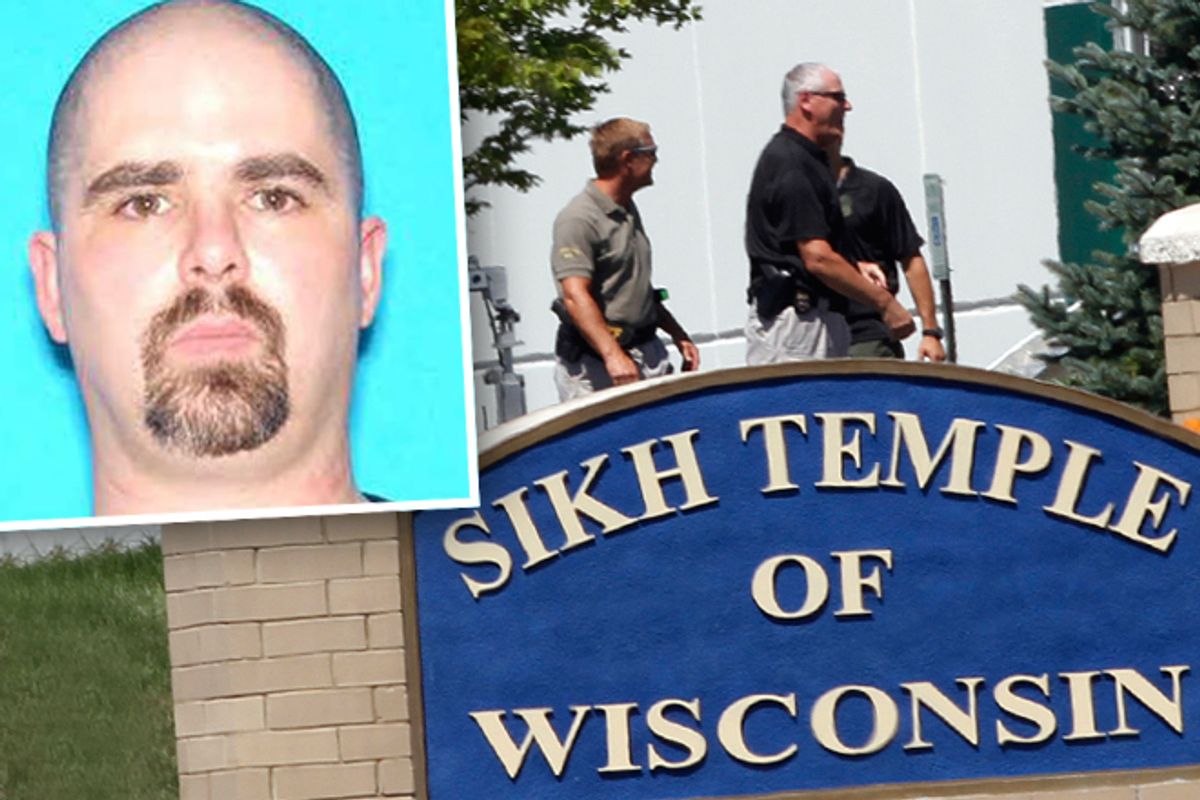 When Homeland Security director Janet Napolitano released a report in April 2009 identifying right-wing extremists as a threat to the country, conservatives howled. The general sentiment was expressed by Michelle Malkin, who declared the report a “piece of crap … propaganda … an Obama hit job.” Jonah Goldberg complained that the DHS report failed to stick “to the practice of describing these groups with more specificity and without the catchall, ideologically loaded descriptors.” Well, now that we have learned the murderer of six people at a Wisconsin Sikh temple was a well-known white supremacist, conservatives might want to consider reexamining their claims that terrorists don’t exist on the right side of the political spectrum.

Conservatives might be shocked that someone else besides a Muslim can commit an act of terrorism, but white supremacists and neo-Nazis have been recognized as genuine threats for years. FBI documents declassified in July reveal that the bureau has been worried about right-wing extremists for a long time — so many years, in fact, that many seem to have forgotten that white supremacists, who pioneered homegrown terrorism with the Ku Klux Klan, have not gone away.

The documents, which were collected by the invaluable National Security Archive and obtained partly through Freedom of Information Act requests, shed light on the problems coming from the extreme right. According to a 2004 FBI report, “right-wing terrorists pose a significant threat due to their propensity for violence” (note the FBI’s use of the term "right-wing" to define these terrorists, the phrase that so enraged conservatives when Napolitano employed it). These groups increased their recruitment efforts and rhetoric after 9/11, according to the report. White supremacists groups relied on broader anti-immigrant sentiment throughout the country to advance their efforts.

Perhaps more disturbingly, neo-Nazis were trying to infiltrate law enforcement agencies, according to a 2006 FBI report devoted to the subject. “White supremacist presence among law enforcement personnel is a concern due to the access they may possess to restricted areas vulnerable to sabotage and to elected officials or protected persons, whom they could see as potential targets for violence,” it reads. One idea far-right terrorists proposed was to walk into police stations and offer information, in order to determine an agency’s interest in any given organization.

Neo-Nazis were also pioneering a strategy they called "ghost skins," which are attempts by right-wing extremists to keep quiet about their hateful views so as to blend into society and covertly advance their causes. “One white supremacist group has reportedly encouraged ghost skins to seek positions in law enforcement for the capability of alerting skinhead crews of pending investigative action against them,” says the report.

Another report released the same month revealed more about what it calls this “fascist path of stealth.” A ghost skin deliberately avoids shaving his head, wearing boots or braces, or anything that identifies his Nazi origins. “We strive to blend into society to be unrecognizable to the Jewish enemy,” one white-supremacist website is helpfully quoted as explaining. Prospective ghost skins are encouraged to join the military and receive training that can be passed on to other Nazis.

With chilling prescience, a 2007 report argued that the threat posed from white supremacists came less from organized groups than from “individuals acting alone upon the messages of hate espoused by these groups.” According to Jeffrey T. Richelson, a senior fellow at the NSA, who edited the document collection, “From what we know about this Wisconsin shooter, this potentially fits exactly into the documents analyses.” The shooting was not very different from what was generally predicted in the FBI materials, says Richelson.

Still, despite the primary threat coming from "lone wolf" terrorists, white supremacists have evinced interest in broader campaigns of suicide terrorism, according to the FBI. “These provide the movement with an ideal of self-sacrifice and a context for individuals to put themselves into fatal situations on behalf of its causes.” Terrorist acts could unify the movement and inspire others to carry out similar acts.

Finally, a September 2007 FBI threat assessment argued that “in terms of their distribution across the United States, white supremacists are the most pervasive because the issues driving them exist throughout the country.” They maintained a ready capability to commit acts of terrorism and violence due simply to their sheer numbers. White supremacists, the FBI held, tend to commit random acts of violence against minorities rather than premeditated targets — as may be the case with the murderer at the Sikh temple.

The FBI has said that the Wisconsin shooter likely had ties to right-wing white supremacist groups. It would not be the first time the bureau has warned of the threats coming from the far right, as these declassified documents prove. And now will not be the first time conservatives deny the terrorists and extremists lying in their midst.