Getting the Carter treatment 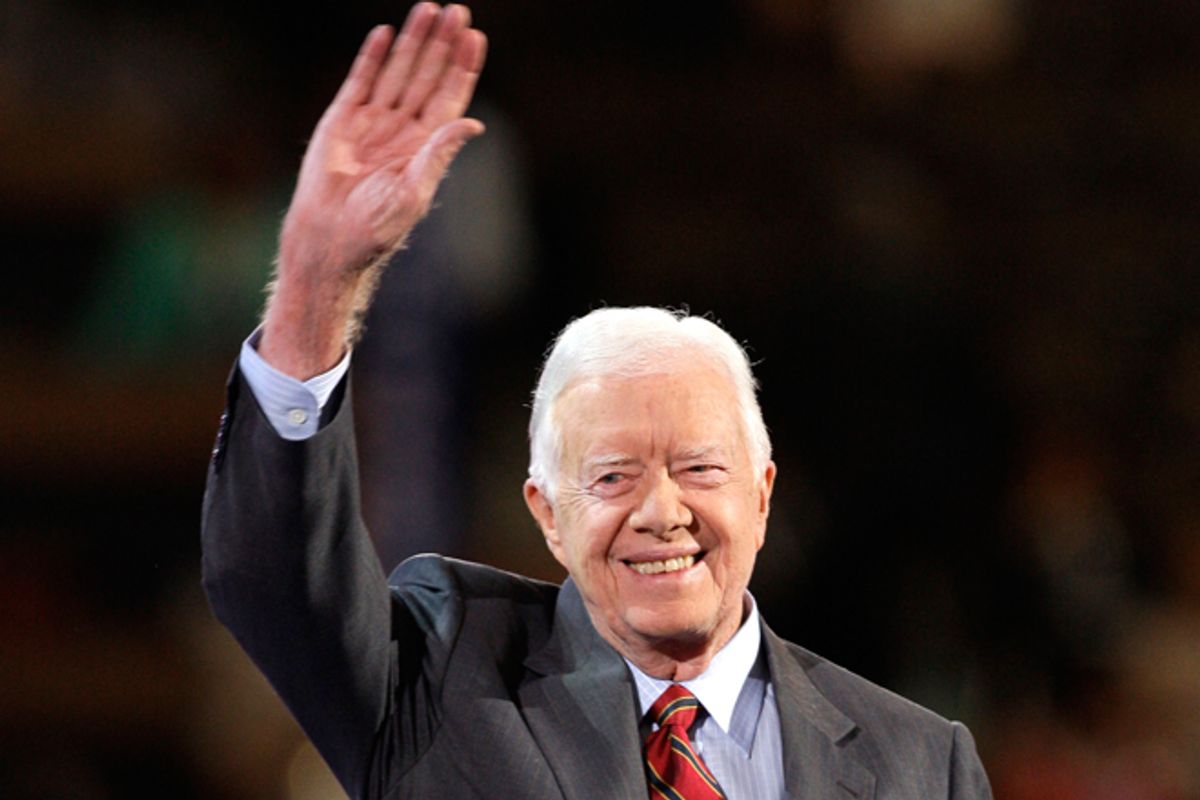 Former President Jimmy Carter waves to the crowd as he goes on stage at the Democratic National Convention in Denver on Aug. 25, 2008. (AP/Paul Sancya)
--

It was announced this morning that Jimmy Carter will address next month’s Democratic convention in a videotaped message that will be featured in prime time.

For the former president, this represents a step up from last time around, when he was pointedly denied a spot at the podium and allowed only a brief, non-prime-time video message. This led to one of the more awkward scenes from the Denver convention; while Carter and his wife walked onstage to wave to the crowd after the video, the podium was lowered into the floor – almost as if convention organizers were making sure he didn’t get any ideas.

That treatment speaks to the very up-and-down relationship Carter has had with his party since leaving the White House in 1981.

For the first national convention of his post-presidency, San Francisco ’84, he was offered prominent seating, but not much else (you can watch him at the 2:20 mark here enjoying Mario Cuomo’s keynote address). Ronald Reagan’s reelection campaign was asking Americans “why would we ever want to return to where we were less than four short years ago?” and Democrats weren’t eager to showcase the man voters had rejected in the last election. "In 1984, I was very unpopular with the Democratic Party," Carter said years later. “I had committed the unforgivable sin of losing.”

He got a better reception when Democrats convened in Atlanta in 1988; humanitarian works were quickly improving his image. And by 1992, polls actually showed Carter’s popularity eclipsing Reagan’s, thanks to an economic slump that voters blamed on the excesses of the Reagan-Bush era. That summer, Carter triumphantly returned to center stage at Madison Square Garden, delivering a prime-time speech in the same venue where he’d been nominated in 1976 and 1980.

But his freelance international diplomacy caused a deep rift with Clinton, who made it clear Carter wasn’t welcome at the 1996 Chicago convention. Four years later, he went to Los Angeles as a delegate but rejected the Gore campaign’s offer of a video message. Instead, he spoke in person to the Georgia delegation at one of its breakfasts. 2004 marked another comeback of sorts, with Carter – fresh off his 2002 Nobel Peace Prize – being called on to critique George W. Bush’s foreign policy in prime time on the Boston convention’s first night. But in the next few years, Carter became a lightning rod for controversy with his increasingly blunt embrace of the Palestinian cause, which made even some Democrats uncomfortable – hence the video message and retracting podium in Denver.

It’s hard to know what to make of Carter’s Charlotte role. On the one hand, the prime-time scheduling for the video clearly is a step up. And who knows, maybe at 87 Carter simply isn’t interested in traveling to the convention. But it’s also true that Republicans have delighted in making Obama/Carter comparisons. This probably motivates the GOP’s own base, although it’s doubtful it means anything to the average swing voter. Still, especially given Carter’s controversial status within the Democratic Party, it’s not hard to see the Obama team calculating that it would be best to keep Carter away from Charlotte. As James Hohmann noted on Twitter: “If Jimmy Carter had come to the DNC, you would have seen Team Romney link POTUS to him. They might still try. Harder with video.”

Carter’s post-White House convention experiences have produced the most intrigue of any recent former president. But the treatment each ex-president has received from his party has varied widely:

Lyndon Johnson: He knew he was dying when Democrats gathered for the only convention of his post-presidential life, in Miami Beach in 1972. Johnson didn’t like the man who would be nominated, George McGovern, and had preferred Ed Muskie for the nomination. But more than anything, as Leo Janos described in his 1973 book “The Last Days of the President,” LBJ just wanted to be there:

Sick and depressed, Johnson had hoped to attend the 1972 Democratic National Convention in Miami Beach, if only to stand up and take a bow. He needed some warmth and applause, but from Larry O'Brien and others the message filtered back that he had better stay home ...

So Johnson suffered the election in silence, swallowing his nitroglycerin tablets to thwart continual chest pains, endorsing McGovern through a hill country weekly newspaper, meeting cordially with the candidate at the ranch.

Richard Nixon: Nixon actually pulled off a remarkable one-man image rehabilitation campaign over the final 20 years of his life (although it ended up doing nothing to alter longer-term assessments of him and his presidency). But he was absent from the five GOP conventions of his post-White House years. Not that his presence wasn’t sometimes felt. In Dallas in 1984, after delegates treated Gerald Ford to a long ovation, Bob Dole said that “this is how we treat our former presidents.” This, according to a Washington Post report at the time, prompted then-Wyoming Rep. Dick Cheney to remark, “I think in four years we can bring Nixon back.”

Gerald Ford: He was voted out of the White House in 1976, but was an active participant at the 1980 GOP convention, where he spent most of the week in negotiations to be Ronald Reagan’s running mate. Ultimately, Ford balked, but he was a featured speaker at the next four conventions, delivering a prime-time address at the age of 83 in 1996. He made it to the Philadelphia convention in 2000, but suffered a minor stroke while there and left early, and was absent from Madison Square Garden in 2004, where Republicans treated him to a short, pre-prime-time video tribute. That was the last convention of Ford’s life.

Ronald Reagan: Houston ’92 was the only convention between the end of his presidency and his 1994 diagnosis with Alzheimer’s, and Reagan was the featured speaker on its first night.  Well, he was supposed to be, but Pat Buchanan, who had challenged George H.W. Bush in the primaries and was offered a plum speaking slot as a way of uniting the party, ended up knocking Reagan’s speech out of prime time.

George H.W. Bush: He was given a prime-time slot on the San Diego convention’s first night in 1996. But he essentially retired from delivering political speeches after that campaign, ceding the spotlight to his son and appearing only as an honored guest at the 2000, 2004 and 2008 conventions. (He won’t be in Tampa at all this month.)

Bill Clinton: Charlotte will be the third convention of his post-presidency, and for the third time he’ll be playing a major role. In 2004, he gave a prime-time address on the first night. In 2008, things were a little more complicated because his wife had been a candidate, but he was still given a prominent slot. And this time around, he’ll deliver the formal nominating speech for Obama.

George W. Bush: As a sitting president, Republicans had to acknowledge him somehow in 2008, but they found the most inconspicuous way possible – a videotaped address that aired just before the broadcast networks began their nightly coverage. This year, the GOP still has a Bush problem, and he’s not even going to show up.