It's hard to be more wrong on the economy than Kevin Hassett. So why is he in Romney's spin room? 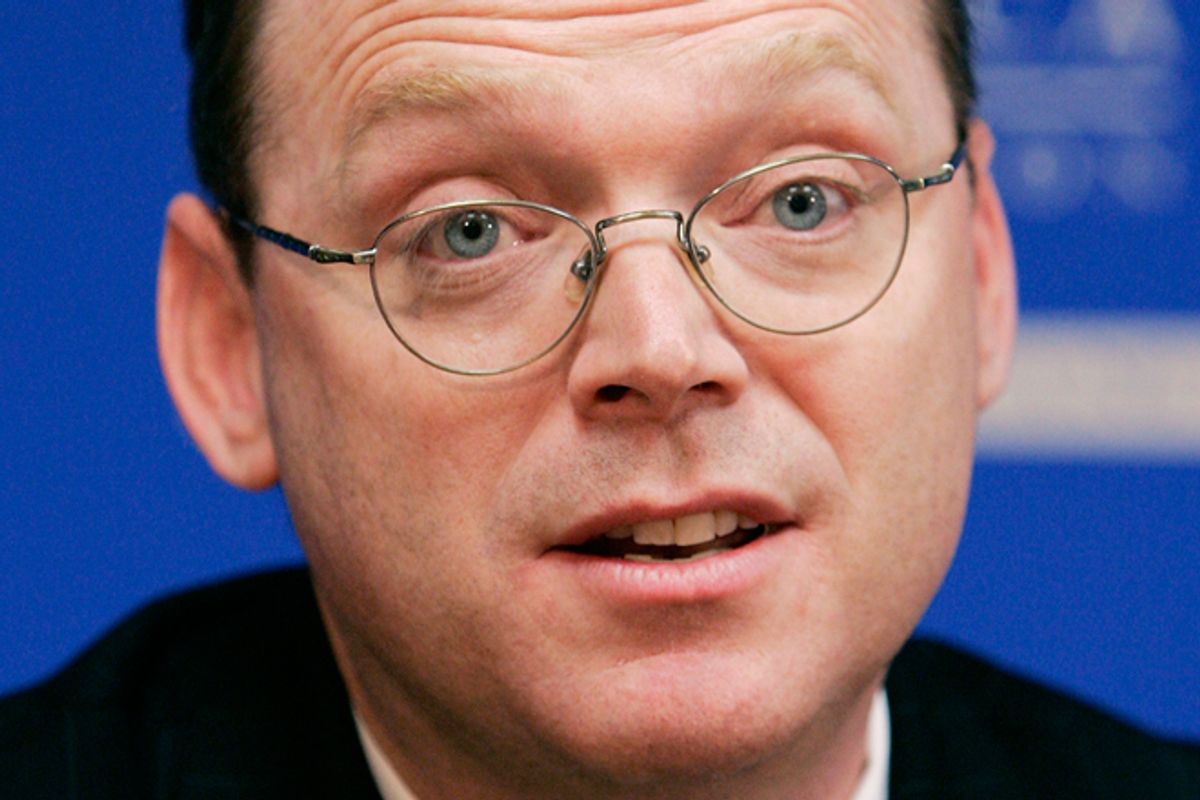 Mitt Romney's economic advisers defended the Republican presidential candidate's tax plans in a conference call last Thursday. That's their job, that's what we expect them to do, no surprise there. Here's the eyebrow-raising part: One of Mitt Romney's economic advisers is Kevin Hassett, a longtime fellow at the conservative think tank the American Enterprise Institute.

Hassett in the spin room is a familiar sight. He was an economic adviser to John McCain in 2000, George W. Bush in 2004, and then McCain again in 2008. One could well argue that his purpose in life is to manipulate reporters on the merits of the economic plans of Republican presidential candidates. After they are elected (or fail to be elected), he returns to his cushy think tank sinecure. He hasn't actually been involved in making economic policy since the Clinton administration, when he served as a "policy consultant" to the Treasury Department.

All that is normal enough for the revolving campaign adviser/think tank fellow crowd. What's astonishing is why any aspirant to the White House would want to be associated with Kevin Hassett. Hassett's track record on economic forecasting is the gold standard for disastrous mediocrity. All by himself, he demolishes any claim Mitt Romney might have to economic acumen.

Hassett's primary claim to fame is as the co-author of 1999's "Dow 36000: The New Strategy for Profiting From the Coming Rise in the Stock Market." Published at the height of the dot-com bubble, "Dow 36000" urged investors not to delay piling into the market -- stock valuations were bound to triple "within three to five years." Hassett's prediction is now regarded as the worst stock market call since economist Irving Fisher declared in September 1929 that “Stock prices have reached what looks like a permanently high plateau." Anyone who followed Hassett's advice ought to be considering a class action suit.

Barring the as yet unlikely prospect of the Dow actually hitting 36000, Hassett and his co-author James Glassman are sure to be ridiculed for their optimism for the rest of their lives, and beyond. But one bad prediction did not sully Hassett's usefulness for those pushing the conservative agenda. By Febuary 2001, with Republicans in control of the White House and Congress, Hassett was testifying before the House Ways and Means Committee, offering the strongest support possible for Bush's tax cut agenda.

Prior even to "Dow 36000" Hassett had co-authored a paper exploring the question of what to do with Clinton's budget surplus making the implied case that the best option was to use it to pay for tax cuts. There wasn't enough to fix Social Security for good, he argued, and Clinton's proposals to invest at least half the surplus in initiatives in "health, education, childcare, transportation, school construction and the environment do not appear to contain meaningful cost-benefit analysis."

Excerpts from Hassett's 2001 testimony make for amusing reading today. President Bush's "relatively cautious" plan would dedicate about half of the surplus to tax relief. But no worries about damaging the fiscal integrity of the U.S. government -- according to Hassett, the surplus was likely to grow even faster than currently predicted, even if a recession came to pass.

If if the President's plan is passed as is, the odds are that next year the CBO on-budget forecast will still be in the neighborhood of [a $2 trillion surplus over the next ten years.] Relative to GDP, even that surplus would be remarkable by historical standards.

And if a recession did happen, the tax cuts would speed our way right out of it back to prosperity: "There is a wealth of evidence that lower marginal tax rates stimulate entrepreneurship and economic activity. ... If the President's plan were passed today, it would be neither too slow nor too meek."

Worst of all, if we didn't get busy spending the surplus, we might spend down the entire national debt by 2008, and then we would be faced with the extraordinary threat of having too much money. We could be sitting on a stockpile of $20 trillion within 20 years, and there would be no good place to put it!

So what happened? The surplus vanished -- Bush was running deficits by 2002. The economic recovery from the 2001 recession turned out to be the slowest -- at that point -- since WWII, rivaling even the post-financial-crisis recession in its mighty meekness. The tax cuts left the U.S. woefully unprepared to pay for two wars and the Great Recession, not to mention Bush's substantial (unpaid for) expansion to the welfare state (the Medicare Part D prescription drug benefit).

Hassett was bloody but unbowed. In February 2008, with the budgetary consequences and economic wreckage of the Bush years clear for everyone to see, Hassett proclaimed in his weekly Bloomberg column that the real problem with Bush was not his tax cuts or his wars, but his spendthrift big government behavior in the realm of the budget referred to as "non defense discretionary spending." (Nearly three-quarters of the U.S. budget is classified as "mandatory" spending, encompassing most of the social welfare safety net: Medicare, Medicaid, Social Security, food stamps, etc.) Bush could have had everything he wanted, if he'd just kept the lid on things like ethanol price supports.

If we had held the line on everything else that is discretionary, we could have had the prescription-drug plan, the Iraq war and the war against terrorists. We could have kept all the Bush tax cuts, made them permanent, repealed the AMT and added the stimulus package and still ended up with a balanced budget from 2008 to 2017.

It makes you sick to think about it. All that money wasted on ethanol and bridges to nowhere has accumulated into a pile that massive. Uncle Sam ate a whopping helping of apple pie every day for seven years, and now he is obese.

I ran this quote by budget analyst Stan Collender, asking him if the math worked, and he deemed the question so ridiculous he could only muster up an "absolutely not!" Yes, Bush did ramp up discretionary spending at an extraordinarily high rate, but even so, if you subtract defense, discretionary spending only accounts for about 15 percent of the annual budget. There's simply no way that you can cut enough from that category to balance the budget and pay for tax cuts, war and Medicare expansion. It's ludicrous to suggest such a thing -- almost as ludicrous as the notion, in 1999, that the Dow Jones Industrial Average was poised to leap to 36,000.

And it's almost as ludicrous as hearing Kevin Hassett tell us, again, how Romney's agenda -- which includes tax cuts bigger than George W. Bush's -- will lead to economic growth and inspire entrepreneurship. He was wrong in 2001, and judging by his track record, he's guaranteed to be wrong now.