As gender transitions become more visible, it's tempting to think all our stories are the same. They're not 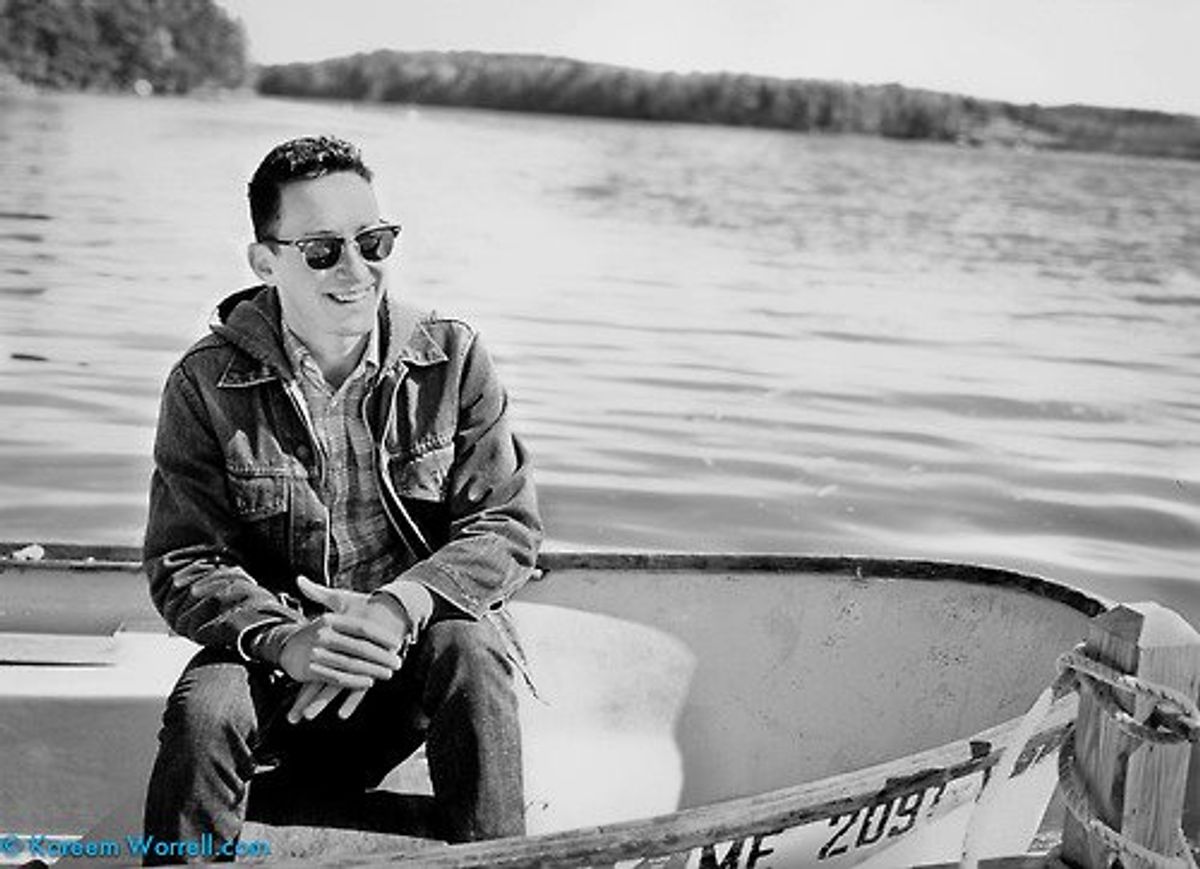 A photo of the author (Kareem Worrell)
--

Just last week I got a birth certificate from North Carolina Vital Records that put a state seal on a tale that began before I could talk. “Thomas Page McBee,” it says, under “Certificate of Live Birth,” and then, there’s the word I spent thousands of dollars, a major surgery, two trips to probate court, two physicals, a doctor’s letter, plus the 80 oily milligrams of testosterone self-shot into my thigh every week to achieve: male.

When I tore open the envelope it took my breath away, much like seeing my reflection every morning — the growing pronouncement of my jaw, the square sideburns, the scruff on my cheek, the pecs and biceps ballooning steadily with each workout — I tear up sometimes, I’m so floored by the rightness of it all. I held my birth certificate, my heart galloping, and I felt born again at the age of 31.

Maybe you think you’ve heard my story before: I knew I wasn’t a girl before I knew much of anything. There were the years of private, simmering mirror-hate; the jealous glances at men, the coveting of facial hair and biceps. As trans people become more visible, our stories have narrowed into a neat narrative arc: born in the wrong body, pushed to the brink of suicide/sanity/society, the agonized decision to begin hormone treatment/surgeries for the reward of ending up ourselves and looking “normal," which ends in a lesson about the tenacity of the human spirit, the gorgeous triumph of believing in yourself.

This is all true. But for me, and many others, it’s also more complicated than that.

I don’t think I was born in the wrong body. I am not “finally myself.” I’ve never spent a day being anyone else. Mine is another story, a real and complex story, and one, by definition, that’s not as easy to tell.

I’ve been thinking about Lana Wachowski since she released a video clip promoting her new film, “Cloud Atlas,” last week. In an age when Chaz Bono yuks it up with David Letterman and the frontman for rock band Against Me! created a frenzy when she came out earlier this year as Laura Jane Grace Gabel, Wachowski surely knew that the video clip would garner attention, requests to be interviewed, before-and-after photos, fans’ gushes of loyalty or turncoat transphobia. Even for those lucky trans folks not facing a daily threat of violence, this is a strange time: one where we find our portrayals hovering between soft-focus empathy and tawdry headlines.

Despite reportedly being several years into her transition, which has been discussed in print and gossiped about openly since the early-2000s, the famously tight-lipped Wachowski has never addressed her gender identity publicly, even when “raising eyebrows” at red-carpet events in pearl earrings and dresses.

So here she is, in this promotional behind-the-scenes video, meant to address the making of her new film. “Hi, I’m Lana,” she says simply, seated beside her directing partner and brother. It’s a blink-and-you-miss-it moment, a wide smile and that’s it. No baby picture montage, no recounting suicide attempts, no bloody footage of surgery.

Hers is not that kind of story.  She goes on to get down to the business at hand. When she describes the new film, her pink dreads shake like flags in the wind.

I hope that’s the sound of a tide turning.

Don’t get me wrong. Some trans people feel that they’ve suffered a birth defect, tantamount to a missing limb. For some folks, “trapped in the wrong body” is a precise description. I don’t fault anyone their language or their vision of themselves. I don’t tell anyone else’s story.

But I do think that the typical trans narrative — the one you see on talk shows or in long human-interest stories in popular magazines — is dumbed down for your consumption because it’s presumed that people who aren’t trans don’t think about their gender identity. Even more darkly, there’s an unspoken assumption: that trans people are strange, untranslatable. There’s something so fundamentally confusing about the trans experience, the logic goes, that we need to make our stories really, really palatable for you to understand us.

But I’ve found the opposite to be true. I write a column for the Rumpus exploring themes related to my transition, and the people who email me or the friends who start conversation over drinks about their own genders are almost always not trans. We talk about the ways expectations of masculinity and femininity inform and stifle us, or how we’ve all grown from teenage bravado informed by those concepts into unique adults, unafraid to be who we are.

Because of that sense of dialogue (inevitable Internet trolls and ignorant menace aside), I’ve come to believe that non-trans folks are not only capable of metabolizing more than the schlocky softball celebrity interviews and stark mirror-in-a-mirror documentary shots, but are hungry for real conversation. Gender is part of everyone’s life, we’re all negotiating the line between what we’re expected to be and who we are.

In that spirit, then, I’ll tell you the whole story.

I believe I was born in the right body; transgender, yes, but there’s nothing “wrong” with me.

For 10 years I was a boyish, short-haired kid, as equally interested in skateboards as poetry. As a teenager, I cultivated a guy-but-better gallantry that won me girlfriends and a few manageable bullies. There were signs that the center wouldn’t hold: the way I felt caught off-guard if my reflection materialized in a window, my insistence on getting a hot shave at the barber, the ace bandage flattening my chest.

Like a lot of people, I understood even at a young age that gender was a spectrum, with “hyper-masculine” and “hyper-feminine” on the extreme poles, and a million shades of potential expression between them. I knew I was masculine, but saw myself as artistic, rebellious, indifferent to alpha posturing. I loved the ruggedness of James Dean and the romanticism of the Beats. For the most part, I felt OK about myself. Anyway, in my baseball hat and jeans, I looked like all the skinny boys I was friends with.

I knew I wasn’t a woman, not like my girlfriends or sister or mother. Not like my friends, even the tomboy punk-rock straight girls or the swaggering butch lesbians. But I looked at most of the men in my midst and didn’t see myself in their jockeying power dynamics or aversion to hugs. Even later, as I befriended guys just as baffled by masculinity as I was, I didn’t connect my growing discomfort in my body to the reality of their physical differences. I didn’t feel like a man exactly, and I figured, once I knew trans men in college, that hormones weren’t for me. It was easier to imagine dressing like the fantasy guy I saw in countless mirrors than it was to imagine an actual life of men’s rooms and shoulder claps.

It was my breasts that troubled me the most: they were lost pilgrims, afloat on my frustrated body. My attempts to hide them grew more elaborate by the day, and my frustration with their shape made getting dressed an angry hurricane of discarded, too-tight T-shirts.

By the time I’d moved to Oakland in my early 20s, I’d decided I would have chest-reconstruction surgery as soon as I could save up enough money to do so. Maybe, I figured, that would fix the growing reality that I no longer “passed” as a teenage boy, that every “ma’am” thrown my way tarnished my sparkle. So, one foggy June morning in 2008, a surgeon sculpted pecs where there once were breasts. I lost, in the process, five pounds of flesh; I awoke feeling a much heavier burden lifted.

But something was wrong. I thought maybe I could find peace by lifting weights, jumping rope to keep trim and hide my hips, wearing V-necks that showed off my flat chest. I went swimming shirtless in the Caribbean, trying to occupy some unicorn space. I tried, with growing desperation, to both love my body and be myself. I even wrote about it for Salon: I’m not a man or a woman, I said.

But pronouns made me bristle, and I didn’t understand yet that I could look like a man and be whomever I wanted on that grand spectrum. I didn’t think that, just like you, I have a gender identity that’s growing and evolving, that I’m tasked with finding my authentic place in a jumble of stereotypes and expectations. What makes a man? I thought, looking at myself.

It was my body that showed me. They call it dysphoria, but it feels to me like watching yourself become a stranger. Maybe you’ve known you’re making a mistake: a bad marriage, the wrong career path, something that becomes clearer and more potent daily. My reflection seemed to be going in the wrong direction: rounding where it shouldn’t have been, thinning where it should have thickened.

Every trans person has a breaking point, and mine came two years after top surgery, when I expected to see myself and found a woman standing before me, instead. As much as I didn’t connect with the cultural expectations of Being a Man, I knew that I’d grown up and become one. I was going to have to figure out how to bridge the gap.

I’d done so many sit-ups and spent so much time in quiet reflection, tailoring shirts to fit my bird chest that I knew, in that last-puzzle-piece way of an epiphany, that loving myself meant allowing my body to change. I had a primal sense of home, and I knew exactly what it looked like. My body needed me.

Here we are, over a year later. I love the way my face has blended into something familiar, how I’ve met the guy I saw every time I squinted at the mirror. I am indeed the male-bodied version of myself, the same romantic, tattooed guy.  I wish I could explain to the 23-year-old looking in the mirror that I needn’t have worried: my body knew. My gender hasn’t changed since I was a teenager.

I’m very much my own man.

I don’t know how Lana Wachowski feels, but I hope that the relative quiet of both her “introduction” and the reaction to it signal a growing awareness that we’re entitled to our stories, however we want to tell them. Maybe we don’t need to hand out sugar pills anymore.

“I’m Lana,” she said, and smiled. It was an act of faith to leave it there, in two words and a shake of that hair. Consider the story told.

Thomas Page McBee pens a guest column on the Rumpus, Self-Made Man, and his nonfiction has been featured recently in the New York Times, among others. To learn more about his memoir-in-progress and to reach him directly, visit thomaspagemcbee.com.