The U.S. women get "outscampered" by Canada, but survive to earn another shot at the Japanese 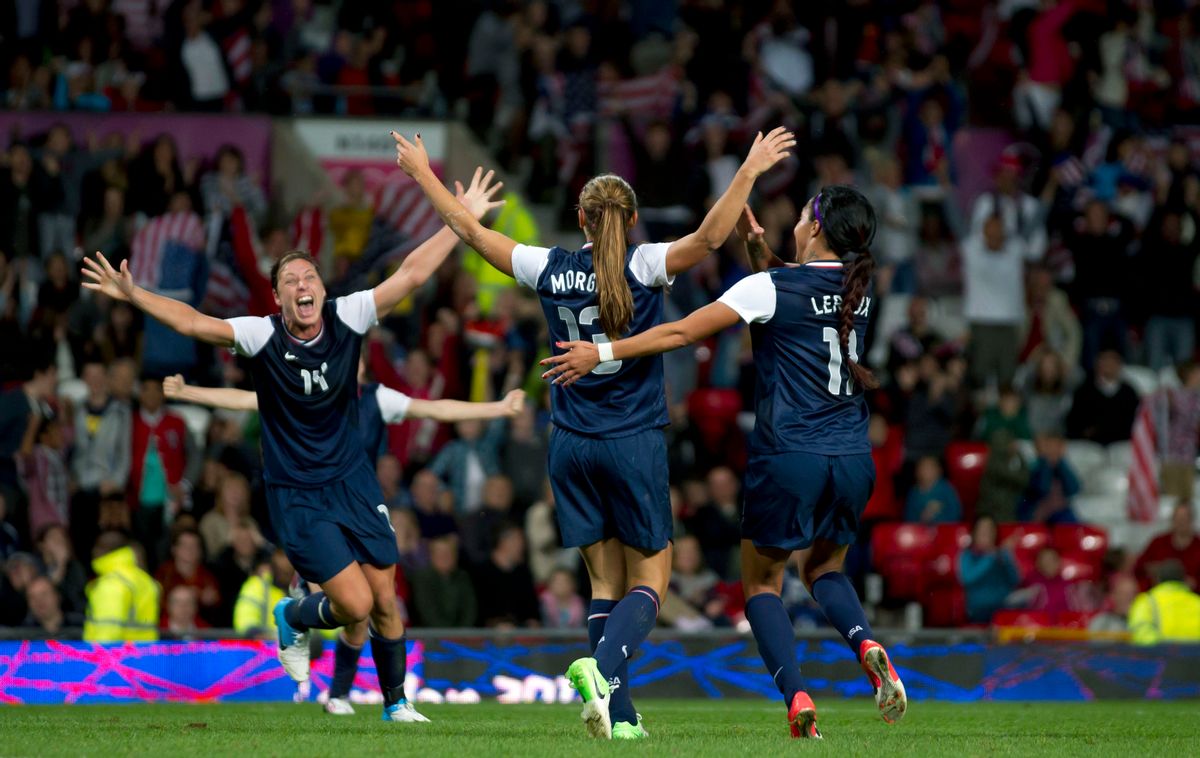 The big Olympics story today, at least for Americans, was supposed to be gymnastics. But Gabby Douglas didn’t win, and the U.S. women’s soccer team almost didn’t win either, and that makes them the bigger story.

If Andy Murray’s victory over Roger Federer Sunday is a story of redemption, just think about what it’s going to be like on Thursday when the U.S women's soccer team gets a rematch against Japan with a gold medal on the line.

There are those who would argue Team USA’s World Cup loss last summer to the Japanese far outweighs whatever happens in London this week; after all, they say, soccer really doesn’t even belong in the Olympics. To this I would reply: They were saying the same thing about tennis a short time ago. So now ask Andy Murray if the gold medal means as much to him as whatever they give the winner at Wimbledon.

Thursday's anticipated match, though, came very close to not happening. On Monday, the American women ran into a buzzsaw named Christine Sinclair, the star of the Canadian women’s national team, who gave the day its most unexpected thrill.

Unexpected, that is, because the U.S women have not lost to Canada since 2001 and were 22-0-4 in their last 26 meetings before Monday. But the feisty team came within a wisp of pulling off one of the biggest upsets in women’s soccer this decade, and maybe this century.

Out-hustling and even out-muscling our girls, they led 1-0 at the half and ran off the field as if a table full of Tim Horton's awaited them in the locker room. I couldn’t quite put my finger on what was wrong with the U.S., but British soccer commentator Arlo White pinned it down: “The Canadians are simply out-scampering the Americans!” Yes, that was it. We were being out-scampered.

Also, I think Canadian coach John Herdman energized his team with a shrewd psychological ploy when he accused the U.S. women of “dirty” soccer; actually the term Herdman used was “highly illegal” blocking tactics. The result was that the Americans seemed to be holding back from physical contact, especially on those corner kicks near Canada’s goal.

Before the second half, Brandi Chastain, who was doing the commentary with White, noted that the American team needed to get back to being “possession-oriented,” and they did, with possessions that would have impressed Linda Blair, scoring three second-half goals.

The problem was that Canada did a little possessing, too. You may recall last week that Chastain made some mild criticism of Team USA’s defense, which drove U.S. goalie Hope Solo to a Twitter temper fit. Brandi, she implied, didn’t understand that the game had changed. Changed to what, exactly? In the second half, the raggedness of the U.S. defense made Chastain’s criticisms seem prescient; the Canadians took so many shots on goal that Solo seemed without hope.

The Americans needed someone to step up, and several did. Co-captain Abby Wambach gave the team a pep talk, challenging her teammates to find one moment of brilliance. Alex Morgan took her up on it, looping in a six-yard header in the third and final minute of injury time, securing a 4-3 win and setting up the big one with the Japanese on Thursday. (Japan’s 2-0 victory over France earlier in the day was much closer than the score indicated.)

I’d like to give my own pep talk to our women: Tell Hope Solo to just shut up and play.

Yesterday I quoted a proud British fan who told an NBC reporter at the Olympics, “You know, if you consider the number of our medals compared to our population, we are No. 1 per capita!”

However, Steven Lubet, a law professor at Northwestern University and author of, among other books, "Fugitive Justice: Runaways, Rescuers and Slavery on Trial," tells me the British fan is only correct if he’s talking about the top three medal-winning countries – China, the U.S. and Great Britain. “With 40 medals and 62 million people, the U.K. per capita is roughly one medal per 1,550,000. Pretty good, but not as good as Australia’s 21 medals with 22 million people or one per every 1.04 million Aussies. Cyprus is even better, with a single medal for its 838,000 citizens (on the competing Greek side of the island).

“Jamaica beats them all, with four medals and 3 million people, or one for every 750K – better than twice the rate for Mother England. But now that Kirani James won the 400-m for the first gold medal ever for Grenada, the island country, with 110,000 citizens,  is the new medal-per-capita winner.”

As a consolation to our British friends, Lubet offers: “All the more medal-heavy countries were once part of the British Empire.”