How do we identify the next Wade Page before he murders people who aren't white? It won't be easy 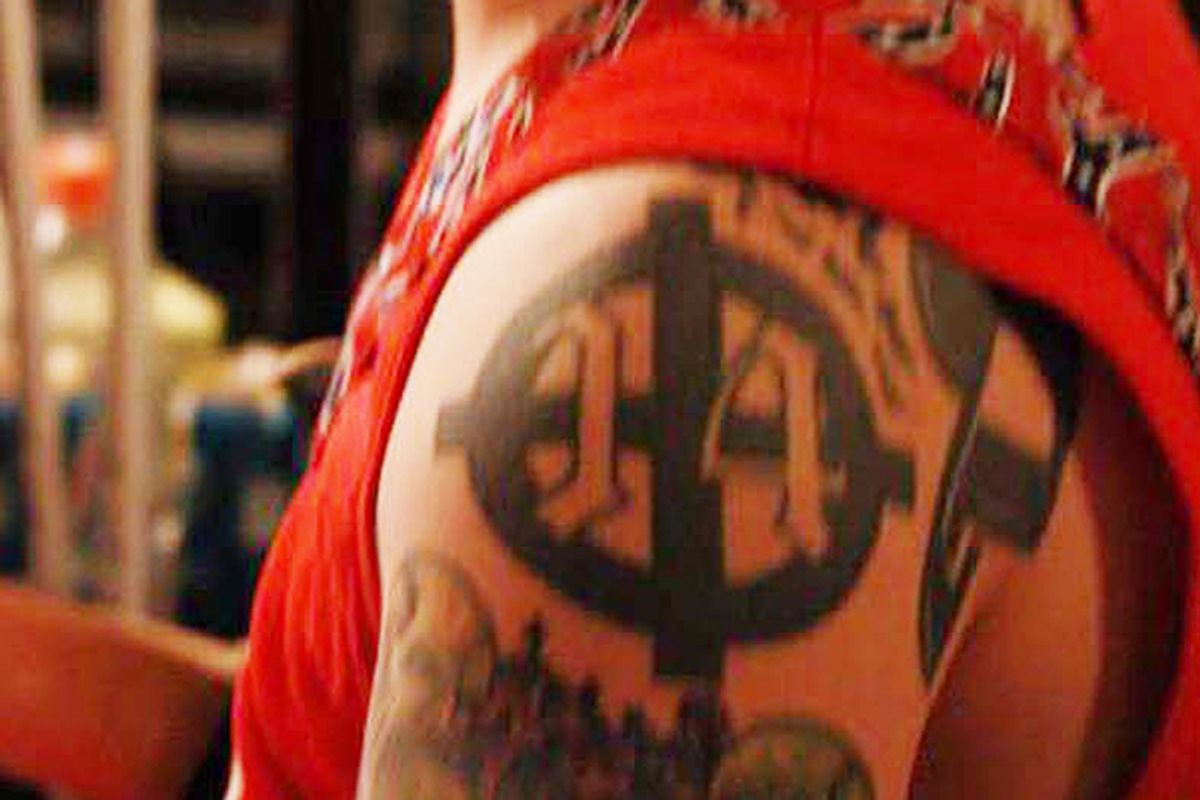 My favorite necklace when I was a child was a tiny, intricate Celtic cross. My godfather gave it to me the day of my christening. I wore it as often as my mother would let me, all through childhood. The thin gold chain got too small for me right around the time I was outgrowing public displays of Catholicism. I never consciously decided not to wear it anymore; it seemed as though I shed it by design, like baby teeth.

Imagine my surprise a few years ago, when I first started researching my book, and I found the Celtic cross as the very first image in the ADL's online database of "general racist symbols." The text responsibly notes that the cross "is used widely today in many mainstream and cultural contexts. No one should assume that a Celtic Cross, divorced from other trappings of extremism, automatically denotes use as a hate symbol."

Now it turns out Wade Michael Page, who murdered six and wounded three at the Sikh gurdwara in Oak Creek, Wis., wore a type of Celtic cross tattoo customized by white supremacists: It features the standard cross surrounded by a circle, with the number 14 at the center, standing for the 14-word white-power slogan, "We must secure the existence of our people and a future for White Children."

Many stories about Page's tattoo note that Don Black's white nationalist hate site, Stormfront, uses a stripped-down version of the cross as its logo, surrounded by the words "White Pride World Wide." Black is a former grand wizard of the Ku Klux Klan, and given that Irish Catholics were a key target of the Klan, along with African-Americans and Jews, it's extra-galling that douchebag supremacists would appropriate that particular symbol.

Most people will know not to assume a Celtic cross makes a person a white supremacist nutjob. But are there other ways to spot right-wing haters who are likely to turn to violence? I'm just not sure. Rinku Sen's thoughtful piece "Angry White Men" argued against treating acts like Page's as senseless, random violence, since "they are neither senseless nor random, and the vast majority of such incidents here involve white men." She's right: Ignoring the twisted "logic" of racism as a prime motivator for white supremacist violence is a form of denial. Some of our white brothers are going around the bend over the country's accelerating diversity, and a few of them are armed and dangerous. When Sen asserts that "the link between violence, masculinity and whiteness is well-established," I think she goes too far. Violence doesn't always, or only, go along with white masculinity. So where does reasonable social caution and concern end, and racial profiling begin?

Clearly, we have to be able to talk about the rising tide of right-wing, racist organizing. The ginned-up controversy over the Department of Homeland Security's 2009 report on the rise of hate groups looks particularly stupid now, given that Page seems straight out of the pages of the report.  "Rightwing Extremism" predicted that a troubled economy plus the election of a black president could inspire a rise in racist hate groups and actions.  The report was particularly concerned with "lone wolves." As Jonathan Capehart has already noted, it found that “lone wolves ... embracing violent right-wing extremist ideology are the most dangerous domestic terrorism threat in the United States.”

It went on to say that “white supremacist lone wolves pose the most significant domestic terrorist threat because of their low profile and autonomy — separate from any formalized group — which hampers warning efforts.” The report also noted that military experience could make such lone wolves particularly dangerous. Page was a veteran (I'm not implying veterans are violence prone). Wells Fargo foreclosed on his North Carolina home in January. His girlfriend reportedly dumped him in June. He was a lone wolf who lost his home and was already deep into white supremacist insanity. We don't know when, or why, he moved to violence. But "Rightwing Extremism" seems prescient now.

Instead of being hailed, or simply ignored (as government reports tend to be), it inspired a clamorous right-wing backlash against even the possibility that extremist right-wing rhetoric married to ideas of racial superiority might result in violence. Matt Drudge, who regularly trumpets supposedly under-covered stories about crime by African-Americans (particularly stories that feature white victims), was one of the loudest voices of opposition to the release of the DHS report, which had been commissioned by George W. Bush. One Drudge banner headline shrieked "SHE IS WATCHING YOU," she being Homeland Security Secretary Janet Napolitano. So racial profiling and stereotyping is fine when it comes to crime by African-Americans, but not by whites. We're used to that kind of double standard from Drudge, whose site some days resembles Stormfront in its hysterical hyping of black-on-white crime.

Some conservatives even object to the Southern Poverty Law Center characterizing Page, along with his racist musical colleagues, as white supremacists. Silly contrarian Ann Althouse objected to the SPLC terming the bands Page has belonged to "racist white power" bands, adding, "I'm not sure how they know that." Oh, I don't know, Ann, maybe because an album cover of one of Page's bands, Definite Hate, featured an illustration of a white arm punching a black man's face? Reuters found a YouTube video for Definite Hate that referred to lyrics including: "Wake Up, White man, For Your Race, And your land," and "Wake Up People Or Your (sic) Gonna Die!" Page himself talked about going to Georgia's white-power music festival Hammerfest. Is that evidence enough for you? Althouse and her dittohead commenters accused the SPLC of stigmatizing and demonizing "punk rock" generally, which of course they absolutely didn't do.

I have no problem with the SPLC tracking white power bands. I was appalled when Napolitano withdrew the "Rightwing Extremism" report after the faux-controversy. Al-Qaida expert Peter Bergen notes that there have been twice as many right-wing terror attacks as Muslim terror attacks in the U.S. since 9/11, and suggests the government isn't taking it as seriously. I don't believe in racial profiling, of any group, but I think we should take the terror potential in right-wing extremist organizing as seriously as we take the potential in any violence-committed group. (Although at the end of an otherwise insightful piece, Bergen warns about "left wing extremist groups," even though he fails to give any examples of them.)

I'm not sure exactly how we prevent future violence, though. Rinku Sen rightly observes that some combination of tougher gun control and more widely available psychological help would make a difference. She also urges white people to be more proactive about confronting the racists in our midst. "I implore of my white friends, when your nutty uncle or classmate goes off about some set of foreigners, you must make a fuss, cause a family crisis, become unpopular, speak up. We cannot do this for you." I'm fine with that: I've ruined my share of parties and holidays by calling out someone's racist jokes or comments, and I'll continue to.

But beyond that? We're living through a time of enormous transition, and racial change is only one example. Still, it can make all the other change tougher to navigate, until we develop better ways of talking about difference and a bigger, more inclusive picture of a multiracial America. It's a human impulse, to find enemies. It's also a human impulse to look for allies. How do we fight the tendency, too common among white people but not exclusive to them, to pick enemies and allies according to skin color?  We also have to think about why our society seems to be creating more lone wolves, most of them men, often but not exclusively white (think Virginia Tech's Seung-Hui Cho).

It's hard not to notice that the Sikh temple killings didn't generate the kind of media coverage, or the political response, that the Aurora theater shootings did. The Joplin, Mo., mosque torched the next day got less attention still. It's not terribly reassuring that in Mitt Romney's Tuesday comments on the Oak Creek tragedy, he repeatedly referred to the "sheik" -- not Sikh -- community. But that's nothing compared to the jihad by Republicans like Rep. Michele Bachmann and Louis Gohmert to demonize Muslim Americans. There's something ugly afoot in the country right now, that makes it easier to cast difference as dangerous. But mainly it's dangerous for the people who are "different," far more than for white people. This isn't the America I was raised to revere.

We should also remember that one of the heroes of the Oak Creek attack is officer Brian Murphy, who was shot by Page eight or nine times but who discouraged medical attention so paramedics could save wounded worshipers. There is no word as to whether Murphy, who is presumably Irish Catholic, with family in the New York Police Department, has ever worn a Celtic cross.