No one cries for Lolo Jones 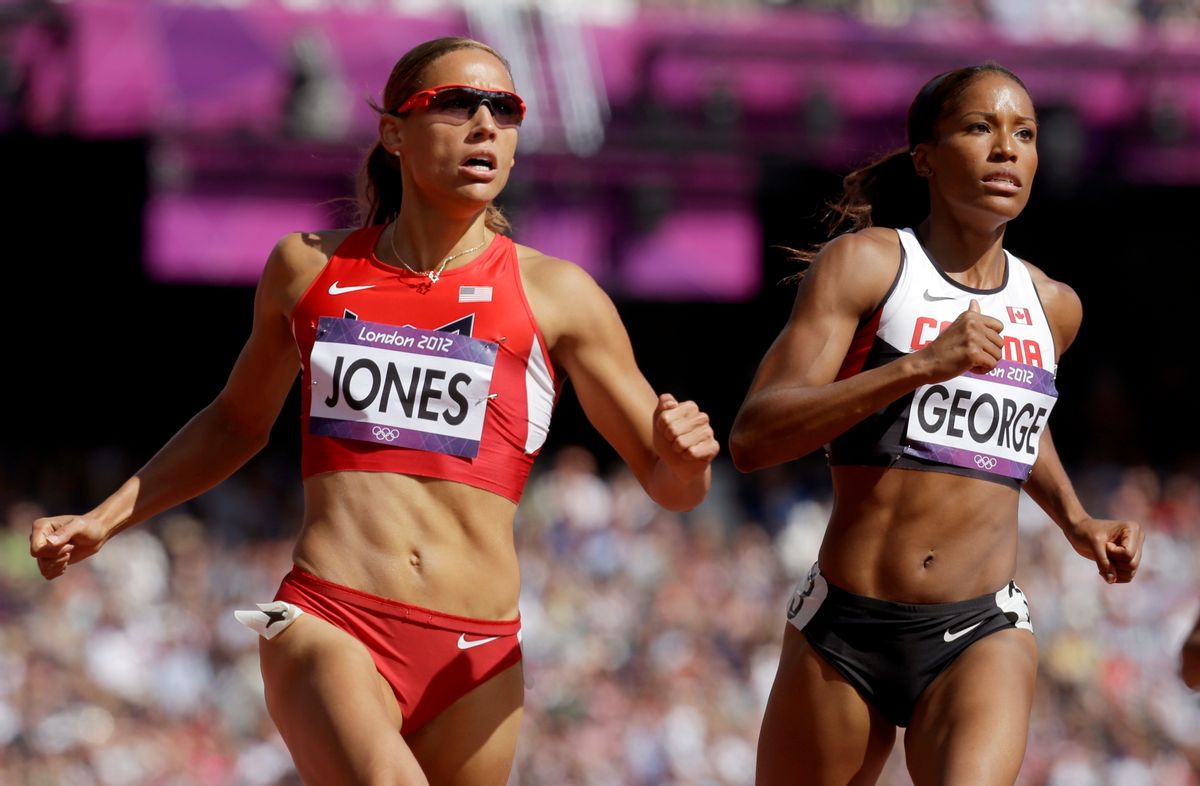 Jim McKay used to say that every day at the Olympics gave you something to cheer and to cry about. I don’t know if Lolo Jones cried last night after failing to win a medal in the 100m hurdles, and I’m fairly certain that none of her U.S. teammates cried for her, but there’s something about her whole story that is very sad.

You’ll remember that she lost in Beijing when she hit the next-to-last hurdle – and how weird, the next-to-last, not the last when you expect your energy to give out – and just missed out on the gold.

It’s fairly safe to say that of all the American athletes who had yet to win a gold medal, Lolo is the most hyped, making the cover of Time, a spread in Rolling Stone, a semi-nude shot in ESPN magazine, a guest spot on Jay Leno. In fact, she probably received more press than all other U.S. athletes except our swimmers, Michael Phelps and Ryan Lochte.

Yesterday, in perhaps the most publicized track competition of the day, Jones, who at 30 is probably past her athletic prime, finished in fourth place at 12.58, 0.23 seconds behind Australian gold medal winner Sally Pearson and 0.21 behind American silver winner Dawn Harper. It was a poor performance, I guess, but only by the standards of Olympic front runners. A quarter of a second faster and you’d probably see Lolo on the cover of Sports Illustrated this week and Playboy next month.

I say this because I think it’s a shame that Lolo couldn’t shave off that quarter of a second – not because I have anything against the winners, but because I thought Jones is perhaps the most refreshing American athlete in London this year for precisely the reasons most of her teammates seem to find her obnoxious. Yes, she was – I’m already speaking about her in the past tense – a terrific self-promoter, instinctively understanding that she was the athlete the media most wanted to promote. Coming from a hardscrabble background, she offered none of the pious platitudes as to why she ran – she had talent, she had looks, and by God she intended to use both to make a good life for herself.

Judging from the Tweets and anonymous quotes about her that have flooded social media, a great many  have been offended by her blatant self-promotion and lack of modesty, though I suspect jealousy was just as much of a motive.

I hadn’t thought much about Dawn Harper at all until today, after winning her silver medal, she commented "I feel like I kind of shut some people up. You've got to talk about Dawn a little bit. Sprinkle me in that conversation of the 100 hurdles." But all you did, Dawn, was tell me how envious you are of Lolo Jones, which makes you – at least in my eyes – a great deal less interesting.

In her gold-medal winning floor exercise routine, Aly Raisman’s awe-inspiring tumbling passes – to my naked eye, it looked as if she could have cleared the U.S. men’s basketball team standing shoulder-to-shoulder – came right after her unexpected bronze on the beam. Considering that the latter was not expected to be her event, I’d call these the two best performances by any American athlete in this year’s games.

“Little Miss Consistency?” Like hell.  This 18-year-old put an unexpected charge into the event that takes some of the sting out of our memory of the Fab Five’s disappointments. Also, according to my crack research team, this is the first time ever a medal has been won to the tune of “Hava Nagila.”

What I’m really curious about -- and which the commentators for yesterday afternoon’s medal event never addressed -- was whether synchronized swimming was a sport before it became an Olympic event, or if  someone on the IOC created it out of thin air. All I’m sure of is that of all the Olympic competitions, there are more clichés in a synchronized swimming event than any other 10 events combined. When the Spanish team was performing, one commentators gushed, “I know it’s a cliché, but they make it seem so easy.”  I assume he was right; I don’t know enough to distinguish easy-looking synchronized swimming from the difficult kind.

The Chinese team was next, and the comment was “The Chinese are not as artistic as Spain, but they are powerhouses.” Yeah, that’s what I thought, too. (The Chinese took bronze, the Spanish took silver, and the Russians, who must have been both artistic and powerhouses, won the gold.)

One thing I am qualified to comment on: The Russians were underwater more than the other teams by a good six seconds. So maybe they got points for holding their breath?

You’re 16 years old. You just won two Olympic gold medals for your country. You’re the first African-American gymnast to win gold in a women’s gymnastics all-around event and the first black female in Olympic history to become the individual all-around champion. And when people talk about you they want to split hairs.

After 10 years of training that entailed leaving home when she was 14 to train with a coach in another state, Gabby will become America’s next Olympic sweetheart and the endorsement queen of the 2012 Olympics. But incredibly, the No. 1 subject of tweets about her concern her hair – or rather, criticism of her hair.

Although Gabby wears her hair as most gymnasts do, pulled back in a ponytail or bun, swarms of tweeters have complained about her looks. Typical Tweet: “Her do looks unkempt.” Another asked “Who gave her that silly half wig and silky ponytail?” Is this because so many people are watching women’s gymnastics for the first time -- or because for the first time they are seeing an African-American gymnast?