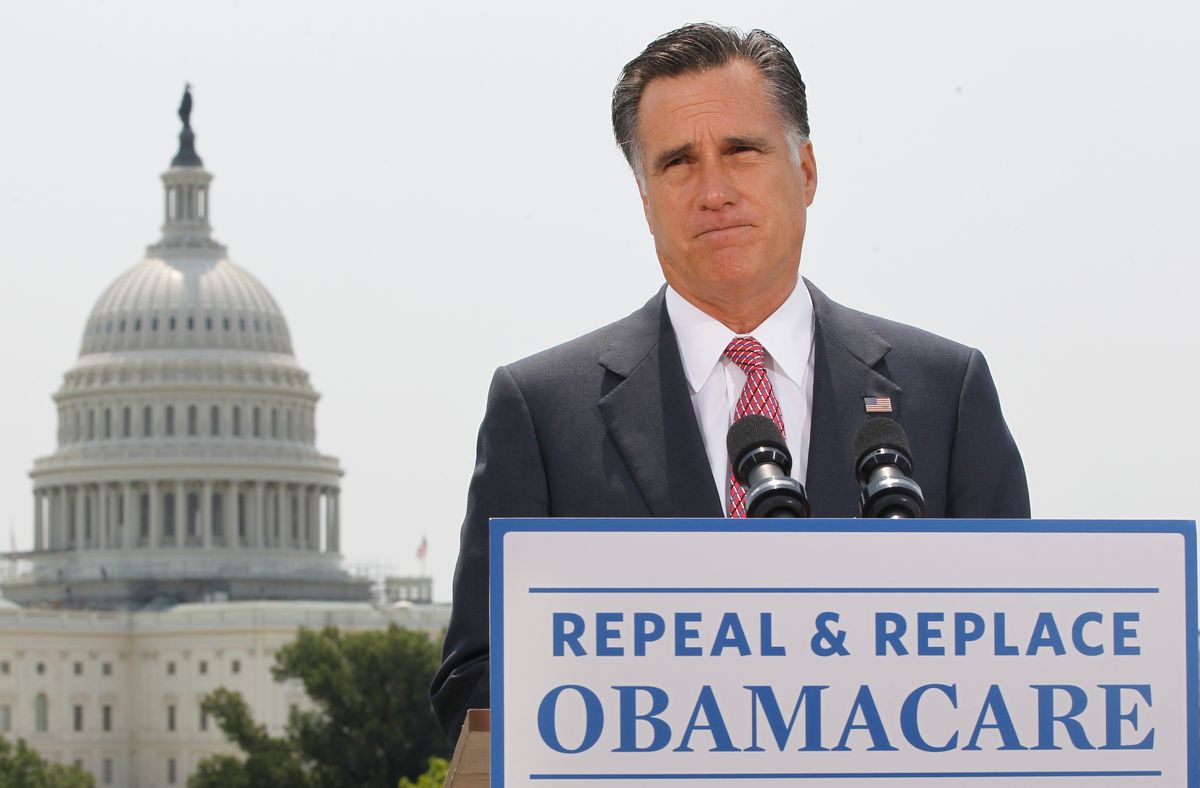 Mitt Romney’s campaign press secretary, Andrea Saul, has kicked up a bit of a storm with her response to a new ad from a pro-Obama super PAC.

The spot, which was unveiled Wednesday, features a man who lost his job when Bain Capital shuttered the Kansas City steel plant he worked at in 2001.  “When Mitt Romney and Bain closed the plant,” he says in the ad, “I lost my health care and my family lost their health care. And a short time after that my wife became ill.” Some vital context is missing, and the Romney campaign is on solid ground in crying foul.

But when Saul appeared on Fox News on Wednesday, she went much further than that, telling host Bill Hemmer that if the man and his wife “had been in Massachusetts, under Governor Romney’s health care plan, they would have had health care.”
It took a while for Saul’s comment to go viral, but by this morning several conservatives were voicing their displeasure, including Red State’s Erick Erickson, who quickly penned a post titled, “The Moment All the Doubts About Romney Resurfaced on the Right.” There was also the Washington Examiner’s Phillip Klein, who added this: “Not sure if the Romney camp realizes what a huge opening they've just created for Ds on Obamacare.”

There are two ways of looking at this mini-freak-out on the right. One is that it’s primarily about ensuring that Romney remains on the ideological reservation. Conservatives detest “Obamacare,” and since Romney’s Massachusetts law is basically the blueprint for it, you can understand why a conservative would be instinctively alarmed to hear his campaign talking this way.

But I doubt there’s much for the right to worry about. Recall that Romney pointedly refused to repudiate the Massachusetts law while running in the GOP primaries. And in the rare instances when he was pressed on it in debates, he was fond of citing its broad popularity with the state’s voters. What Saul said, then, really isn’t at odds with what Romney has been saying about healthcare.

Where things get tricky is the fake distinction Romney has made between his state law and Obama’s federal law. This was how he got through the GOP primaries, railing against the freedom-killing evils of Obamacare while claiming that his own law is different in vital, substantive ways. It all amounted to gobbledygook, but it meshed with where most Republicans really are on healthcare: They hate Obamacare, but don’t really know or care much about what’s actually in the law. (And, in fact, when you ask them about specific components, they often end up saying they like them.)

So the question is whether Saul’s comment is a hint that Romney might be breaking away from his own base, or just a clumsy attempt to keep playing the same game on healthcare – that is, to continue pretending there’s a huge difference between RomneyCare and Obamacare.

This is why suggestions that some secret inner-moderate will emerge if Romney claims the White House are hard to believe; when it comes to making policy, he’d be as beholden to the GOP base as he’s been as a candidate. So there’s just no reason for conservatives to fret that this is the start of some major Romney transformation.

The other way of looking at the uproar is that it’s more about November, as Klein’s tweet seems to suggest. The idea here is that conservatives understand the flimsiness and outright absurdity of the RomneyCare/Obamacare distinctions that Romney is peddling and that they’d rather not have the subject come up at all. After all, Romney faced such amateurish competition during the primaries that he was never really forced to grapple publicly with his law’s similarities to Obama’s. That will be much different in the fall, though, especially in a debate with Obama.

Think back to 2004, when the strongest Republican rebuttal to John Kerry’s criticisms of the Iraq war amounted to: Well, why did you vote for it then? Similarly, Obama is positioned to respond to any Romney attacks on Obamacare by turning to him and saying: Where do you think I got the idea from? It may be fear of a moment like that that’s motivating some of the reactions from conservatives today.