As the U.S. beach volleyball stars three-peat, American women also have a big night in track and field 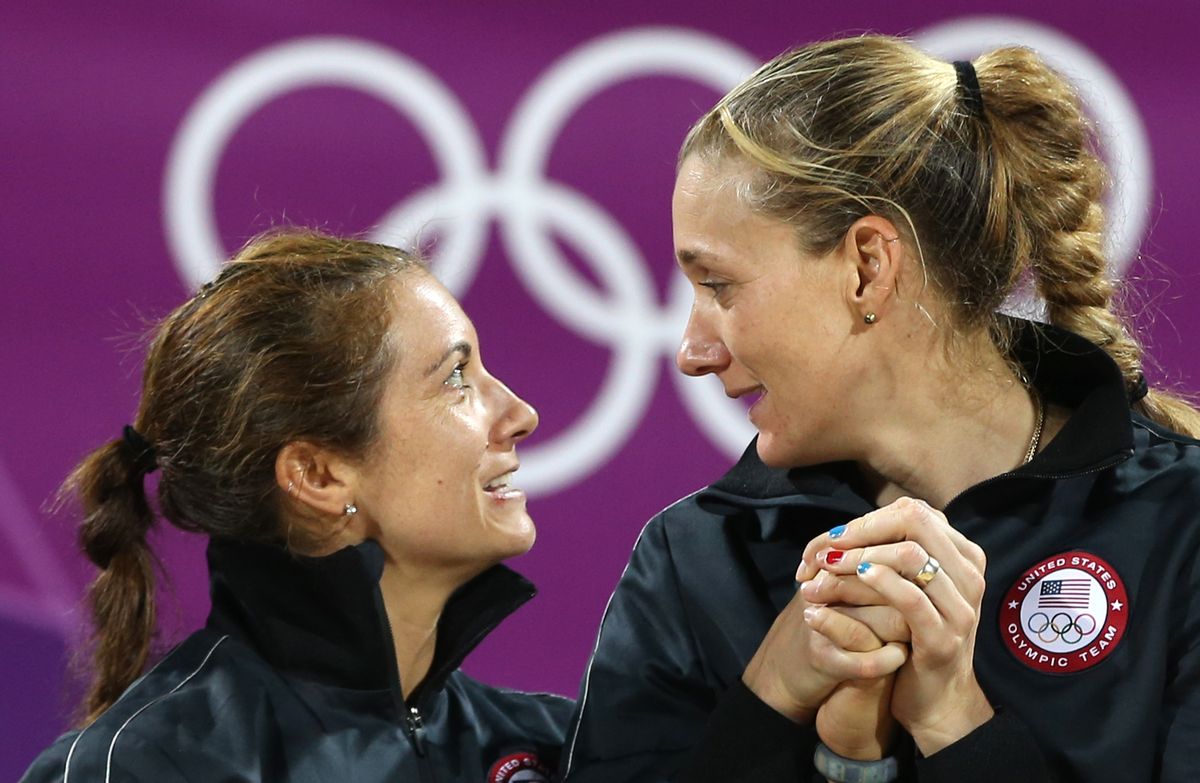 If it hasn’t been obvious already, yesterday proved that for America, the 2012 Olympics have marked the triumph of our women. Over at the Horse Guards Parade, the incredible Misty May-Treanor and Kerri Walsh won the gold for beach volleyball for the unprecedented third consecutive Olympics. And the team they beat, fellow Americans Jennifer Kessy and April Ross, took the silver and almost certainly launched their campaign for the 2016 gold in Rio. Meanwhile, at Olympic Stadium, Allyson Felix took the gold in the 200m while teammate Carmelita Jeter won the bronze. (Jeter had previously won a silver in the 100m.)

On the wings of these victories, the American medal count surpassed China, 81-77, and most U.S. medals have been won by female track and field stars. Of the 34 American track medals, 23 have been won by women.

I don’t know how to measure the difficulty of any competition except by the number of champions in the field. Yesterday’s 200m (which Felix ran in 21.88 seconds) was run by a field of winners. She finished an eyelash ahead of Jamaica’s Shelly-Ann Fraser-Pryce; four nights earlier, Fraser-Pryce had won the 100m.

But the race wasn’t that close: About two-thirds of the way through, Felix put on a startling burst of energy and left the entire talented field, including Jamaica’s Veronica Campbell-Brown, in her trail.

One thing I like about the Olympics is the way that nearly every tale of triumph is balanced out by something bittersweet. Just about the only honor Felix had been denied in the Olympics was the 200m gold. In Athens eight years ago she lost to Campbell-Brown, and in Beijing four years later, lost to her again. Nothing, I’m sure, could have been more satisfying for Felix than to finally win this race and to put Campbell-Brown, literally, behind her.

But watching Campbell-Brown with her hands on her hips and her head down after the race, I was reminded  what this had meant to her: She was on the verge of becoming the first woman to win the same track and field event in three consecutive Olympics, and all she had to do to accomplish that was beat the woman she had defeated in the Olympics twice before. Yesterday, though, she wasn’t close to even the bronze. At 30 years old, and in the prime of life for almost any other occupation, she had suddenly become old by Olympics standards.

You can’t follow everything in the Olympics, so I skipped race walking, taekwondo and maybe a couple of other events, and very nearly missed out on one of the most interesting stories of London 2012.

I left the room to grab a 5-Hour energy drink – I need three just to get through one afternoon – and came back to see a woman wearing a long-sleeved shirt, leggings and a white head covering walking off the track in Olympic Stadium. Her neon green running shoes were the only things she wore that looked like typical runners’ attire. Her radiant smiling face peered out from under her head covering as she trudged across the finish line of the 800-meter heat. Well, she wasn’t actually trudging, but she was clearly last.

At first I thought she was making some kind of  political or religious statement. As it turned out, she sort of was.

Sarah Attar, 19, had just become Saudi Arabia’s first female track Olympian. Attar has dual citizenship in the U.S. – her mother is from California – and in her father’s native Saudi Arabia. She runs track at Pepperdine University in Los Angeles. (She does not appear to have worn the head scarf at Pepperdine; before the Olympics, her family reportedly asked the university to remove photos of her training in a tank-top, shorts and no scarf from the school's website.)

Attar, surely the only last-place finisher to be interviewed by NBC, told a reporter, in only a brief statement, “It is an historic moment. I hope it will make a difference. It is a huge step forward. It’s a really incredible experience.”

The IOC told Saudi Arabia that if it did not allow women to compete, the country's men would also not be allowed in the games. The kingdom responded by saying women could compete if they wore the head scarf; the IOC agreed. Why, I wonder, did Attar agree? She barely spoke to the press. But whatever her purpose or reasons, there was something so noble about this woman that I found myself touched in a way that I wasn’t even by the great moments of Michael Phelps and Jessica Ennis.  Did anyone else in the entire Olympics better represent the spirit that we all want to believe the Olympics are about?

The Western world may little note nor long remember Sarah Attar’s run and last-place finish, but if young Arab women were watching her example, she may end up inspiring more people than all the gold medal winners combined.

You wonder about all these great athletes and what their lives are going to be like after the Olympics. I’m happy to see that 100m champion Usian Bolt has announced he would like to play soccer for Manchester United. A spokesman for the team told The Sun, “As the fastest man on earth, he would undoubtedly add speed to the team.” With that remark, the Man U spokesman set a new Olympic record for understatement.