For the third time, Romney thinks he can get away with misrepresenting experts. Is the press, gasp, on to him? 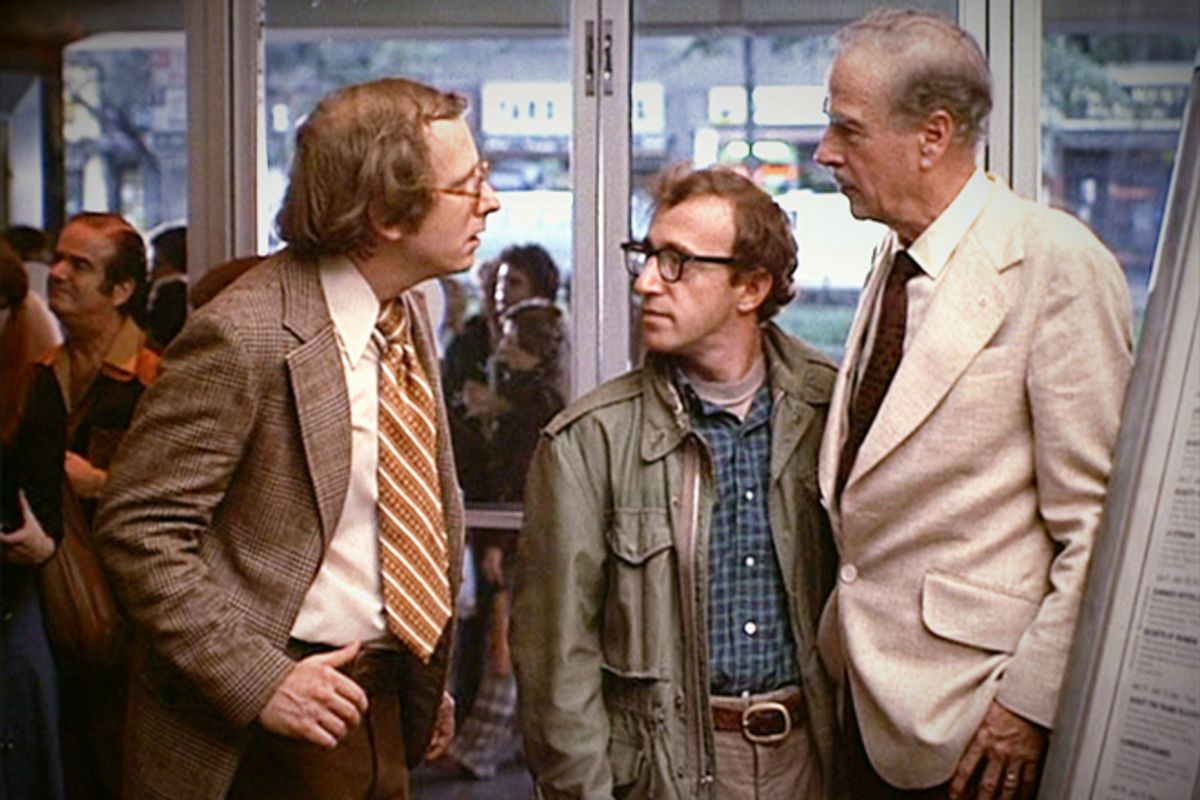 [UPDATED] If you're not already sick of the "Annie Hall" references popping up in campaign punditry, give it time.

I refer to the famous scene where Alvy Singer, sick of listening to a pretentious man's sophomoric thoughts on media theorist Marshall McLuhan, summons the real McLuhan through the magic of film to tell the man, "you know nothing of my work." The scene is now shorthand for a situation where an expert is called in to dispute someone's characterization of said expert's work, and journalists have been doing that a lot, lately, to Mitt Romney. It's hit the "three makes a trend" mark.

It happened first when Romney delivered a speech praising Israeli "culture" -- and denigrating Palestinian "culture" by comparison -- in which he invoked Jared Diamond's "Guns, Germs and Steel." Diamond then wrote a New York Times column in which he patiently explained what Romney got wrong about his book, adding, "I have to doubt whether Mr. Romney read it." That's as good as a McLuhan moment gets, basically.

This week, Romney's economics brain trust -- Glenn Hubbard, Greg Mankiw and a couple other economists who are oddly always much more intellectually honest when they're not cashing checks from Republican politicians and elected officials -- released a fancy paper attempting to prove that the stimulus made the recession worse and that Romney's regressive "Economic Recovery" plan would do anything other than slash taxes on rich people.

Ezra Klein, bless him, emailed all the independent economists cited in the paper, and each one of them disputed the arguments their work was cited to support. "Most of the research is pretty positive on stimulus,” said one whose work was supposed to show that the stimulus failed.

Finally, Mitt Romney attempted to heroically defend the legacy of President Bill Clinton with an ad attacking the Obama campaign for supposedly trying to weaken the welfare reforms Clinton famously signed. This was foolish, because Clinton is still a member of the other party, and he quickly released a statement calling Romney's ad "not true." And it's bigger news when Bill Clinton accuses you of dissembling than when some economist no one's heard of does. Romney's attempt to bring welfare back as a wedge issue led to more headlines about his campaign's honesty problems, and another question for Romney that he'll refuse to answer for the remainder of the campaign.

Coincidentally, "Annie Hall" is one of Mr. Romney's favorite movies (along with "O Brother, Where Art Thou?" -- his Coen brothers fandom is the sole successfully humanizing Mitt Romney factoid I've ever heard).

This variety of campaign fact-checking is the sort of thing journalists and bloggers neck-deep in campaign coverage live for. It leads to good "smack down" headlines and, occasionally, some fun policy wonkery. (It's been a good August for substantive policy debates, Dave Weigel almost convincingly argues.) But as satisfying as the McLuhan moments are for partisans and reporters, this stuff actually doesn't matter that much in terms of winning or losing a presidential election. The small number of undecided voters in tossup states who'll actually decide this thing really don't care whether Mitt Romney misrepresented a popular scientist's thesis. The voters committed to Romney won't have their faith shaken by the revelation that (pointy-headed) economists think his tax plan is based on misreading of their work.

But they do illustrate what sort of politician Romney is, and they make up a part of the aggregate of media nuggets -- both substantive and totally puffy -- that define a candidate to voters. And I think the frequency with which this is happening to the Romney campaign provides pretty compelling evidence for one major argument made in Noam Sheiber's profile of Romney campaign strategist Stuart Stevens: Romney's running a pre-Bush vs. Gore campaign.

Sheiber says Stevens, who helped craft George W. Bush's media image in 2000, is still operating as if the political press hasn't dramatically changed since 2000, when ... well, when they were awful. The mainstream campaign press had a bad habit of swallowing any bullshit campaign spin, repeating untrue assertions, and happily pushing "narratives" put forth by the Bush campaign. Stevens' job was to make Bush seem affable and regular and to make Gore seem like an aloof, lying, robotic girly-man elitist. The press followed his lead, and the liberal blogosphere was basically born as a response to the horribleness of 2000 campaign coverage (and it grew up in response to horrible Iraq war press coverage). The Internet has since made fact-checking both easier and more popular, and it's gradually eroded the ability of a campaign to push a misleading attack without being challenged on its merits.

Mitt Romney seems to still think that he can simply use the press as a delivery mechanism for his campaign's messages and expect them to be reported relatively uncritically. This explains a lot that at first blush seems odd about his strategy from why he thinks his refusal to release more tax returns should simply be the end of the issue, to why he doesn't think he should be held accountable for previously stated political positions, to why he doesn't expect backlash when his campaign produces blatantly dishonest attack ads. The press has evolved, thank God, since 2000. They're now willing and able to produce Marshall McLuhan when his name comes up.

Update: I left out the actual first example of Mitt Romney being Annie Hall'd by the press, and of course it involved a writer I named and linked to in this post. In June, Romney claimed that Noam Scheiber's book "The Escape Artists" says the Obama team "knowingly slowed down our recovery in order to put in place Obamacare." That is a gross distortion of what Scheiber's book says, as he told TPM when they asked. (Thanks, Jason Linkins.)