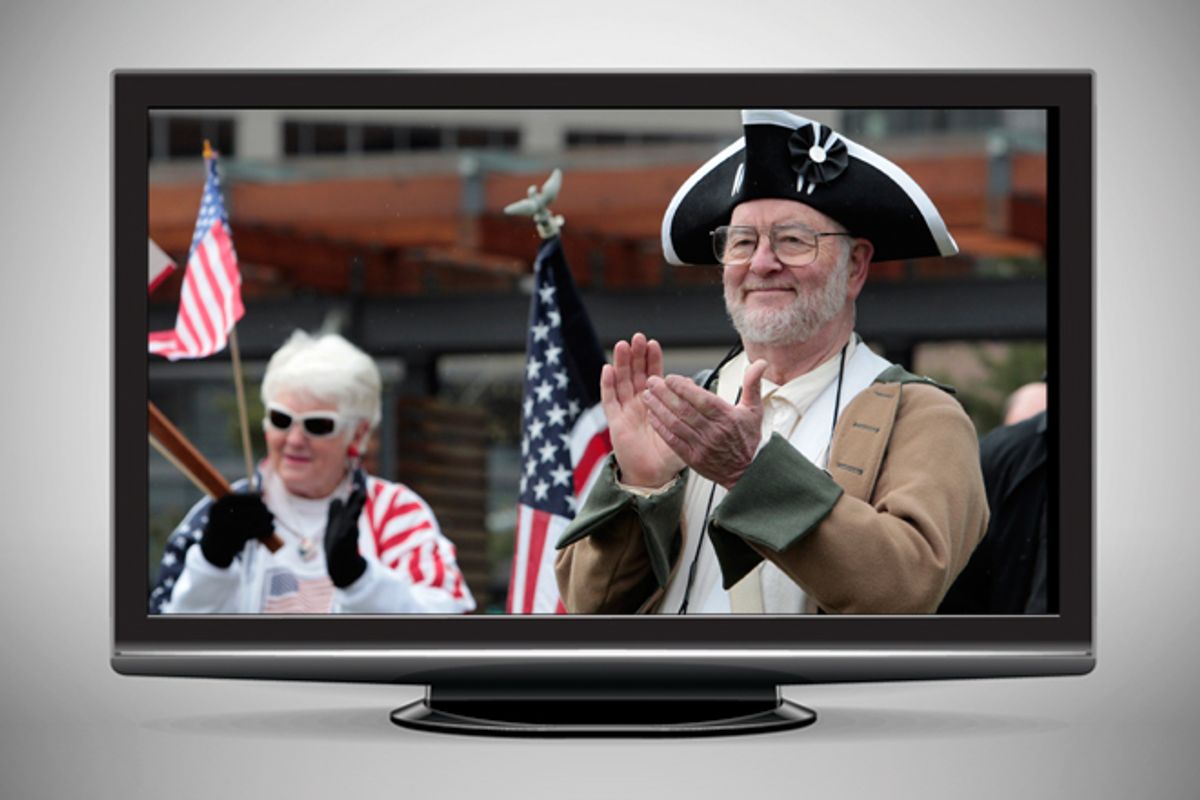 Alabama was the first state in the nation to create a public television network in the early 1950s, but now, the network may be the nation’s most vulnerable, thanks to an attempted coup from its conservative overseers. A judge in the state heard testimony this week in a lawsuit on the alleged wrongful termination of the network's former executive director and CFO, who were apparently fired after refusing to air overtly religious content. The network’s license is up for renewal this year and donations have dropped off, raising the stakes of the conflict between the network's politically appointed commissioners and its professional staff. Though the controversy has been largely missed by the national media thus far, it gets at the heart of key questions about religion in public life and government spending that have gripped the nation in the Obama era.

“We feel like we’re victims of a hostile takeover,” an Alabama Public Television employee who helped blow the whistle on the commissioners’ plan told Salon. The employee asked to remain anonymous because the chairman of the Alabama Educational Television Commission, the board of political appointees who oversee the network, has issued a gag order with an implicit threat of retaliation against employees who speak to the media. “This is going to set a national precedent. Everyone is gunning for public television; this is how they’re going to do it,” the source said.

At the center of the controversy is the work of David Barton, whom NPR called yesterday in an unrelated story, “The most influential evangelist you've never heard of.” Barton is an amateur historian who holds no advanced degrees or affiliations with universities, but has nonetheless built a massive following among conservative activists with his revisionist history that dismisses the separation of church and state as a “liberal myth” and argues that the U.S. was founded as Christian pseudo-theocracy. He’s a regular on Glenn Beck’s show; Mike Huckabee declared that he wished “there would be something like a simultaneous telecast and all Americans would be forced, forced -- at gunpoint, no less -- to listen to every David Barton message.”

Barton’s work has been dismissed or discredited by mainstream and Christian historians alike (a professor at the evangelical Grove City College recently wrote an entire book debunking Barton’s theory on Thomas Jefferson), but Alabama’s public television commissioners wanted to air Barton’s videos. In one segment the commission considered airing, Barton gives a tour of the U.S. Capitol and declares, "The more one learns of this building, of how religion was openly embraced and practiced here, of how strongly and how openly religious our Founding Fathers and early leaders actually were, the more illogical it is to assert that America's history requires her to maintain a secular, religion-free government and public society.” "Lots of other programs cover the negative stuff. This makes you feel good about being American," commissioner Rodney Herring explained.

The commissioners wanted other changes too. The board successfully revised APT’s mission statement to strike the network’s long-standing diversity statement. According to Current, a public broadcasting trade magazine that has done excellent reporting on the controversy, the efforts have been led by Herring, a chiropractor with no experience in broadcasting or education, who was appointed to the board by Republican Gov. Robert Bentley last year. Herring apparently objected to a protection for “sexual orientation” contained in the old diversity statement.

From here, accounts diverge. What we do know is that on June 12, Allan Pizzato, Alabama Public Television’s longtime executive director, and his deputy, CFO Pauline Howland, were called into a meeting of the commissioners and told to clean out their desks and immediately vacate the network’s Birmingham headquarters. Minutes from the meeting obtained by Current show that Pizzato expressed  "grave concerns" about the Barton videos, saying they were inappropriate for taxpayer-funded public television and could jeopardize the network’s license. Instead, Pizzato proposed a new show that would address creationism and religiosity in America, but from a more dispassionate point of view. The commissioners then went into a closed-door executive session, where they decided to fire Pizzato.

Pizzato sued, saying the commissioners violated the state’s open meeting laws by discussing his job performance in a private session. “Several months ago, it became clear that certain members of the Commission wanted to impose their own personal, political and religious views on other members of the Commission, the programming that aired on Alabama Public Television, the staff and the direction of the station itself,” his lawsuit says.

The commissioners, meanwhile, maintain that Barton’s videos had nothing to do with the decision, though they’ve been unable to provide convincing reasons for the abrupt terminations. "We wanted some freshness there. Some zest,” Commission chair Ferris Stephens said. In 2011, Pizzato was named CEO of the year for nonprofits by the Birmingham Business Journal. Over his tenure he had helped the network wn 17 Emmys and 25 Emmy nominations.

The firings prompted massive backlash. Many members of a separate board of an affiliated foundation that collects private donations for APT resigned in protest. Vanzetta McPherson, a conservative former judge who resigned from the foundation board, told the Birmingham News, "I reject their attempt to extend their ideology to APT. I would feel the same way if they had a completely antithetical ideology." Faithful America, a national progressive faith organization, local religious leaders and others delivered 114,000 signatures on two petitions protesting the firings. Donations to the station have reportedly plummeted in recent weeks as people feel uncomfortable giving to the network amid the controversy.

The ombudsman for the Corporation for Public Broadcasting, the national organization that distributes federal grants to public radio and TV, wrote a scathing report about the firings and the Barton videos. “The demand by some political appointees of the Alabama Educational Television Commission that APT staff broadcast tapes by David Barton's WallBuilders group was improper, unethical, and outrageous.”

APT’s chief operating officer, Charles Grantham, also resigned, as did an interim director appointed by the commission, though the resignation has not gone into effect for the latter. Grantham wrote an open letter to the governor on July 19 expressing dire concerns about the future of the nation’s oldest public broadcasting network. “Now a shadow is being cast over APT by its own directors. … It is my belief that the firings were based solely on ideological differences and personality clashes between Mr. Pizzato and some of the commissioners,” he wrote. The letter goes on to note that “some actions might jeopardize the licenses of APT” and concludes, “If something is not done immediately to stop this destructive spiral, it may be that history will record that under the watch of Governor Robert Bentley, Alabama Educational Television died an untimely death.”

Some critics have speculated that this may be the ultimate goal of the activist faction of the commission. Across the country, public broadcasting budgets are on the chopping block. Republicans in Washington tried to strip funding from the Corporation for Public Broadcasting, NPR has long been a bugaboo of conservative activists, and anti-spending Tea Partyers are opposed on principle to taxpayer funding for public broadcasting. “There could be a much bigger, darker picture here,” our source said. The commissioners, several of whom have political ambitions, could “go back to our constituents and say, ‘yes! We got rid of this godless liberal public television,’” the source noted.

It’s worth noting, though it appears to have gone unnoticed so far, that two of the commissioners have a clear history of right-wing political activism. Les Barnett, who is one of the three main commissioners pushing the changes, for several years hosted a weekly radio talk show on American Family Radio, the network of the American Family Association, best known for hosting prominent anti-gay activist Bryan Fischer. The Southern Poverty Law Center, which is also based in Alabama, has labeled AFA as a hate group. And Herring, who reportedly led the drive to change the mission statement, has spoken at Tea Party rallies.

But the momentum may be shifting against the commissioners. In court on Monday and Tuesday, the commissioners’ case did not stand up to scrutiny. They had been trying to get Pizzato’s suit thrown out, but Jefferson County Circuit Judge Joseph Boohaker ruled yesterday that the trial will proceed, as there was "substantial evidence" that the commissioners violated open meeting laws, the AP reported. The court will eventually get to bigger questions as well.  According to our source who was in the courtroom, Judge Boohaker commented, “It was obvious the commission was not making decisions in the best interest of APT.”