Fox News and Glenn Beck want you to think a Phoenix pastor was jailed for his beliefs. It's not true 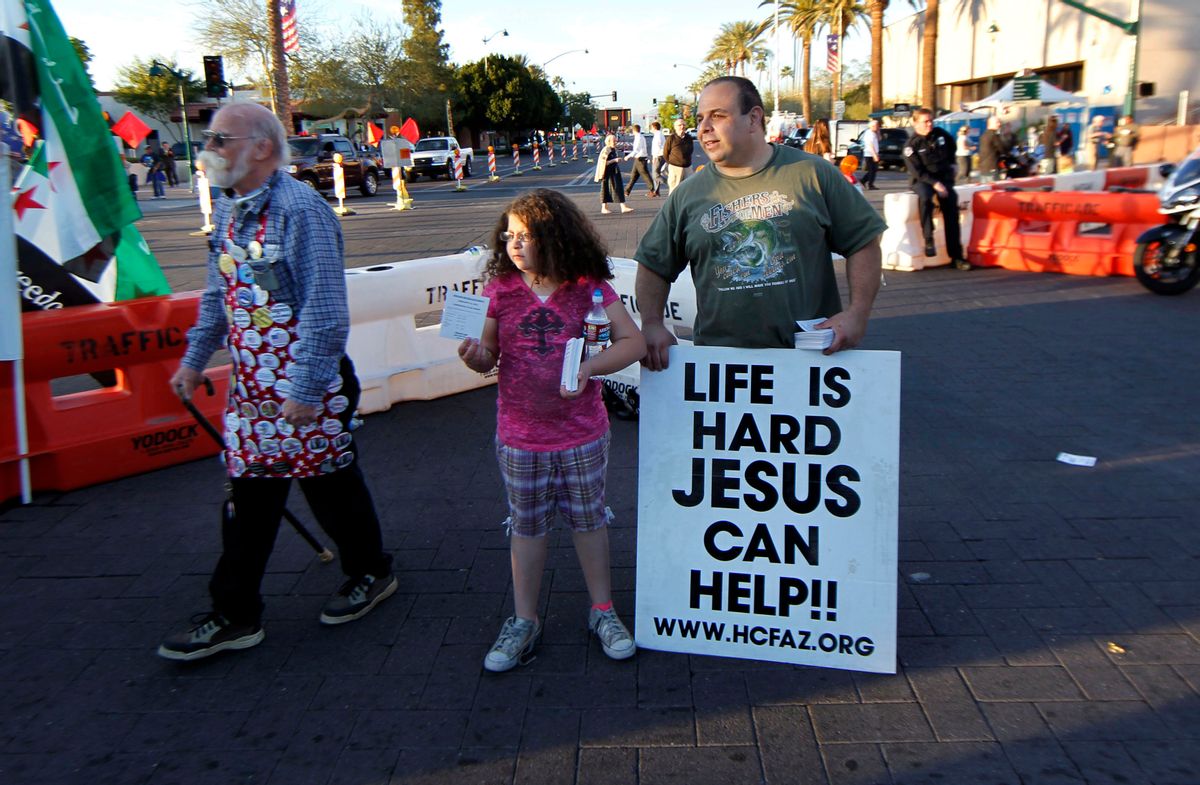 Big Government Regulations Run Amok, Snatch Freedom From Private Citizen, Ban Backyard Bible Worship! If there is a God, Fox News should thank Him for this story.

Fox's "fair and balanced" version goes like this: In July, a Phoenix pastor was jailed by overzealous regulators for holding Bible studies in his home. Only a church, said the city, could host a large religious congregation. The pastor's private gatherings were forcefully disbanded, and he was incarcerated in a Guantanamo-like facility in the desert.

The other version, reported by the Phoenix New Times, goes this way. In 2007, Michael Salman built what he called a garage on his property and began using it to hold church services. Up to 80 people would come to worship as often as twice a week. Eventually the city cited Salman for not having the proper permits to create a church. But the next year, Salman upped the ante, building himself a 2,000-square-foot "game room." And when he continued to use it to preach to large groups, the city cracked down. Sixty-seven civil-code violations later, Salman finally went to Tent City jail last month.

There's a meaningful conversation in all of this about whether these codes make sense. Instead, it's become an asinine wingnut fight about nonexistent Christian oppression. The Glenn Beck-connected website the Blaze -- a conservative publication whose ads nevertheless want to tell me one weird trick that will drive her crazy -- is eating it up: "Christian Fined & Sentenced to 60 Days in Jail Over AZ Home Bible Studies," blares the headline, with wild oversimplification.

Civil liberties attorney John W. Whitehead got a little closer to the meat of the matter with a screed on the Huffington Post that piles property rights on top of the Christian martyrdom. Mashed together, the two issues make for a potent conservative narrative: the gubmint wants to tell you how you should live, even when you're in your own house. "Michael Salman is merely one more unfortunate soul caught in the government's cross-hairs, only his so-called crime deserving of prosecution was daring to take part in a time-honored tradition that goes back centuries -- gathering with family and friends at home for prayer and worship," writes Whitehead.

As usual, the truth is somewhere in the middle. Salman wasn't just taking part in a time-honored tradition with friends and family. He was running a church. According to the city of Phoenix: "He held services twice a week and collected a tithe at the services. The building that he held services in had a dais and chairs were aligned in a pew formation." (To be fair, "pew formation" just sounds like rows.) "He held himself out as a being a church through the media (Harvest Christian Church) and claimed a church status for tax exemption purposes on his property."

Fair enough. But should all churches be treated as equal under the city's codes? This was clearly not just a Bible study, but it wasn't exactly Westminster Abbey, either. And that's what gets people riled up about these laws. Sixty-seven code violations? Judging a 2,000-square-foot room by the same criteria as a full-size church with a steeple and hundreds of congregants is bound to turn up a lot of infractions. It would be like a team of inspectors holding your kitchen to the same standards as the kitchen at Le Bernardin. Salman had "up to 80 people" over, says the city; Salman insists it was more like 30 or 40. He says all the cars were parked on the property, not all over the street. And some of the code requirements for an actual church -- handicapped parking, emergency exit signs, sprinklers -- seem absurdly out of place when you're talking about gatherings in a person's private home.

This lack of flexibility only gives fuel to conservative attacks on zoning -- anecdotes that make land-use ordinances in general seem like draconian government overreach. Such ordinances are important, but individual stories of codes that seem to enforce nothing purposeful can make even pro-planning people want to throw the whole lot out the window. My parents built a house in New Hampshire last year and had to delay moving in for several months because they didn't yet have a banister on one staircase. A few years ago, my journalist friend Caitlin started baking pies at home and selling them to friends, until she was shut down by the New York City health department. (She's now a pastry chef at a celebrated restaurant.)

Last year, a bipartisan panel of legal experts testified to Congress that the federal criminal code is now so large that people are violating it without intending to. They estimated that there are 4,500 criminal statutes, and the number of regulations has grown to 300,000, a leviathan of illegality that can easily -- can only -- be enforced selectively.

Is that what happened here? While Salman manipulated the land-use laws and needed to be stopped, it was his neighbors who complained to the city and used the codes to get him shut down. Their specific complaints are unclear, but according to the Phoenix New Times, Salman wasn't particularly popular in the neighborhood. This is a tidy, fairly well-off, suburban-style stretch of Phoenix. And Salman seems to be kind of a weird guy who holds Jesus signs by the side of the road and once did a stint in prison for a violent crime (that's where he found God). "Frankly, I think the trouble at the Salmans' is less about the impact of a dozen cars every week and more about the relationship between Michael Salman and his neighbors," wrote New Times reporter Sarah Fenske.

Places like northwest Phoenix can be isolating. People are often confined to their houses and cars, neighbors don't always talk to each other, and disagreements get resolved by calling the authorities. Codes and regulations replace real-life interaction as the method for working through disputes. That kind of urbanism means neighbors can only be a bother, not an asset. I wouldn't particularly want to live near Michael Salman, but I respect the fact that neighborhoods are shared space, and that annoying and disagreeable characters are, within reason, part of living in society.

Salman is reportedly now holding Bible studies in prison, the David who fell to Goliath. Unfortunately, right and wrong aren't that cut-and-dried in city planning, no matter what the laws say.