Not the comedian, but his uncle Nick, who took on North Carolina's infamous, racist senator Jesse Helms in 1972 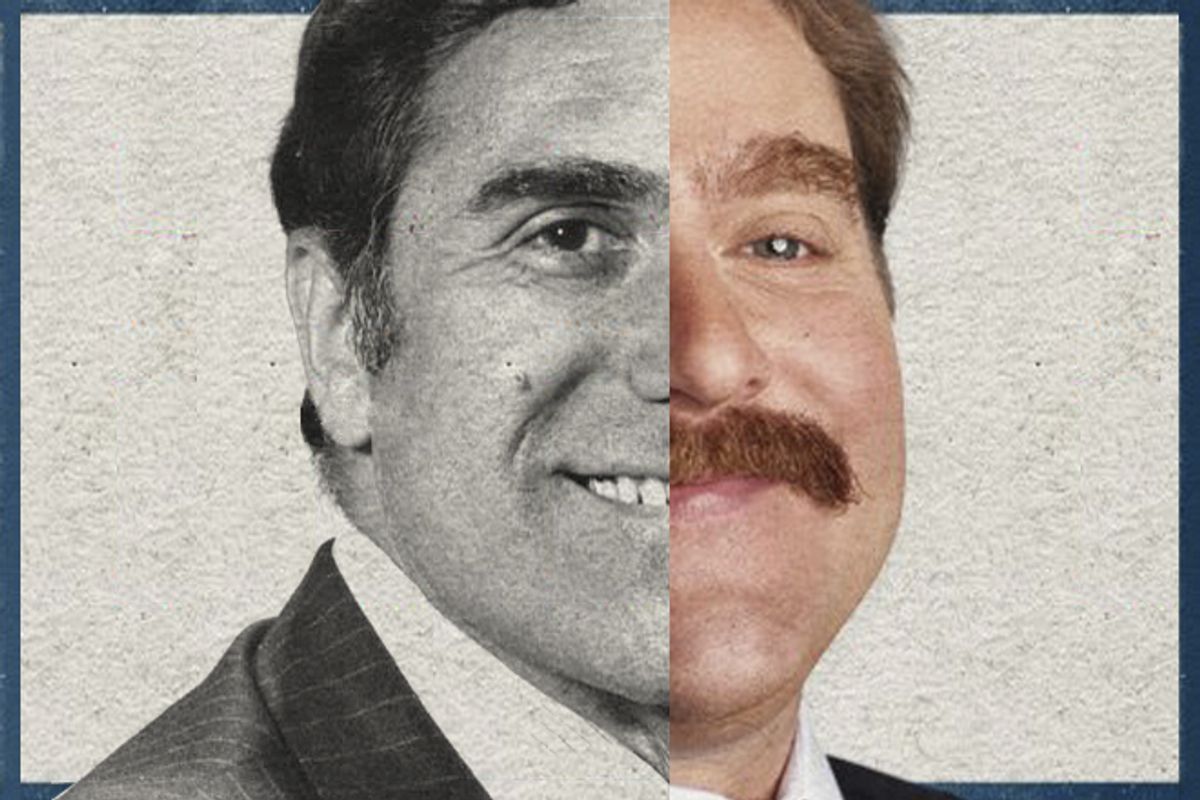 Remember the old saw about how history repeats itself "first as tragedy, then as farce"? Zach Galifianakis’s new comedy "The Campaign" may be a farce, but it recalls a tragic election that changed the course of politics in America.

In the film, Galifianakis plays Marty Huggins, an eccentric upstart who challenges long-term Rep. Cam Brady, who expected to run unopposed. The film, directed by Jay Roach, mastermind of the execrable "Meet the Parents" series, is unlikely to offer sharp political satire, but we can hope it’s at least infected with a touch of Tea Party–era lunacy.

Zach is not the first Galifianakis to run for office. Forty years ago, his uncle Nick battled conservative commentator Jesse Helms for a place in the Senate. The election vaulted Helms into power for the next 30 years, transforming a former Democratic stronghold and ushering in a long period of conservative dominance for North Carolina that only appeared to break with Barack Obama’s historic (and wafer-thin) victory in 2008.

The story of Nick Galifianakis sounds awfully familiar: a liberal law professor with a “funny name” and immigrant roots who runs for office and slays an establishment giant. Galifianakis was born in 1928 to Greek immigrant parents in Durham, N.C., where he studied law and eventually taught at Duke University. In 1966, he won a seat in Congress, representing a district that stretched from his hometown to Winston-Salem and later encompassed the state capital of Raleigh. In a South that was only then breaking away from Jim Crow, his ethnic heritage stood out as relatively exotic. He brushed off any such concerns, joking to reporters that his name is easy to remember: “It starts with a ‘Gal’ and ends with a kiss.” He would soon find out the politics of race and identity in the South did not always work so smoothly.

Rep. Galifianakis was young, Democratic and antiwar, representing a progressive base in the emerging Research Triangle area of Raleigh, Durham, and the college town of Chapel Hill. High-tech firms like IBM and government research agencies drew scientists and engineers to the Triangle, many of whom migrated from northern climes such as New York and New Jersey. The area was the scene of many civil rights struggles in the 1960s, often led by African American students from Raleigh’s Shaw University, and Chapel Hill made history in 1969 by electing Howard Lee as the first black mayor of a majority white town in the South since Reconstruction.

North Carolina seemed ready for change when Galifianakis took on veteran Democratic Sen. Everett Jordan in 1972. A 75-year-old textile magnate, Jordan got a slow start countering his young rival, who won nearly 50 percent over four competitors in the primary and went on to win the runoff, primarily on his strength in the growing cities of North Carolina’s Piedmont Crescent. Jordan fared better in the rural parts of the state, but not enough to beat Galifianakis’s urban advantage. The newly minted 43-year-old nominee vowed to represent “the black and whites, the east and west, the urban and rural” who “wanted to move to a better tomorrow, rather than backwards to a rerun of the past.”

Jordan threw his support behind the young Democrat, but a Republican named Jesse Helms had other ideas. Helms had moved up through radio and TV broadcasting in the 1950s, and he held a prominent post on Raleigh’s WRAL-TV, where he tweaked the excesses and perversities of Great Society liberalism in op-eds on the nightly news. Few gave Helms a chance when he decided to run for Jordan’s seat, but he saw an opening with Galifianakis as his opponent. “I share the disappointment of Sen. Jordan that his campaign was marred by inaccurate statements,” Helms declared, eyeing disgruntled Democrats: “I am gratified that many of Sen. Jordan’s supporters have already pledged their support to me.”

Galifianakis ran well ahead of Helms for much of the campaign, despite his liberal bonafides and the unpopularity of the national Democratic ticket led by Sen. George McGovern. But Helms unleased the vicious politics of innuendo that would make him notorious for the rest of his career. (In fact, Helms had cut his teeth in the fateful campaign against liberal icon Frank Porter Graham in 1950, which used rumors of race-mixing and miscegenation to elect segregationist Democrat Willis Smith in his place.) The Helms campaign reminded voters that “He’s one of us,” unlike a certain other, unnamed candidate. It also tied the Democrat to his party’s reeling presidential candidate with the label “McGovernGalifianakis — one and the same” — not unlike the tactics Republicans used against former Gov. Roy Barnes (“Roybama”) in Georgia two years ago.

In the end, Helms broke away from Galifianakis in the polls and won by eight points, thanks in part to outspending his opponent. But Helms' margin was vastly smaller than the 40 point victory scored by President Richard Nixon against McGovern in the state, suggesting that Galifianakis could have won if not for the national GOP landslide.

Thus, Helms — the anticommunist Cold Warrior, the serial race-baiter with a famously tart tongue — became the face of North Carolina for 30 years, not Galifianakis. Helms spent the rest of his career railing against the “liberal establishment” and exploiting racial fears and resentments. His infamous “Hands” ad, for instance, blamed affirmative action for giving jobs to unqualified minorities in his 1990 race against former Charlotte mayor Harvey Gantt, a black Democrat.

That year, Tar Heel–born columnist Sandy Grady heaved a deep sigh. His northern friends often asked, “How can a progressive state like North Carolina keep electing somebody like Jesse Helms?” N.C. had won fame for the high-tech industries of the Research Triangle, where the HIV drug AZT was developed, and the finance capital of Charlotte, which was nationally known for its relatively successful approach to school desegregation. The state seemed less reactionary than some of its peers in the South, yet it kept sending Jesse Helms to Congress.

“The image of North Carolina as ‘progressive’ is a genteel hoax,” Grady lamented. “Sure, it has a couple of great universities, some good writers, the gleaming towers of Charlotte, the brains of the Research Triangle. But there’s a dark underside: low wages, high infant mortality, subpar schools, low SAT scores. The state’s caught between the Bible Belt and the Sun Belt. Between 1865 and 1990.”

Jesse Helms might not have hailed from 1865, but he did represent one strain of the state’s political culture. He often won narrow victories over moderate Democrats such as Gantt and Jim Hunt, who raised the hopes of the state’s perennially frustrated liberals. In 2008 the balance finally tipped. The late conservative commentator Bob Novak credited candidate Obama’s successes in North Carolina to “universities, black areas, and the wine-and-cheese crowd in Charlotte,” while his primary opponent Hillary Clinton prevailed in the “white rural counties.” The same dynamic was repeated in November, when Obama squeaked by John McCain to become the first Democratic president to win the state since 1976. As usual, the Triangle counties were blue oases in a desert of red.

The 2012 election will likely duplicate this divide between urban liberals and rural and suburban conservatives — the key dynamic in U.S. politics in 2008 and most of the last 40 years. The same tactics employed by Helms against Galifianakis will likely be trotted out against Obama — the othering of a candidate who is not “one of us.” Antiwar liberalism had a fighting chance in North Carolina in 1972, though, even if voters ultimately elevated Jesse Helms to power instead. Like much of America, the state remains torn between its progressive impulses and a politics of reaction, rumor and innuendo. It is important to remember that voters had a choice 40 years ago, as now — and that the consequences of today’s “other” losing could be as profound as Galifianakis’s loss.

Alex Sayf Cummings is an assistant professor of history at Georgia State University and the author of the new book "Democracy of Sound: Music Piracy and the Remaking of American Copyright in the 20th Century." He is also a co-editor of the blog Tropics of Meta.