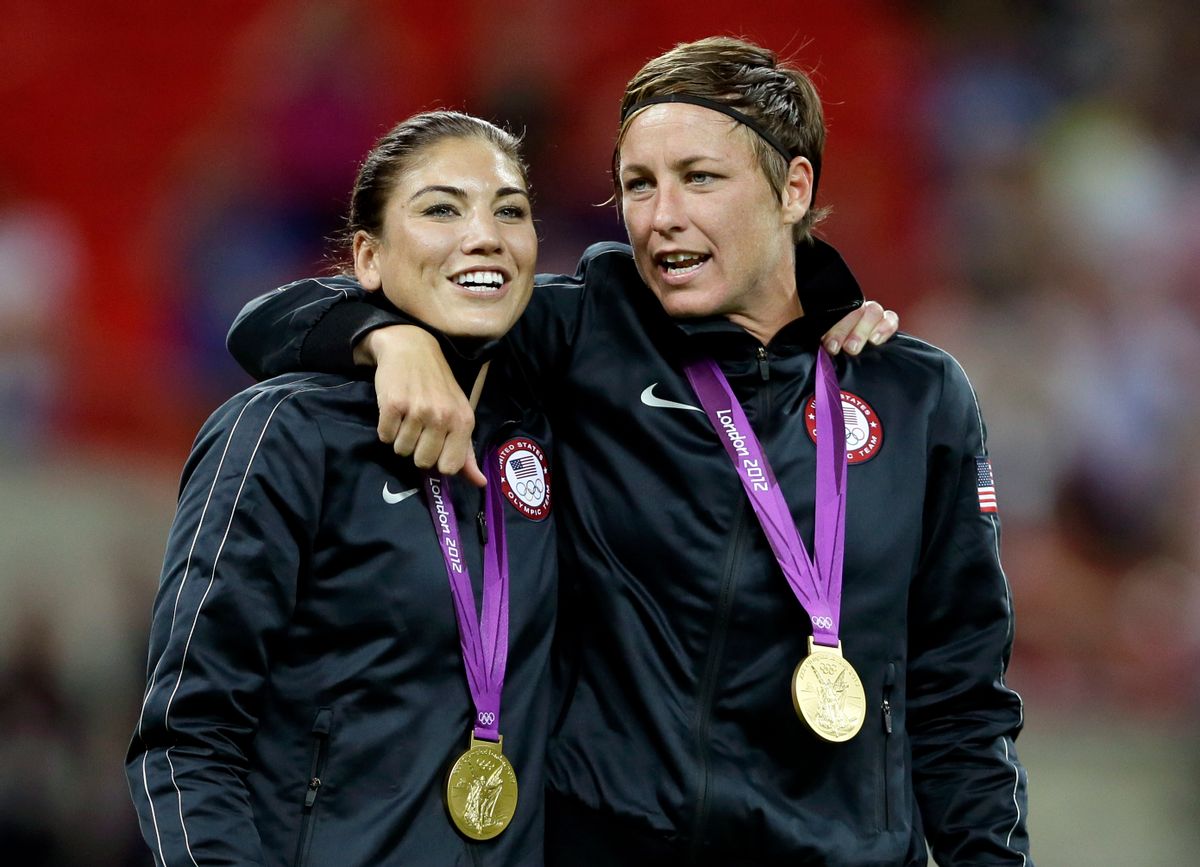 Have you ever seen a guy in the stands holding a mash note for a female athlete? I mean, you see stuff like that at Yankee Stadium for Derek Jeter or at MetLife for New York Jets quarterback Mark Sanchez. But at the end of the U.S. women’s historic 2-1 victory over Japan at Wembley Stadium yesterday, I saw a male fan with a poster directed toward the gold-medal goalie: “Forget Han Solo. Marry me, Hope.”

The most iconic group of women athletes this country has ever produced came up with the biggest American team triumph since the Miracle on Ice in 1980. I think this one was even more important. The victory of the U.S. hockey team over the Soviets 32 years ago was a relic of the Cold War, blown out of proportion  by a mush-headed worldview in which political failures are somehow redeemed by sporting events.

Anyway, Americans didn’t head toward the skating rinks in droves in the succeeding years to become hockey players. But Abby Wambach, Alex Morgan, Tobin Heath, Hope Solo and the other members of the American women’s soccer team weren’t playing a perceived national enemy. If anything, their epic battles with the Japanese women for international supremacy in soccer has been the friendliest intense rivalry imaginable.

They have changed the way millions of Americans think about sports, and remember, this wasn’t even a sport that, less than a generation ago, most people thought should even be in the Olympics. Next week when you hear people calling this the greatest Olympics in memory – and they will, if they’re not already – keep in mind that two of the most inspirational moments came from tennis and soccer, events that many purists still don’t want included in the games.

I hope this establishes my credentials as a fan so I can win some back as a sports journalist. I thought all through the Olympics that the U.S. women’s team had pretty much the same flaws as they showed in their World Cup failure last year. Namely, a tendency to let up pressure much too early in the contest – after Carli Lloyd opened the scoring in just the eighth minute, it seemed like most of the rest of the first half was spent on the U.S. side of the field – as well as an unfortunate propensity for having a big psychological letdown after an important goal and allowing their opponents to get right back in the game with an important goal of their own.

Also, as much as I love these ladies, I would have liked them a little better if they had talked a little less. I don’t mean the kind of pep talks they gave each other during the games, or even the motivational speeches they gave to the press leading up to big games. I mean their thin-skinned reactions to criticism. Hope Solo’s immature reaction to Brandi Chastain’s sober assessment of the team’s weaknesses could, on a lesser team, have been distracting and ultimately devastating.

And I wish Carli Lloyd, whom I’m particularly fond of as she grew up near my father’s family in South Jersey, had resisted the temptation to use yesterday’s postgame press conference as an opportunity to get back at her coach, Pia Sundhage, for sitting her down in recent games.  “I think I just come up big in big moments,” Lloyd said after scoring both U.S. goals. “That’s what I trained for.” Carli, you’re supposed to say the entire team came up big in the big moments; that’s what everybody trains for.

For her part, the coach who worked a near miracle with this team was practically put in the position of having to apologize: “She (said) that I was wrong, and that I’m not that perfect,” Sundhage said with a smile and a shrug. No, she didn’t, coach, and now she didn’t. When she was erratic and underperformed, you put her butt on the bench, which is where it should have been. And if that motivated her to come back and try harder, well, then, more power to the both of you.

For me, the most compelling back story of the last week of the Olympics – more compelling even than Usain Bolt’s -- belongs to David Rudisha, the Kenyan runner who yesterday blazed to a 1:40.91 in the 800-meters, taking a gold medal and setting a world record.

In February, Rudisha visited London and was given a personal tour of Olympic Stadium in progress by two-time gold medalist Sebastian Coe. The head of the London Olympics showed David the new track.

“Lord Coe,” Rudisha told Reuters, “is a very good friend of mine and … took me around the stadium. That was good for me.” Why, a journalist asked him? Because, the 23-year-old smiled and explained, “The track is fast. It looks good.”

How could a track look fast? Compared to what? In a segment aired yesterday before the 800-meter, I learned why.  Rudisha’s trainer  is an Irish Christian brother from Cork named Colm O’Connell, who came to the Rift valley in Kenya in 1976 to teach at Iten’s Catholic boarding school, St. Patrick’s. He decided to stay a while.

A few months after his arrival, he took a shot at coaching Kenyan boys and girls in running because he thought it would bring him closer to the people. Here’s the part that grabbed me:  He had no formal training as a running coach. He just taught them what he had learned in Ireland. He was enthusiastic to teach, they were enthusiastic to run. As David told an NBC commentator, “We grow up running in Kenya. We run everywhere – we run to school, we run to pick up mail, we run to get groceries, we run to the doctor.”

In 1986, 10 years after his arrival, O’Connell took a team of nine runners, including seven from St. Patrick’s, to the first World Junior Championships in Athens and brought seven medals back to Kenya.  A dynasty was born.

O’Connell first noticed David Rudisha, a Maasai tribal boy, in 2004. David ran the 200m and finished fifth, but O’Connell had an eye for talent and made a note to watch for him. O’Connell’s eye was better than even he knew. David’s father, Daniel, O’Connell learned a year later, won a silver medal in the 4x400 relay in the 1968 Mexico City Olympics. He asked David to one of his running camps, where he ran his first 800m faster than the Kenyan national champion.

Here comes the part about the fast track. In David’s town there had been no rubber track of the kind high school and college athletes trained on; the nearest one was 200 miles away, much too far for David to train on. So with some help, David built a dirt track, which he later found out was several meters longer than regulation, digging up and removing hundreds of chunks of jagged rock until it was smooth enough to run on. Still, David was told, it was going to be a slow track.

And so, this past winter when Lord Coe showed Rudisha the track on which he would be running  in the Olympics, he was delighted to see that it was indeed a “fast” track.

I decided to give myself one more dose of synchronized swimming in the hope that I would learn something. I was rewarded. The five-woman Japanese synchronized swimming team was performing to a piece of music so odd that even I couldn’t identify it. Then NBC’s resident synchronized swimming expert named it for me,  “The music you’re hearing is from the soundtrack of 'The Blair Witch Project 2.'”  That’s surely one of the most esoteric songs any Olympic performance will ever be set to. His commentary was, I believe, right on target. It’s a good bet that, with the possible exception of their coach, the only four people on the planet who could have named that tune were the women who were swimming to it.