It's not the economy, stupid 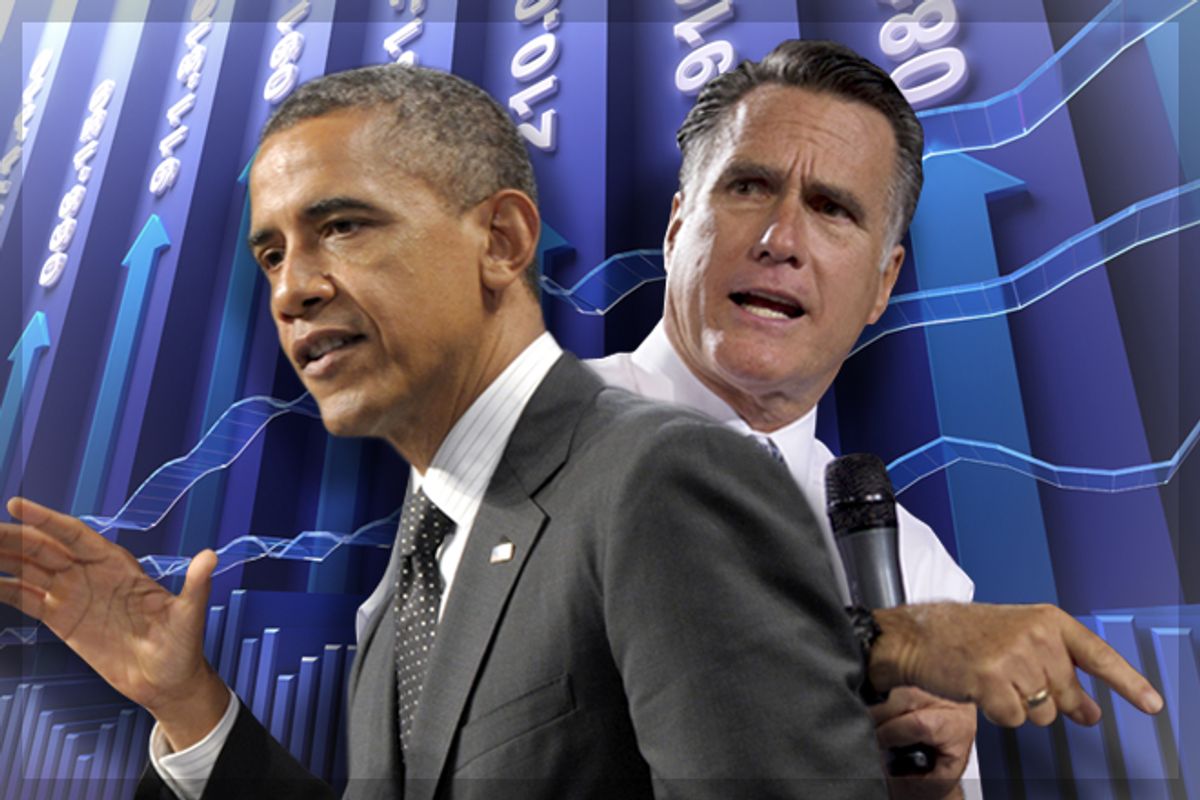 It's time to stop obsessing about the economy. With three months to go before Election Day, it's time to stop treating every monthly government labor report as if the future was indelibly inscribed in its zigs and zags, time to stop letting our psyches pinwheel from hope to fear according to the latest blip in the Philly Fed manufacturing survey or decline in revolving credit-card debt totals. There is no recession lurking just around the corner. Nor will there be a sudden spike in hiring, or plunge in unemployment. Romney and Obama will have to find something else to fight about during the dog days of August and beyond. The economy just isn't that interesting anymore.

It feels almost sacrilegious to write those words. The U.S. economy is hardly what anyone would consider healthy and handicapping presidential elections based on the latest economic indicator is a time-honored election-year pastime. During Obama's presidency it's gone even further than that; the perilous state of the economy has been a full-time pundit employment act. Has there been a single day since Obama's inauguration in which economy-watchers weren't parsing every new data release for its relevance to his reelection?

But if you haven't made up your mind yet as to whom you are going to vote for, the chances that the twists and turns of the economy over the next three months will be the decisive factor seem slim. We're going to get more of what we've already got: sluggish economic growth. Not fast enough to bring down the unemployment rate, but also not signaling an imminent new collapse. All year long, the best economic-based election forecasting models have been telling us that this election is too close to call. A hard look at the available data suggests nothing coming down the pike will change that assessment.

Before taking that close look, two disclaimers need to be made. First, there's always a chance that some kind of major calamity will upset the global apple cart. If Spain declares bankruptcy or a devastating earthquake rocks Shanghai, slow growth could turn into a hasty retreat in as little time as it takes to say "high-frequency trading." In 2008, McCain was closing in on Obama in the polls before Lehman Brothers imploded and the Arizona senator chose to tell Americans that "the fundamentals of the economy are strong." Oops. It's not inconceivable that something similar could happen again.

Second, the fact that new data, going forward, won't determine who wins in November doesn't mean that the past performance of the economy is meaningless. If Obama had engineered a livelier recovery from the crash, if employers were hiring an average of 300,000 new workers a month instead of 150,000 right now, he'd be cakewalking his way back into the White House. The economy is the main reason this election is close to begin with. That inescapable truth leaves plenty of room for Romney and his surrogates to attack Obama on the basis of how he has managed the economy so far. So yes, the economy is already baked into this election.

But those days of waiting for the jobless claims report to drop at the dot of 8:30 a.m. EDT, hyped up and ready to slam out a tweet declaring the latest 20,000 swing up or down as doom or delight? They're over. The thrill is gone. It was the economy, stupid. But not anymore.

So what is the current state of the economy?

The big picture includes some clear negatives. Economic growth in the U.S. has slowed down over the last six months. Job creation has slacked off, the manufacturing sector has weakened, and consumers are spending less. The negative drag created by cuts in government spending at all levels explains some of the dreariness, as do Europe's woes and a slowdown in China, but not all. Five years after the subprime mortgage market officially blew up, the U.S. economy is still just creeping forward. Again, that's why this election is close.

But there are other stories to construct about the economy that are more encouraging. The labor market is not creating jobs as fast as it was over the winter, but July's performance was far better than June's. The most recent Job Openings and Labor Turnover Survey counted 3.8 million job openings -- the most since mid-2008. Jobless claims, as mentioned above, are near their four-year low. The three most recent data points on the labor market do not signal recession -- in fact, when judged against the performance of the labor market over the entire Obama administration's first four years, they look OK.

Housing is another relatively bright spot. Home prices are beginning to rise. Sales of new and existing homes are off the bottom. Mortgage delinquencies are down. Even the troubled government-rescued mortgage agencies Fannie Mae and Freddie Mac appear to be finally off the gurney, moving into the black instead of continuing to siphon off billions of taxpayer bailout dollars. The collapse of the housing sector precipitated the credit crunch and ensuing recession, causing the loss of millions of jobs and massive hardship. But the wounds are finally healing; housing is once again contributing to economic growth.

There are other stats one can point to: Hotel occupancy rates reached 75 percent in July, for the first time since the crash. The federal government is collecting more tax revenue in 2012 than it did in 2011, a pattern mirrored by a majority of individual states. Exports are booming: In July, the United States exported $185 billion worth of goods and services, an all-time record.

A bump in hotel occupancy rates isn't going to swing the election. The housing sector is still a long way from full health. The chances that a global economic slowdown could prove to be too much of a drag to overcome cannot be dismissed. A combination of a big broad-based tax hike along with severe spending cuts in January could easily shock the economy into a real recession -- next year. The economy could definitely use more expansive fiscal and monetary stimulus; these data points should not inspire complacency.

But if you step back and look at the overall performance of the U.S. economy over the past three years, the story that emerges, while not thrilling, also isn't all that frightening. Tim Duy, an economist at the University of Oregon whose Fed Watch updates are required reading for economy-watchers, puts together a group of charts in his most recent post that underscore why the next few months are unlikely to include an economic game-changer.

It's really kind of a boring story. Hardly where we want our economy to be, but hardly slipping into catastrophe, either. It's the kind of economy, sad to say, that we've all gotten used to. And most of us, judging by how tight the national polling has been all year, have already made up our minds whether we blame Obama for the sluggishness, or we'll cut him a break because of how horrible the economy was that he inherited.

Those opinions aren't going to be changed by the next labor report. It's time to find something else to obsess on. How about welfare reform?