The GOP candidate makes a hard pitch to Catholics, and the church is pushing its members to line up behind him 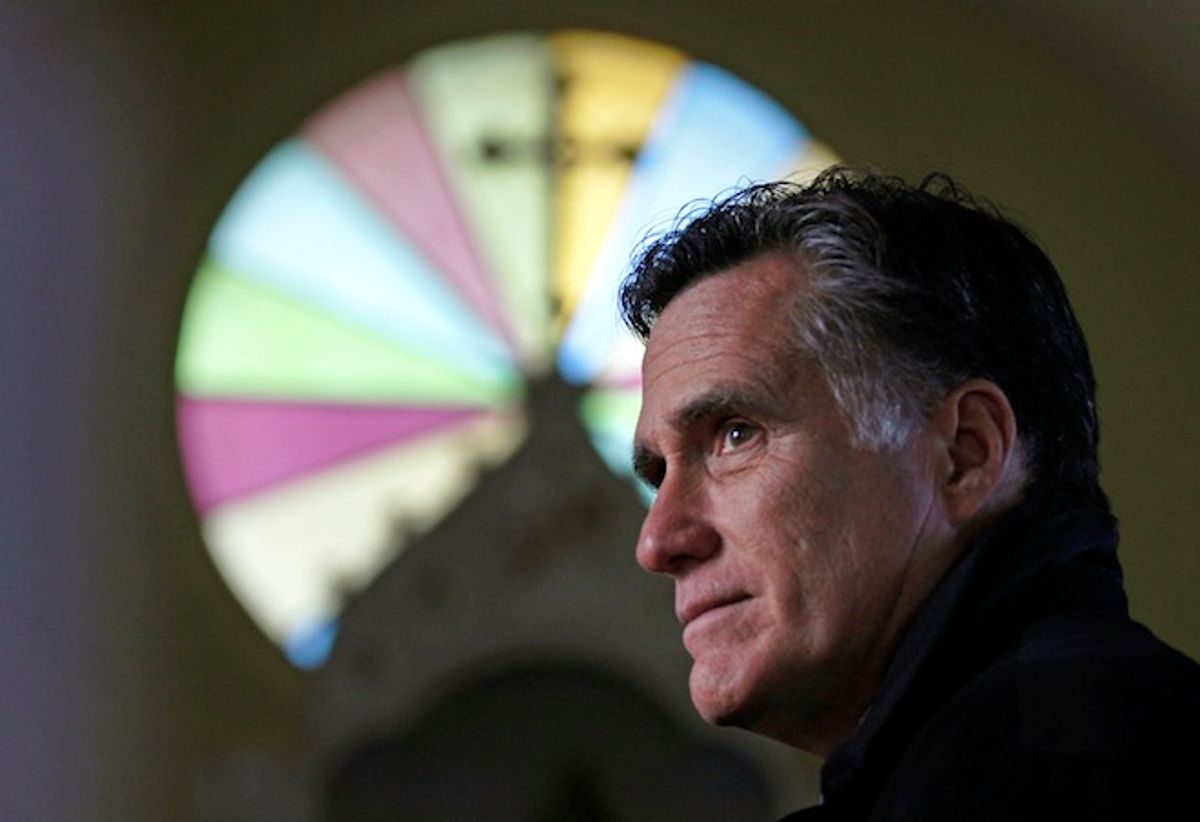 “Who shares your values? President Obama used his healthcare plan to declare war on religion,” intones the ad released by the Romney campaign this week. That’s followed by footage of Romney talking about Pope John Paul II in Poland, that same pope shaking Lech Walesa’s hand, that same Lech Walesa endorsing Romney. Romney practically is the pope, OK? And he doesn’t like the preventive care provisions of the Affordable Care Act.

It’s been in the making for months, but this week clinched it: Both sides of the presidential election are running hard on “women’s rights” versus “religious liberty,” and that’s not going away. Romney was once reluctant to get drawn into this particular fold, before the continued presence of Rick Santorum in the primary essentially forced his hand. But now, in an apparent sign that he hasn’t closed the deal with his own base, he’s back on the cause of allowing employers – even private, non-religiously affiliated ones – to deny their employees coverage for contraception and what is falsely termed “abortion-inducing drugs.”

Obama, on the other hand, has been here for awhile, from the unwavering support for the provision (lobbied for by pro-choice and other health organizations) to giving a call to Sandra Fluke – the same woman whose very presence caused the GOP to wildly veer off the message of “Obama saying that we must be a less Christian nation” to “only sluts want their insurance to cover birth control.”  The Romney ad coincided with Fluke introducing the president in Colorado Wednesday.

What’s fascinating (and terrifying) is that the wedge issue here is no longer abortion, regardless of how badly the Christian right wants to define abortion as the potential blocking of a fertilized egg and ignore the evidence that emergency contraception most likely doesn’t even do it. At a political moment where Personhood supporter Mike Huckabee has already declared, “We are all Catholics,” and an evangelical college is joining in the lawsuits against the provision, it’s broadly clear that the antiabortion slippery slope has inevitably skidded to birth control, where Catholics have always (officially) been. Romney, having such historically weak standing with this increasingly definitive “social issue,” seems to feel compelled to follow them all the way down there.

In exchange, the Catholic hierarchy is doing its utmost to make it worth his while, despite dubious evidence that there is such a thing as a “Catholic vote,” rather than a constituency whose picks tend to reflect broader trends and thus correlate with the winner. “In 2012, I expect the defense of religious liberty to cut as deeply against Obama as 3 million Catholic voters or more,” was Michael Novak’s wildly optimistic prediction in the National Review in June.

This is a long-standing strategy on overdrive. As Linda Greenhouse and Reva Siegel note in their anthology, “Before Roe v. Wade,” 40 years ago Nixon strategists, including Pat Buchanan, recognized that Catholic voters could potentially be peeled off from the Democratic Party over abortion, at a time when the issue didn’t necessarily map by party affiliation. As Novak points out, Nixon lost the Catholic vote by a wide margin in 1968, but in 1972 managed to bring his share up to 52 percent.

But as the debate over the very existence of the “Catholic vote” shows, the long-term impact isn’t a foregone conclusion. The hope for Romney is that it makes a difference in Ohio and Pennsylvania, and possibly with those sympathetic evangelicals. Still, for now, birth control coverage – preventive care! -- isn’t nearly as divisive as abortion, and the Obama campaign is betting that independent women, especially single ones, will have far greater pull.

Baltimore Archbishop William E. Lori felt the need to tell Kathryn Jean Lopez this week, “This is a big moment for Catholic voters to step back from their party affiliation.” He continued,  “The question to ask is this: Are any of the candidates of either party, or independents, standing for something that is intrinsically evil, evil no matter what the circumstances? If that’s the case, a Catholic, regardless of his party affiliation, shouldn’t be voting for such a person.” We’ll see if it works.