Not every Olympian is cut like Ryan Lochte. The games have proven we can all be athletes, no matter our body size 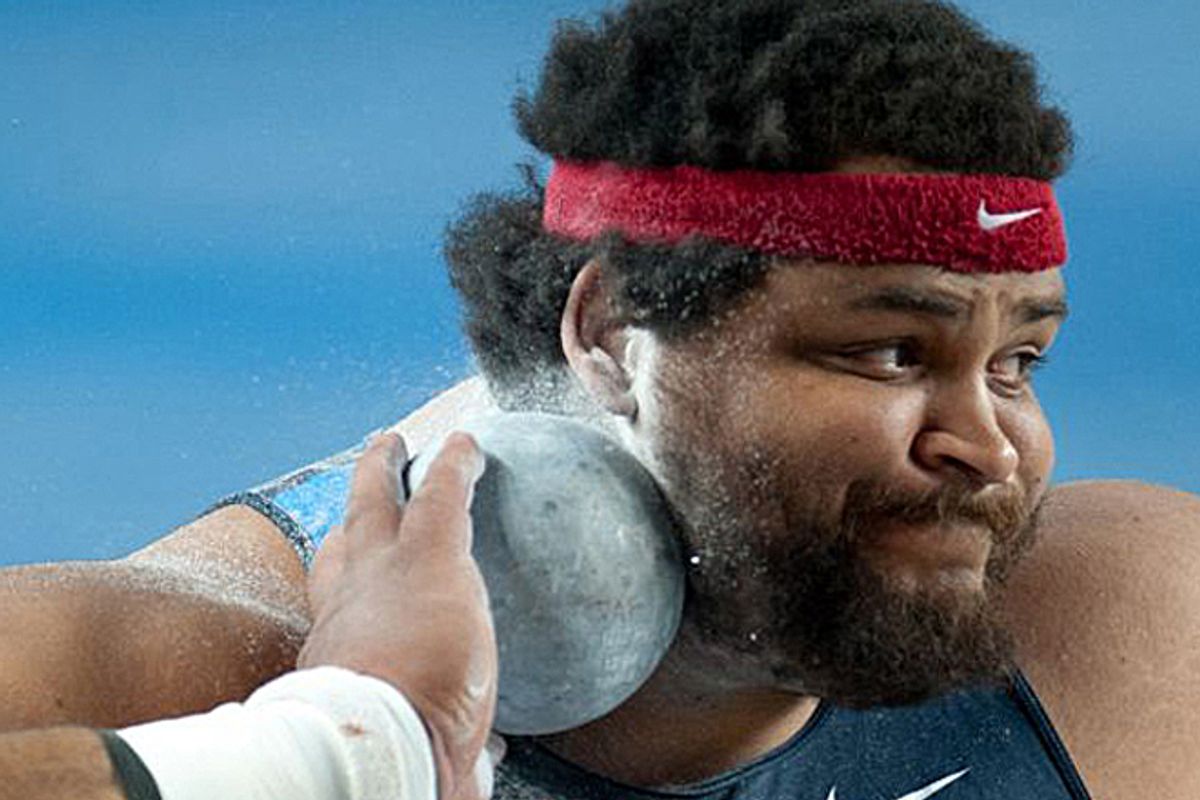 This Sunday, in church, my pastor wanted to talk about bodies. Pastor Debbie is a stocky, solid, strong woman. All week, she’d been watching the Olympics, and all week, she’d been feeling dismayed that she wasn’t as lithe as the swimmers, or as flexible as the gymnasts.

Then she saw 315-pound Reese Hoffa, who won a bronze medal for throwing a 16-pound ball.

“Finally,” she said, “there was someone on TV who looked like me. The shot putter. I was a shot putter in high school.”

I was a long-distance runner in high school. As a sophomore, I was 5-foot-9 and weighed 120 pounds, so lanky my mother forced me to drink a malted milkshake every afternoon. I wanted to play baseball, but even when I could hit the ball, I wasn’t strong enough to hit it out of the infield. So I went out for cross-country and track. While I never won a race, I did earn a varsity letter, and learned a lifelong sport. The Olympics were eight days old before I saw someone who looked like me: Galen Rupp, the 5-foot-11, 134-pound American who won a silver medal in the men’s 10,000.

If there’s any sporting event that should make us feel less self-conscious about our bodies, it’s the Olympic Games. The beauty of the Olympics is not in the beauty of the athletes’ physiques, it’s in their variety. The Olympics features a sport for every human body type, from the smallest, represented by 4-and-a-half foot tall Japanese gymnast Asuka Teramoto, to the largest, represented by Guamanian judokan Ricardo Blas Jr., who stands 6-foot-1 and weights 480 pounds. Somewhere in between, there’s someone who looks like you or me. The Olympics are a rebuke to a single physical ideal for either sex. They’re about functionality, not aesthetics. Their lesson is that no matter how you’re built, your body can do something special. (The BBC produced this widget to match your height and weight to an Olympian’s, so you can find out just what that specialty is.)

Most Olympic body image stories have focused on big women who don’t cut a conventional figure of female beauty, such as weightlifters Sarah Robles, who says she can’t get a corporate sponsorship because she’s not “a girl who looks good in a bikini,” and Holley Mangold, mocked by Conan O’Brien, who tweeted, “I predict 350 lb. weight lifter Holley Mangold will bring home the gold and 4 guys against their will.” But the Olympics are also a showcase for men who don’t fit the usual definition of male athleticism, which is equally desirable to the opposite sex. The Big Four sports we watch year-round -- baseball, football, basketball and hockey -- emphasize size and strength. As a result, most of the guys are broad-chested, muscular and over 6 feet tall. Unlike most guys. But there are plenty of Olympic sports in which those dimensions are a disadvantage. Sports that require speed, agility, flexibility or endurance. Male gymnasts look 5-foot-4 and muscular. If that’s the classic little guy who overcompensates at the gym type, it’s because guys that size might have been lightweight wrestlers in high school, but they never got to play a sport with a cheerleading squad attached.

Rupp has a classic distance runner’s story. As a 14-year-old in Portland, Ore., he was discovered on the soccer pitch by former world-class marathoner Alberto Salazar, whose children attended the same high school. Salazar was coaching cross-country, and persuaded Rupp to switch disciplines. Any male runner who tells you he didn’t really want to play a team sport is a liar. Dathan Ritzenhein, another Salazar protégé who finished 13th in the 10,000, once joked that he went out for high school track because “I couldn’t cut the mustard” on the football field. Writer Hal Higdon, a former national-class steeplechaser, once called his sport “the revenge of the skinnies.”

(Actually, plenty of swimmers are hopelessly clumsy at ball sports, but their sport leaves them looking like Calvin Klein models, not like Christian Bale in "The Machinist.")

"They’re like fuel-efficient cars,” I explained. “The smaller you are, the less energy it takes to run six miles. Galen Rupp is 5-foot-11, but people still say he looks like an elf.”

And then there’s middle-distance runner Leo Manzano, nicknamed “Little Leo” for his 5-foot-5, 125-pound build. In the stretch run of a 1,500-meter race, he looks like a kid shouting, “Guys! Guys! Wait up!”

"I bet Leo Manzano has had the exact same head and face since he was 8,” a (soccer player) friend of mine said.

On Tuesday, Manzano scurried through a field of much taller runners to win silver in the 1,500, and inspire runts everywhere.

(As the first Americans to medal in their events since the 1960s, Rupp and Manzano also demolished the racist theory -- promulgated most notoriously in a 1992 Runner’s World cover story titled “White Men Can’t Run” -- that Africans are genetically superior distance runners.)

That the Olympics now invite women to participate in sports that were once considered unladylike -- boxing, wrestling and weightlifting -- has expanded the range of body types we can cheer for. (If a lady can lift 412 pounds over her head, as Jang-mi Ran of South Korea did, then it’s not unladylike.) Of course, on top of the competition for gold medals, there’s a meta-competition for sponsorships and endorsements. The athletes who best combine athleticism and traditional good looks -- such as Lolo Jones and Ryan Lochte -- still win that one. I’m not so ignorant of human nature as to think that Robles will now get that swimwear contract, or that Manzano will inspire football players to go out for cross country. But maybe the success of those athletes will prevent a big-boned girl from starving herself toward a shape she wasn’t born to have, or convince a short dude that his height is no barrier to success in life. To return to what my pastor said on Sunday, we all have to learn to appreciate the bodies God gave us. The Olympics show us that whatever those bodies look like, they’re good for something golden.