After flubbing the relay for three straight Games, the American women get it right -- and in stunning record time 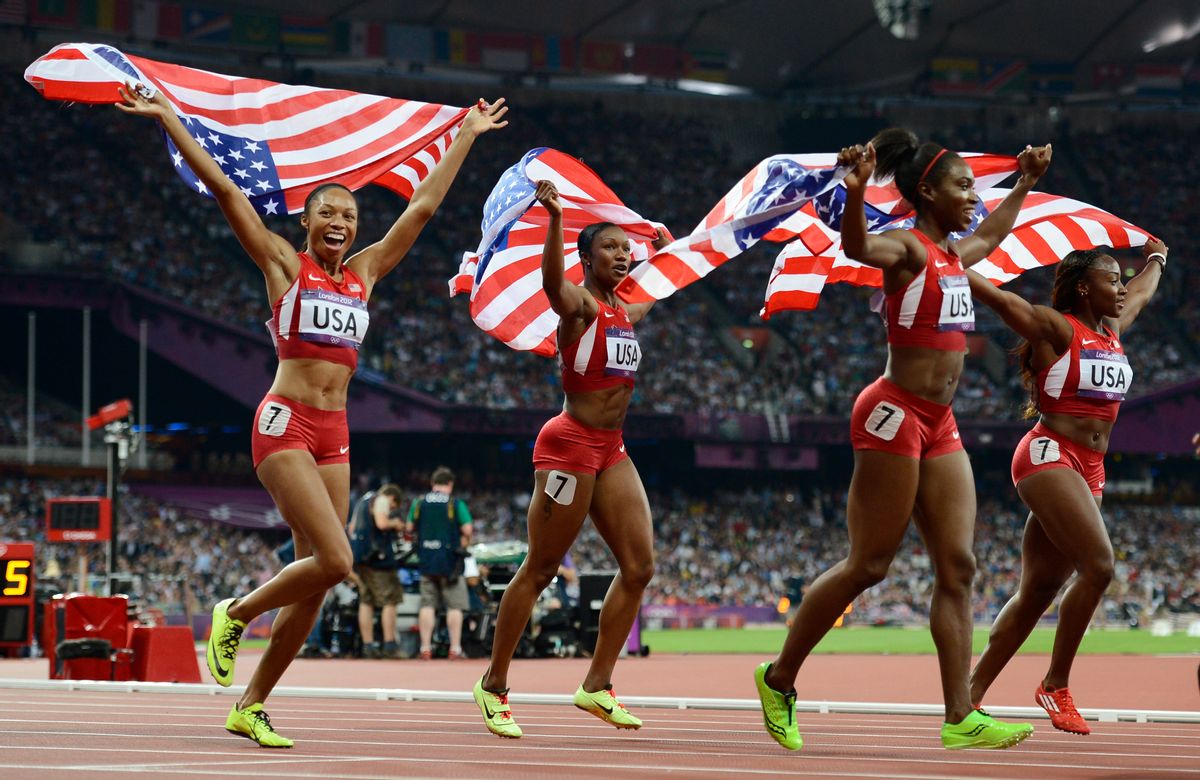 The baton that gets passed from runner to a runner during a 4x100 relay race is made of wood and weighs a little more than 2 and a half pounds – or about the same as a quart of milk. In Sydney in 2000, Athens 2004 and Beijing 2008, that weight was too great.

In Sydney, the American team, anchored by gold medalist Marion Jones, only took a bronze after a very poor exchange between Torri Edwards and Nanceen Perry.

In Athens, Lauryn Williams, who had already won a silver in the 100m, botched an exchange on the final leg, and the American women failed to medal. Four years later in Beijing, the U.S. didn’t make it to the finals when Edwards and Williams couldn’t connect in the semifinal.

Those of us who watch the Olympics without closely following these sports in the intervening four years tend to come away with a sense of the inevitability of records falling, and for the most part that’s true. But the sports whose records take the longest to fall are the ones that demand a combination of athleticism and teamwork.

Friday, the U.S. women’s relay team – Tianna Madison, who ran the opening leg; Allyson Felix; Bianca Knight; and closer Carmelita Jeter – set a new world record of 40.82 for the 4x100. The previous mark, set by the East German team in October 1985, was 41.37.  At the time that record was set, Madison was a month old, Felix and Knight weren’t born, and Jeter was five. No record broken at this year’s track and field events had stood longer.

It wasn’t that the American women in Sydney, Athens or Beijing weren’t fast enough to break that record; it was that in successive Olympics they screwed up the handoff of that hollow wooden tube.

What was the difference between utter frustration and golden glory? “Just a little bit of teamwork,” said Jeter after yesterday’s victory. “I just knew if we had clean baton passes that we would definitely challenge the world record.  Smash it like we did? We had no idea, but I knew it was in us.”

That they had it in them to smash the record and beat those incredible Jamaican women – 100m champions Shelly-Ann Fraser-Pryce, 100m bronze medalist Veronica Campbell-Brown, Sherone Simpson and Kerron Stewart finished in 41.41 – was something else again. They did both. I can’t swear to this, but it appeared to me that the fraction of a second that our women won by was gained by smoother transitions on the handoffs. Let’s give them all a hand for the one they gave each other.

Watching the U.S. men’s basketball team beat Argentina 109-83, I couldn’t help but think of what fans from predominantly soccer nations used to say about Americans some 30 or so years ago: We try to make up in muscle what we lack in finesse. Not that Argentina's team played as brutal a style as the French – the first squad since the '80s video game Arch-Rivals to combine the sports of basketball and judo. But Argentina was still remarkably strong, especially when making cannonball-like leaps at the basket.

The Americans, of course, were bigger and stronger, but it was obvious on several occasions that they weren’t going to contest Argentina when they drove to the boards.

This was, I’m sure, because there was no need to. After the first quarter Kobe, Kevin and LeBron were never threatened and looked as if they could have won by 30 or more if necessary. But it was also due in part, I think, to the fact that nobody wanted to risk his multi-year NBA contract on an injury he got playing somebody in England.

Anyway, it did look kind of strange with the tall guys all playing on the periphery and the short guys on the inside. Team USA scored just under half its points on 18 three-pointers. It will be interesting to see if they can maintain that strategy against Spain – led by the Gasol brothers  and  Juan Carlos Navarro -- on Sunday.

My vote for the coolest Olympic moment was when LeBron James and Carmelo Anthony were warming up with Kerri Walsh and Misty May-Treanor before their gold medal match on Wednesday. Some British journalist asked LeBron if he might considering taking up beach volleyball as a sport, to which LBJ replied, “I could get used to it.”  If LeBron wants to go for the gold in another sport in Rio, can you imagine? Who is going to try and match up with LeBron at the net when going up for a spike?