Meet the Democrat who wants to defeat the GOP's craziest congressman 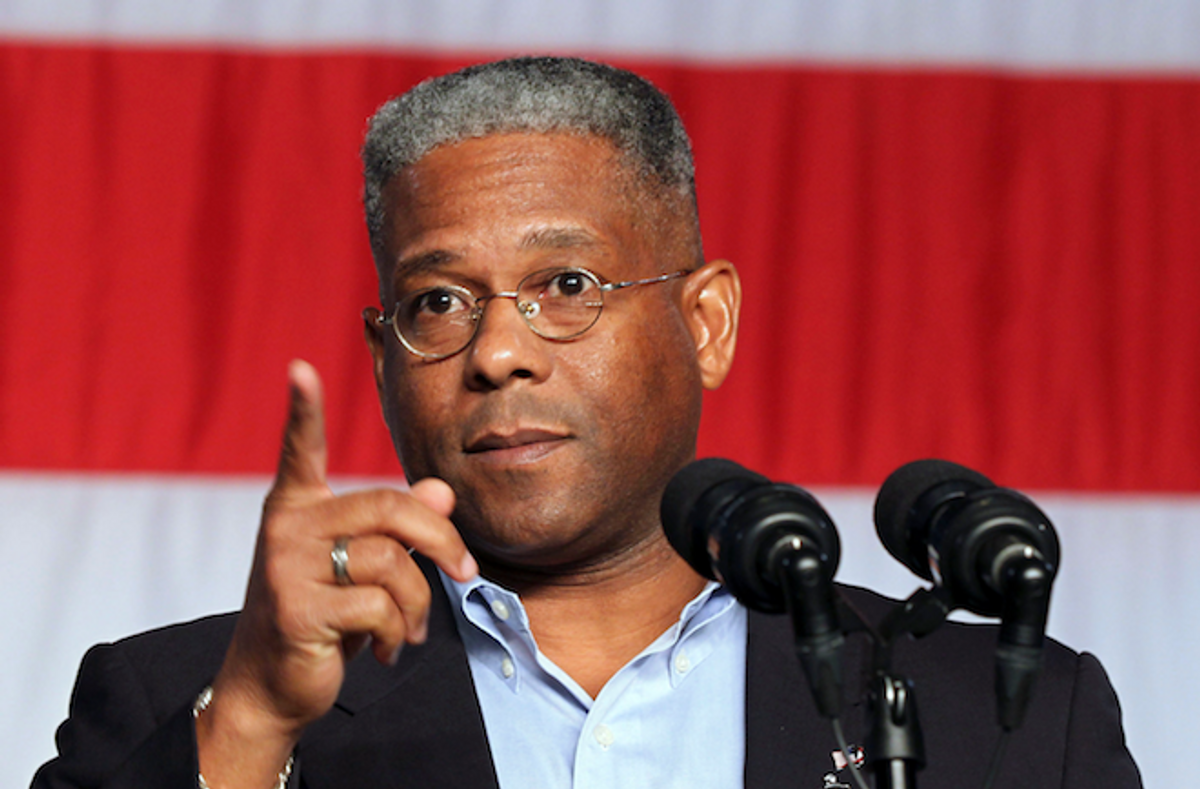 Allen West speaks at a rally for employees from Pratt & Whitney and Sikorsky in West Palm Beach, Fla. (REUTERS/Robert Sullivan)
--

Florida Rep. Allen West is one of the country's most outspoken politicians, beloved by the Tea Party and loathed by the left for his brand of vitriolic and sometimes offensive rhetoric. Businessman Patrick Murphy recently won the Democratic primary in West's district and will face him in November. Though an incumbent, West is running in a new district, which he switched to after redistricting made his old seat more Democratic. Murphy followed him to the new battleground, the 18th.

So you're new to politics after working in the private sector for a long time. Why get involved now?

I guess it started when I worked at Deloitte & Touche as an auditor. I dealt with Sarbanes Oxley quite a bit, so my eyes were opened quickly to where the government could do a better job. Then I left Deloitte to start an environmental company called Coastal Environmental, and spent about six months in the Gulf of Mexico cleaning up after the BP oil spill. And again I saw where I thought the government could do a better job. A lot of the regulations in place on these oil rigs and the safety requirements are regulations from the '70s, when we were drilling in 100 feet of water and now we’re in 6,000 feet of water.

And I got frustrated. I was sort of pointing a finger at the government and thought we could do a much better job, and I started looking at who we’re sending to Congress. Simultaneously, the Tea Party started getting momentum, and when it started it was fiscal responsibility, and I agree with that. But then it started taking off on this social agenda. It took on this right-wing agenda filled with fear-mongering, hatred and aggression toward women, toward the poor, toward the LGBT community.

And people like Allen West calling the president the dumbest man in the country, or calling Debbie Wasserman Schultz a vile lady, calling congressmen communists, you name it, there’s no way to get things done. In my opinion, we need to find some common ground and get over the partisanship in this country, because that’s killing us. And someone like Allen West will never do that. So I said, enough’s enough, I’m not going to sit back. I don’t want to be sitting on my couch next January watching some dysfunctional congressional debate and wondering what I could have done to do something about it. Do you get the sense that people in the district are fed up with West’s rhetoric? Is it even something that’s on their mind?

Yeah, big time. So, when he moved districts, we didn’t know how well known he was in the new district or what people thought of him. But I found out very quickly, in the new district, walking around to non-partisan events -- a fair, a parade, a supermarket, whatever it may be -- asking people if they know Allen West, and inevitably, the first thing that comes out of their mouth is, “Oh, is that the crazy guy from Ft. Lauderdale?” That’s sort of the common response. They might not know his votes, they might not be able to quote him, but he has certainly framed himself as the crazy guy. A self-proclaimed “right-wing extremist,” so we’re not putting words in his mouth. My campaign doesn't need to spin anything he's said.

Have you gotten much attention nationally yet, considering how big West’s profile is?

I was in a contested primary for the first year of the campaign, so a lot of people have been on the sidelines, especially the D.C. money, the members [of Congress], the PACs and all that sort of thing. National givers, even the Netroots were waiting to see what would happen in the primary. But all that changed; we have seen an increased flow in traffic very recently. I wish I could say the money is flowing in, but it’s not like that. We are continually on the phones, continually working it, trying to tell people about the campaign and reminding them about Allen West. And reminding people, a lot of people don't realize this, but this is a Democratic-performing seat. You know, Obama won here with 52 percent of the vote, so the votes are there. It’s really just about getting our message out there and letting people know there’s an alternative.

Are you meeting your benchmarks? Feeling confident?

Yeah, I think we’re doing very well. There was a poll conducted several weeks ago and I fully expected to be down, maybe double digits, just because I don’t have the name ID of Allen West and this is a new district. So we did the poll and, my gosh, it came back and we were tied 45-45. Allen West was actually polling a week before us and didn’t release his numbers, which is a pretty good indication that our results were pretty accurate.

Since that time, his commercials have started to hit the airwaves. I don’t know if you’ve seen them, but he’s doing everything he can to move to the center, to be Mr. Nice Guy. He starts it off by saying he was a teacher and we should focus on education. Meanwhile, the real story there is that he taught for nine months. He apparently was swung on by a student and left teaching because he said he’d rather be in Afghanistan fighting than teaching our students. But he went on to say recently that student loans are a page out of the communist manifesto -- so it’s kind of interesting for him to say he’s Mr. Educator.

So you think he’s worried?

Yes, no doubt about it. He’s running to the center. He’s trying to rebrand himself as quick as he can.

I always wonder with these guys, do you think he actually believes all the stuff that he says, or is he just playing to the base?

I go back and forth on that one. I can’t figure it out. Half the time I believe that he’s saying it because he really believes it. But then I think, he can’t possibly believe that. He must be doing it to raise money. You know, 90 percent of his fundraising comes from outside of the state -- 99 percent comes from outside of the district. So he is appealing to the Tea Party across the country.