Modern life is killing us

Long hours, crazy commutes, urban pressures -- suddenly our cities are bringing us down 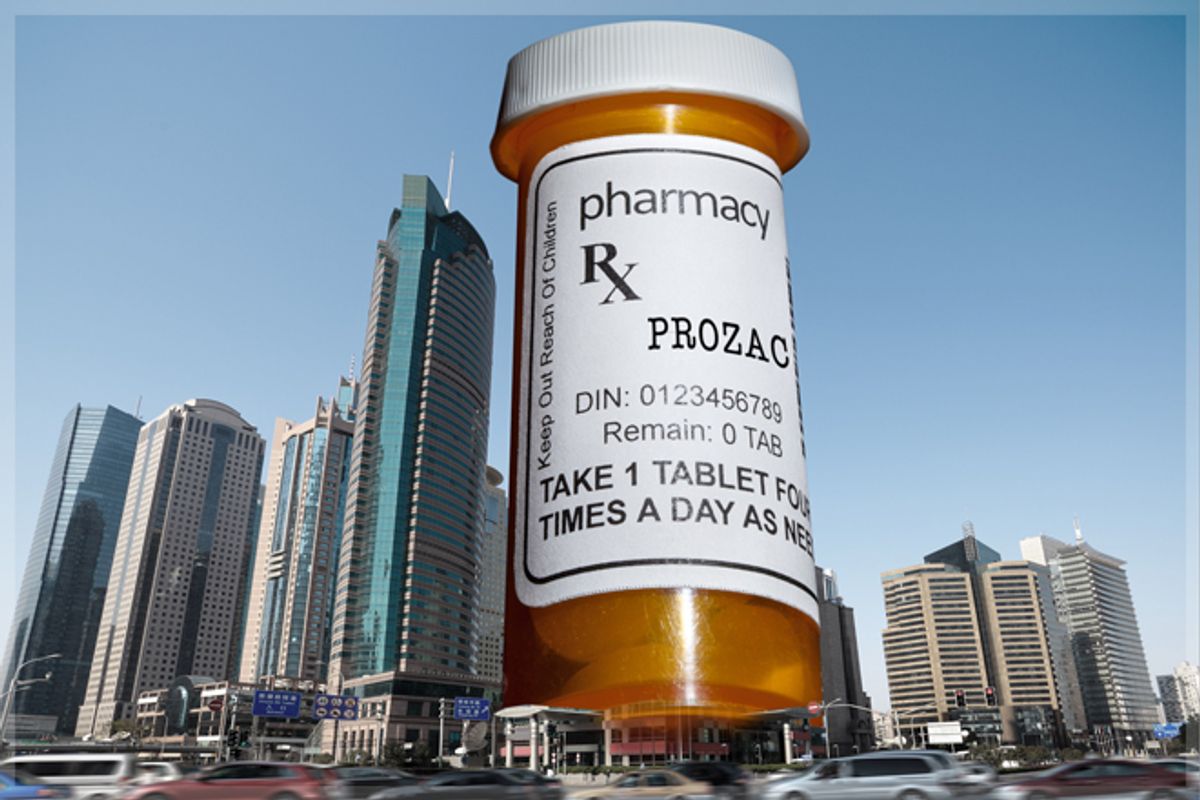 Remember all that buzz about how the length of your commute affects your happiness? "A person with a one-hour commute has to earn 40 percent more money to be as satisfied with life as someone who walks to the office," wrote Jonah Lehrer, God rest his soul, in 2010. (Can probably assume that wasn't a Bob Dylan quote!) Turns out going to work not only stinks, it leaves psychological scars.

The studies were treated as a revelation, but why? We're all well aware that our surroundings -- maniacal bosses, dreary weather, cable news -- mess with our heads. And yet, we haven't historically made mental well-being a lodestar when it comes to urban design. "We're at the point where we're just getting people to think about the mental health implications of the urban environment," says Lynn Todman.

Todman, an urban planner, is the principal investigator behind a new report that establishes a Mental Health Impact Assessment for her field. To be presented at a conference in Chicago next month called "The Social Determinants of Urban Mental Health," the MHIA will codify ways that cities can build for happier, mentally healthier residents.

For years, cities have conducted Health Impact Assessments (minus the "Mental") to make sure developments and infrastructure decisions don't harm residents' physical health. "But almost never something like depression or ADHD," says Todman. Which is odd, when you think about how much energy is expended correcting mental health problems, and how those problems come back to haunt cities.

Often in unexpected ways. The circuitous link between physical environment and psychological well-being is complex enough that it can't always be solved by simply adding "restorative" green space. "Food deserts have implications for more than obesity rates. What we're learning now is that nutritional content is associated with aggressive behaviors and problems at school," says Todman. "We've learned that when a child grows up in a distressed neighborhood, her stress hormones are chronically elevated, which is correlated with early menarche, which makes her predisposed to early pregnancy."

That's not to say green space isn't important, of course; the impact of parks on urban mental health is well documented, and poor neighborhoods do tend to have fewer of them. But conditions like blight and crime can be an even bigger factor. A 2005 study of low-income African-American outpatients at a mental health clinic in Atlanta found 43 percent met the criteria for PTSD, which is less shocking when you consider that 83 percent of them had experienced some form of "severe trauma," like a "potentially lethal attack" or a sexual assault.

The psych community has worked hard to expand mental health services to people in such neighborhoods. But even as access has expanded, the depth of treatment has thinned. "If you're talking about the population of individuals with less severe disorders, like anxiety and depression as opposed to schizophrenia or bipolar, more low-income people are receiving treatment than before. But the treatment they're receiving is rather shallow, and a lot of it is oriented around medication and delivered through primary care," says Mark Olfson, a professor of clinical psychiatry at Columbia University who tracks mental health services.

A study by Olfson found that while the number of people being treated for depression rose by 2 million between 1998 and 2007, the number of people actually sitting down with a therapist declined dramatically -- especially in groups with less money and schooling: "individuals of Hispanic ancestry, adults with 12 or fewer ... years of education, Medicaid beneficiaries, and unemployed adults." (African-American psychotherapy rates declined too, but only by a couple of percent, perhaps because they were already substantially lower than average.)

Money can explain a lot of this -- limited-coverage insurance plans encourage patients to get some pills from their primary care doctor rather than sit down with a therapist week after week. But another piece of the puzzle is cultural. Jooyoung Lee, an assistant sociology professor at the University of Toronto, has been studying how gunshot victims in inner-city Philadelphia interact with the mental health care system.

"Many people in these communities don't view having a therapist as something normal people do," says Lee. "They'll say, 'What's it like?' And you say, 'Well, they'll start by asking you some personal information.' And they'll say, 'What kind of personal information? I don't want to tell some stranger what I do.' A lot of them just find the whole process so foreign. One guy told me he didn't want to be hypnotized."

Multiple studies have found that stigma and skepticism remain a significant barrier to low-income African-Americans and Latinos using mental health services, even free ones. One 2004 survey found that many poor African-Americans used emergency rooms to seek treatment to mask the real reason they were there. In another survey, half of low-income Latinos said depressed people aren't trustworthy and that they wouldn't socialize with them. Compare that to a 2004 survey by the American Psychological Association that showed only 20 percent of the general population says therapy is stigmatized, and that nine out of 10 would consult or recommend a mental health professional.

It points to a gulf that, just like the one that divides the American healthcare system in general, splits mental health care into two systems for two populations. On one side, there's the population living in distressed urban environments that wreak havoc on the psyche. More people on this side are receiving mental health care than in the past, but they're getting a more superficial version of it. Skepticism and stigma keep some of them away entirely.

And on the other, you have a population that's more comfortable with the mental health world than ever. Psychotherapy rates have dropped in this group too, but not as sharply, and they're rising among people with advanced degrees. And anecdotal evidence backs up the data that suggests there's less stigma or shame. "I study these communities where the stigma of going to a therapist is very high, and then I come back to UCLA or University of Toronto, and 25 percent of my students have doctor's notes saying they're depressed or have ADHD and they need an extension on something," says Lee. "The whole process is normalized for people who go to college. Every campus has an orientation where they tell you about the mental health center. If you come of age in that context, it's normal."

Lee recently blogged about his experiences with gunshot victims who displayed signs of PTSD but didn't feel comfortable utilizing Philadelphia's free mental health services. But when Lee visited them at their homes, they talked more openly. "I feel like the home setting is a very safe space," says Lee. "A couple of the victims told me they felt like if they went somewhere else they were on someone else's turf." One young man who'd been reluctant to see a therapist poured his heart out to Lee while they sat on his couch and watched "Game of Thrones."

But more effective services, as Lynn Todman believes, is only half the puzzle. The other half is creating cities that contribute to fewer mental health problems in the first place. "It should be bidirectional," says Todman. "We've been looking at it from only one direction for too long. You can get people services, but if you send them back into a toxic urban environment they're going to get sick again."

Is a Mental Health Impact Assessment the best way to combat that? With so much bureaucracy already in place to impede development, a reluctance to add another layer -- what would essentially be an Environmental Impact Statement for our brains -- is understandable. At the same time, however, some kind of standardized assessment tool for evaluating projects' mental impacts might have prevented some of the urban renewal debacles of the past. "The brain," says Todman, "is the only organ that can process the social environment." Building with it in mind makes sense.