Paul Ryan: Careful what you wish for 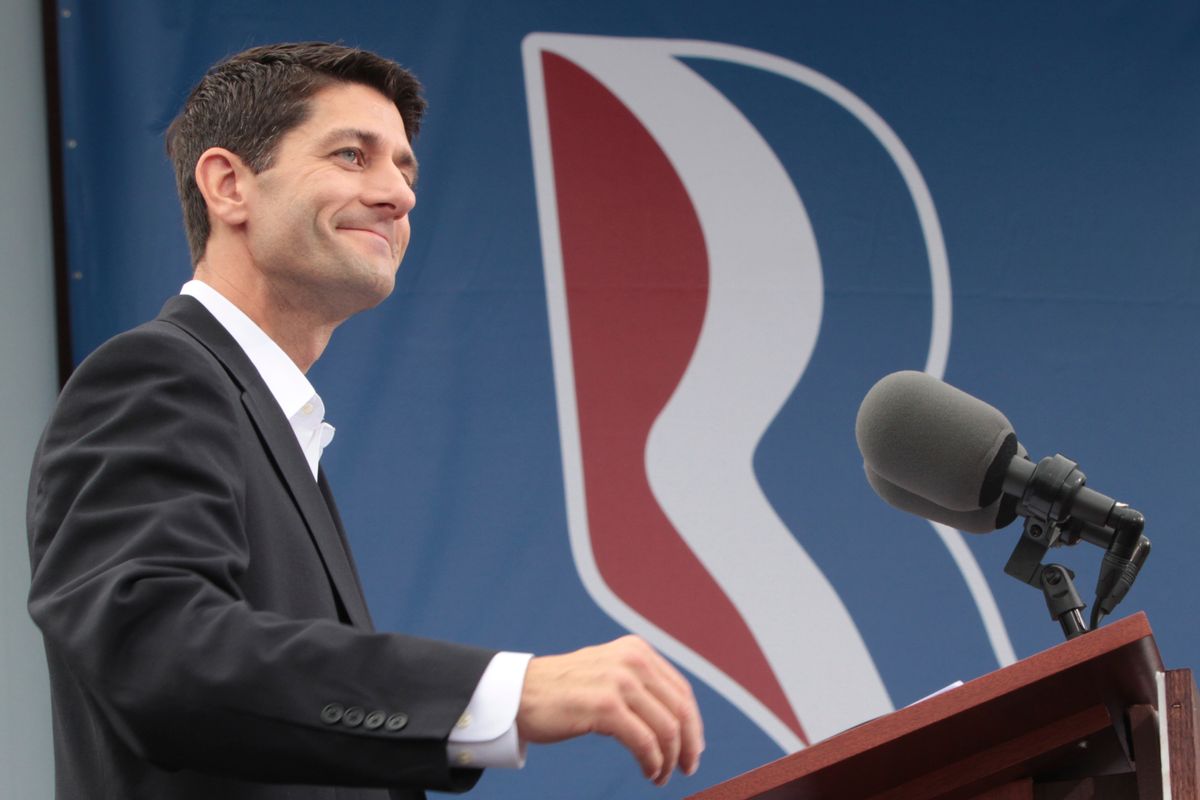 Mitt Romney's choice of Paul Ryan as his nominee for vice president achieved something remarkable in the modern history of U.S. presidential elections. He made both sides ecstatic. Conservatives are in a state of euphoria -- Ryan, despite his many deficit-expanding votes during the Bush administration, is a true believer's true believer. Every doubt that conservatives have about Romney is matched by the faith that they place in Ryan. Romney, amazingly, just made himself the Potemkin figurehead of his own administration.

But liberals likewise profess themselves enthused. Medicare is back on the menu, boys! Now there's just no way Romney will be able to run away and hide from the draconian, social welfare-slashing Ryan budget. A million senior-scaring attack ads are likely already in production; Florida has a brand-new boogeyman.  Some pundits are boldly calling the choice a Hail Mary act of desperation; only someone watching the election slip away would hand such a golden opportunity to his opponents.

But before liberals start cheering too hard, they might want to think this through. If the Romney-Ryan team wins, a future in which Paul Ryan eventually becomes president of the United States becomes more likely than not. That's a future in which the New Deal is repealed. So be careful what you wish for.

You know who the real winners are? Wonks! Back in 2008, wonks had a field day comparing the merits of Obama's (no mandate) and Hillary Clinton's (yes mandate) healthcare plans. But ever since Romney secured the Republican nomination, it's been a wonk nightmare. There's no there there in his policy proposals, no numbers to crunch, no planks in his platform. But now we've got the Ryan plan to crank on. We've got details! Sure, they might be details that poll horribly when explained to the average voter, but they invite serious engagement nonetheless. Get used to it -- because we're all going to be getting up to speed on the cost-benefit analysis of Medicare vouchers lickety-split.

Because, crazily, that's what this "choice" election just became about. Voucher math. Rising healthcare costs are the real budget buster. Say what you will about how the math of the Ryan budget seems peculiar (lower taxes, raise defense spending, slash the most popular government safety net programs -- really?) but the Wisconsin representative does strive to address this fundamental driver of our burgeoning  national debt. Instead of having the government tackle the challenge of lowering healthcare costs directly, Ryan wants to outsource that responsibility to the users.

The notion is attractive to libertarians and depends on an efficiently working free market. Instead of having Medicare or Medicaid simply pay your bills, you'll get a voucher that you can spend yourself. The theory is that if we are spending our "own" money we'll be more careful in picking  and choosing the healthcare services we need. Similarly, the providers of those services will be forced to compete for our precious dollars, so they'll have to lower their prices or deliver them more efficiently. The invisible hand will, so the theory goes, bring down the cost of getting that MRI. Hey, it works for fast food delivery and private car hire service in Brooklyn, so why not for healthcare?

Of course, before massively reworking a program that millions of Americans depend on, it would be nice if Ryan could point to an example where vouchers have been tested on a large scale. Unfortunately, no other rich developed country has tried anything like Ryan's system. And there's a pretty good reason for that -- healthcare is not like other markets. When you're dying of cancer, you don't look for that low-cost solution to your medical needs; you want the solution that gives you the best chance of survival, or any chance of survival. You want that extra CAT scan. And if you are the person responsible for making medical decisions for your loved one, you're not inclined to scrimp and save.

The providers of healthcare services have us over the barrel in situations where we or our loved ones are in life-threatening medical circumstances. When the alternative to not paying is death, we will pay. And if we don't have enough to cover the costs, those costs aren't guaranteed to come down. So people will die.

Civilized countries find this repugnant. Civilized countries also understand that the government has huge leverage to force lower costs, should it choose to use its power. The most disgusting part of the Medicare Part D drug prescription benefit (which Paul Ryan voted for, by the way) was not that there was no funding mechanism included with it, but that the federal government was explicitly forbidden from using its immense buying power to negotiate lower prices from the drug companies.

A boring campaign just became really interesting. Red states may well get even redder for Romney as a result of the Ryan pick. The base loves the notion of itself as "anti-nanny state." But in states like Florida, seniors are going to take a long hard look at voucher math. If they don't like what they see, Florida may well move directly into Obama's win column, and that, in turn, could easily decide the election.

Reason for liberals to be excited, for sure. Except if Romney wins, because then it will be very difficult to argue that the nation didn't make a meaningful choice.