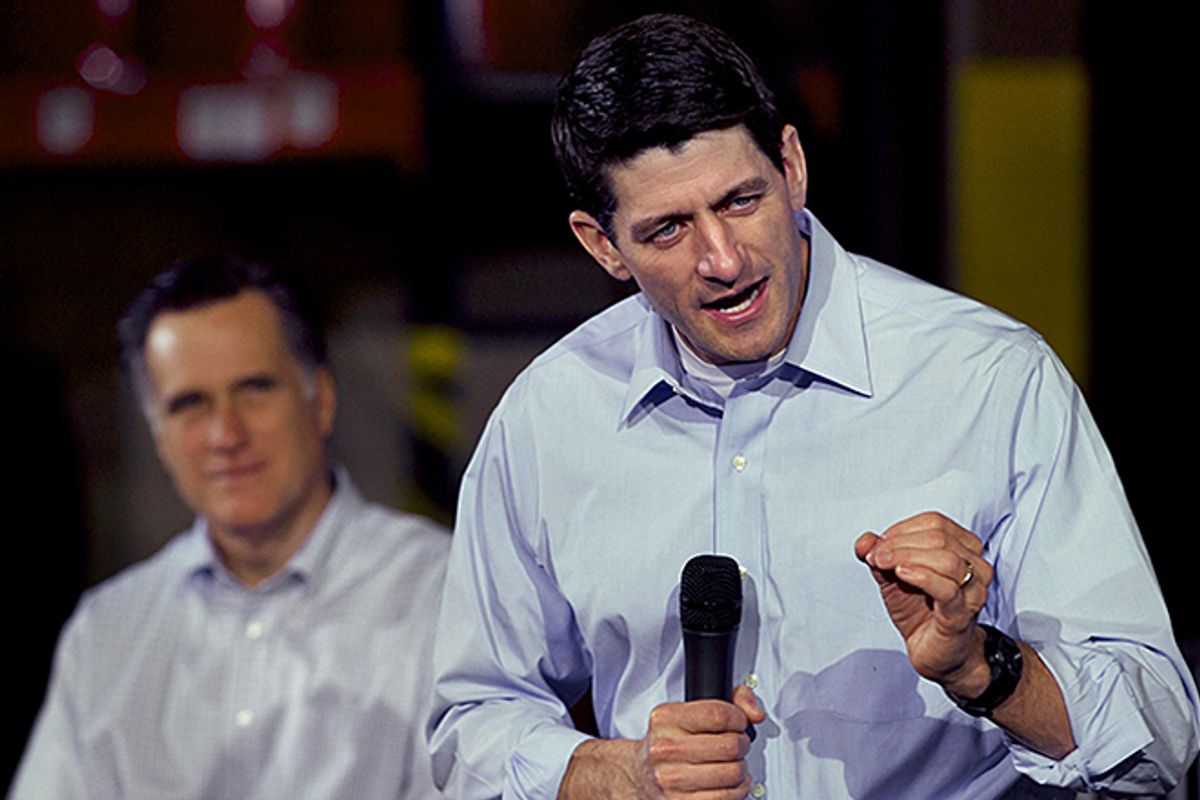 So it’s Romney-Ryan. At least the ticket has a nice, alliterative ring to it.

But what does Mitt’s pick of Wisconsin Rep. Paul Ryan, the boy wonder of national Republican politics, mean?  Here are five things the pick tells us about Romney, the status and future of the GOP, and what to expect from the remainder of the 2012 presidential election:

1. Romney is doubling down on his five-year, play-it-safe strategy to win the nomination and possibly the presidency.

If nothing else, Romney is a smart-money player. His failed run of 2008 was a wise, learning-curve precursor to his successful 2012 capture of the Republican nomination, which he proceeded to win through attrition by presenting himself as the most serious, best funded and most organized choice among a field of kooks, has-beens and also-rans.

Picking Ryan, a white male the party’s base loves, will be cast as a dynamic and bold pick by some on the right, and a foolhardy gambit by some on the left. The decision is neither: It’s the smart and safe play — the choice of an investor, not a gambler. And that is Mitt Romney’s personality writ large politically.

Following the fallout from the Sarah Palin disaster — empirically demonstrated by political scientists Richard Johnston and Emily Thorson to be one of the most ruinous veep picks in presidential election history — Romney, whose three finalists were all white men, darn sure wasn’t going to opt for another racial or gender minority or Hail Mary-like selection. (Sorry, Marco Rubio.)

The differences between the so-called Obama surge electorate of 2008 (younger, less white, less affluent, and more first-time voters) and the 2010 “Obama backlash” electorate of 2010 (older, more white, more affluent, fewer first-timers) are dramatic and have yielded Washington’s divided government. If nothing else, the efforts by ALEC-funded state Republicans to enact voter ID and related restrictions on the ballot on the ballot testify to the fact that the GOP knows it can only win presidential elections — they’ve lost the popular vote in four of the past five, let’s not forget — if the composite electorate looks more “congressional,” which is to say it more closely resembles John McCain than Barack Obama. Ryan is a white male and although he’s young (just 42), in political dog years he is an old soul.

That said, the Romney camp clearly believes that a base-mobilizing strategy, rather than a swing voter-conversion strategy, is its best chance to win the White House. Given recent polls showing the former Massachusetts governor’s rising problems with independents and undecideds, the smart-money play for Romney is to appeal to and ultimately rely upon the base by picking somebody whose ideals appeal to the party’s suddenly austere, anti-entitlement, white-male-dominated crowd. As echoed by Ryan in his acceptance speech, that crowd subscribes to the fantasy that every American is born with the same chance of attaining the American dream, something far less true today in the United States than when Ryan, the first Baby Buster on a major-party national ticket, was born in 1970.

3. Romney’s capitulation to the Republican Party’s conservative, plutocratic base is now complete.

Suffering from persistent attacks about his wealth, how he made it, and what taxes (if any) he has paid on it, you’d think Romney might take any opportunity to transform himself from the mustachioed banker on the Monopoly board into a Joe-the-Plumber advocate for the middle classes, right? If you harbored any residual doubts Romney might use the veep pick to do so, you were wrong.

Ryan is the Republican in Congress most directly associated with both George W. Bush’s failed Social Security privatization agenda of 2005, which was wildly unpopular. He is the author and champion of the Romney-supported and also highly unpopular budget plan that would, if enacted without amendment, deconstruct the very popular Medicare program. In short, Ryan is a Koch Republican, an economic anti-populist of the highest order. Picking him confirms Romney’s obeisance to the prevailing conservative mind-set on both fiscal policy and entitlement politics. As the American Prospect’s Jamelle Bouie aptly puts it, “It’s hard to escape the impression that conservatives view Ryan as a consolation prize for the fact that their best chance for rolling back the welfare state resides in the former Massachusetts governor who gave Democrats the blueprint for Obamacare.”

By picking him, Romney provides a powerful signal that he is willing to counter Obama’s failed attempt to unite America with an unapologetic attempt to win via econo-demographic, divide-and-conquer politics. Don’t be surprised if the Romney-Ryan ticket engages in the sort of racially tinged, generationally loaded entitlement politics practiced by the Tea Party and the Romney campaign already, what with its very controversial welfare-themed attack ad on Obama.

4. The GOP’s national security wing is in near-total disrepair. (But so what? This election is all about Obama and economic performance anyway.)

Like the man who picked him, Ryan is a domestic, economics and fiscal policy guy. In terms of foreign policy interest or background, the 2012 ticket has no McCain, no Dick Cheney, no George H.W. Bush, no Ronald Reagan and certainly no Richard Nixon. That may generate sighs of relief from many Americans, given some of the foreign policy ideas and military decisions advocated by those earlier presidential or vice-presidential nominees. But whatever their respective successes or failures, at least one candidate on every GOP presidential ticket during the past half-century could boast at least some foreign policy, diplomatic or defense chops.

That tradition abruptly ended when Romney — whom Foreign Policy commentator Michael Cohen aptly describes as an “angry lightweight” on foreign affairs — picked Ryan. Chock-full of loose talk about Obama being a weak apologist abroad who doesn’t understand America’s special role in the world, there is little substance to either Romney’s foreign policy agenda or his critique of Obama’s. Romney’s “big” foreign policy speech last autumn at the Citadel was long on platitudes and short on policy vision.

To underscore the previously three points, however, in the post-neocon aftermath of George W. Bush’s presidency — not to mention at a moment when Obama’s foreign policy performance splits are better than his economic approval numbers — Romney is again playing his hand the best he can by picking Ryan, the fiscal lightning rod of the party. Romney knows his fate this November hinges almost entirely upon his economic stewardship and fiscal critiques of Obama. Any foreign policy credibility another veep pick might have brought to the ticket would hardly have mattered.

5. The national GOP is a House-dominated party.

In a forthcoming book for Yale Press about the post-Reagan congressionalization of the Republican Party, I contend that the GOP’s presidential wing has steadily lost relevance and ceded power to its congressional wing. Elsewhere, and more specifically, I’ve shown that the GOP’s current congressional caucus is perhaps the most “House-heavy” it has been since the party’s 1854 founding. So it’s no coincidence that, well before Romney tapped him, Ryan had already “captured the GOP,” to borrow New Yorker national politics correspondent Ryan Lizza’s phrase, en route emerging as his party’s leading policy voice nationally; the fact that the Wisconsin representative is now his party’s vice-presidential nominee merely ices the GOP’s congressionalization cake.

Hints of Ryan’s rise were evident as far back as the Iowa caucuses, dominated as they were by two sitting House members, a former House speaker and a former senator who lost his 2006 reelection bid by 17 points. Yes, Romney eked out a virtual tie with said former senator, Rick Santorum, in the statewide popular vote. But those four congressional wing candidates — Santorum, plus Ron Paul, Newt Gingrich and Michele Bachmann — combined to attract nearly two-thirds of all votes of all votes cast by Iowa Republicans last January.

Like its foreign policy wing, and relatedly so, the GOP’s presidential wing may be weaker than at any time in the past five decades. Meanwhile, the House GOP is dominant, still rising and impossible for Romney to ignore. Ryan’s selection is further proof that this institutional transformation is nearly complete.