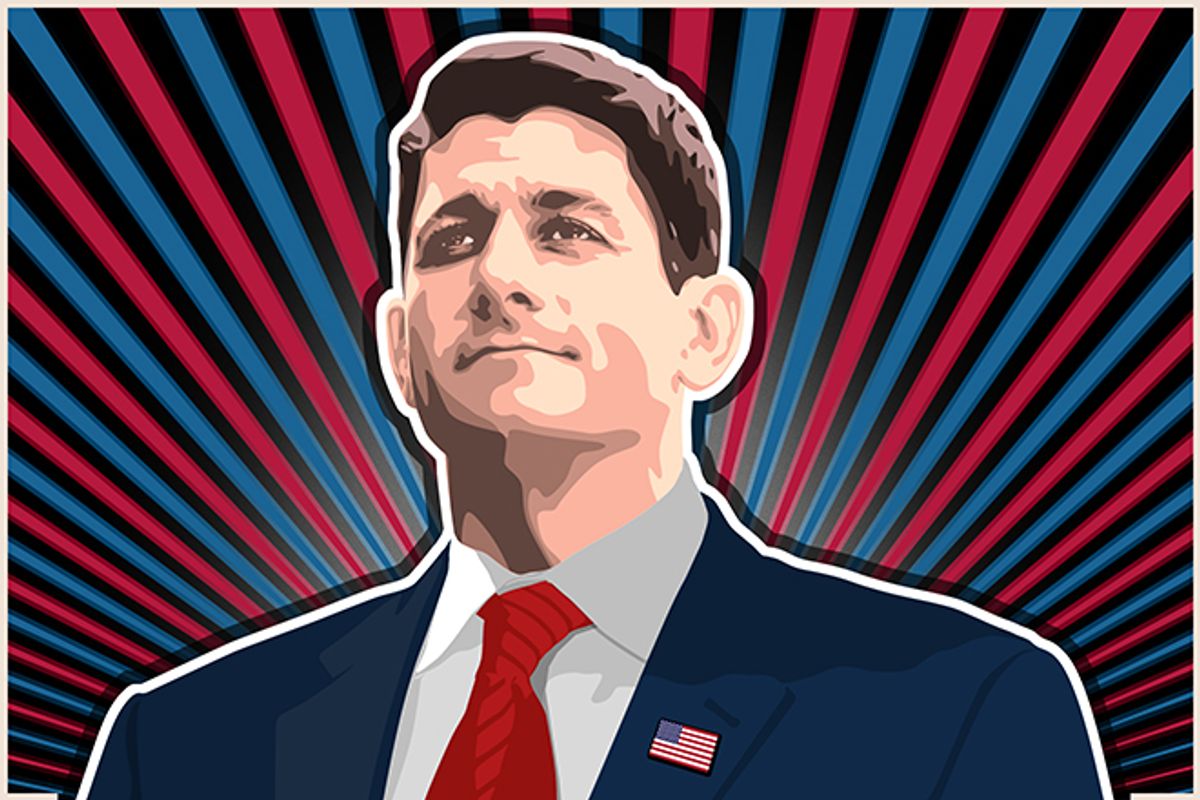 Paul Ryan was born into a well-to-do Janesville, Wisc. family, part of the so-called "Irish mafia" that's run the city's construction industry since the 19th century. When his lawyer father died young, sadly, the high-school aged Ryan received Social Security survivor benefits. But they didn't go directly to supporting his family; by his own account, he banked them for college. He went to Miami University of Ohio, paying twice as much tuition as an Ohio resident would have; the in-state University of Wisconsin system (which I attended) apparently wasn't good enough for Ryan. After his government-subsidized out-of-state education, the pride of Janesville left college and went to work for government, where he's spent his entire career, first serving Republican legislators and then in his own Congressional seat, with occasional stints at his family-owned construction business when he needed a job (reportedly he also drove an Oscar Mayer Wiener Mobile for a while).

Ironically, Ryan came to national attention trying to dismantle the very program that helped him go to the college of his choice, pushing an even more radical version of President Bush's Social Security privatization plan, which failed. He has since become the scourge of the welfare state, a man wholly supported by government who preaches against the evils of government support. He could be the poster boy for President Obama's supposedly controversial oration about how we all owe our success to some combination of our own hard work, family backing and government support. Let's say it together: You didn't build that career by yourself, Congressman Ryan.

Thus Paul Ryan represents the fakery at the heart of the Republican project today. It starts with the contradiction that Mr. Free Enterprise has spent his life in the bosom of government, enjoying the added protection of wingnut welfare benefactors like the Koch brothers. If Herman Cain is Charles and David Koch's "brother from another mother," as he famously joked, Ryan is the fourth Koch, swaddled in support from Americans for Prosperity and other Koch fronts. The man who wants to make the world safe for swashbuckling, risk-taking capitalists hasn't spent a day at economic risk in his entire life.

The other component of GOP fakery Ryan exemplifies is the notion that a pampered scion of a construction empire who has spent his life supported by government somehow represents the "white working class," by virtue of the demographics of his gradually gerrymandered blue collar district. I write about this in my book: guys like Ryan (and his Irish Catholic GOP confrere Pat Buchanan) somehow become the political face of the white working class when they never spent a day in that class in their life. Their only tether to it is their remarkable ability to tap into the economic anxiety of working class whites and steer it toward paranoia that their troubles are the fault of "other" people – the slackers and the moochers, Ayn Rand's famous "parasites." Since the '60s, those parasites are most frequently understood to be African American or Latino – but they're always understood to be the "lesser-than" folks, morally, intellectually and genetically weaker than the rest of us.

Today, though, the "parasites" Republicans rail against also happen to be white. Ryan's intellectual soulmate Charles Murray, of course, has shown that the struggling white working class is now besieged by the same bad morals that dragged down African Americans – laziness, promiscuity and a preference for welfare over work. Ryan himself rails against the "takers" who are living off the "makers." And while in the realm of dog whistle politics, many Republicans hope working class whites still see the takers as "other," in fact, Ryan's definition of "taker" includes much of the GOP base. It's up to Democrats to make that plain to the electorate.

Ryan's selection by Mitt Romney is a huge gift to Barack Obama and Joe Biden – and to the country. This is a clear electoral choice, with the potential for a rousing debate about the future of our country. Romney has spent two years refusing to tell us what he'd do as president. He's literally said on more than one occasion that he won't reveal his plans for specific program cuts, because if he did, people might not vote for him. But now he's tied to a guy who's revealed his pro-plutocrat agenda in bloody detail. What Obama this week called "Romneyhood" – Robin Hood in reverse, taking from the poor and giving to the rich – is best described as "Ryanhood." Ryan's budget is so devastating to the poor and middle class that it earned him a rebuke from the nation's Catholic Bishops, the first time in memory they've entered politics for any reason but to deny women freedom and promote Republicans.

Yet Ryan's polarizing persona isn't merely a matter of his budget details, it's his entire approach to public life. He's making his career on that Ayn Randian conflict between "the takers and the makers." In a recent interview Ryan previewed gems from what seems to be the core of his stump speech, judging from his appearances today. But he laid out what the 2012 GOP race is about, in a longer peroration on makers and takers:

We risk hitting a tipping point in our society where we have more takers than makers … President Obama's policies are feverishly putting more people in the column of being takers than makers. We're going to either have a taker society or a maker society. The president is trying to create more of a permanent class of government dependents.

In the 70s, of course, Ryan's GOP won over the white working class with these sorts of anti-welfare appeals, and at the time it was understood that the takers weren't white. The toughest issue for today's GOP is that increasingly, government takers are white; many are white seniors, the core of the GOP base. I've written before about Dartmouth political scientist Dean Lacy's work showing that the more federal money a county receives, the more likely it is to vote Republican. That money might not be merely food stamps or temporary aid for needy families; it might also be crop subsidies, housing payments, Medicaid and even military spending, along with the wildly popular Medicare and Social Security.

Traditionally, Republicans have protected that kind of government spending while trying to slash money for the "undeserving poor," but Ryan wants to cut all of it (except military spending). So much of the Republican base, Lacy says, has "the luxury of voting on social issues knowing that these federal spending programs will be kept in place." But not anymore. That's what Ryan brings to the GOP ticket – and the gift he gives to the Democratic ticket.

By the way, it's a gift that will be immediately returned if the rumors that President Obama plans to name Erskine Bowles his new Treasury Secretary are true. Ryan was a Simpson-Bowles Commission member, though he eventually voted against its entitlement cutting because it also recommended tax increases. Bowles' deficit-cutting fetishism is exactly what keeps the Democratic Party from offering a clear alternative to the GOP. Ryan's addition to the GOP ticket makes the choice between Republicans and Democrats crystal clear. As long as Democrats remember that they're Democrats.

(An earlier version of this piece stated that Miami University of Ohio was a private institution. It is a public university that Ryan attended as an out-of-state student from Wisconsin.)