"Run for your life," the American star thought. But against Usain Bolt, he was running for silver 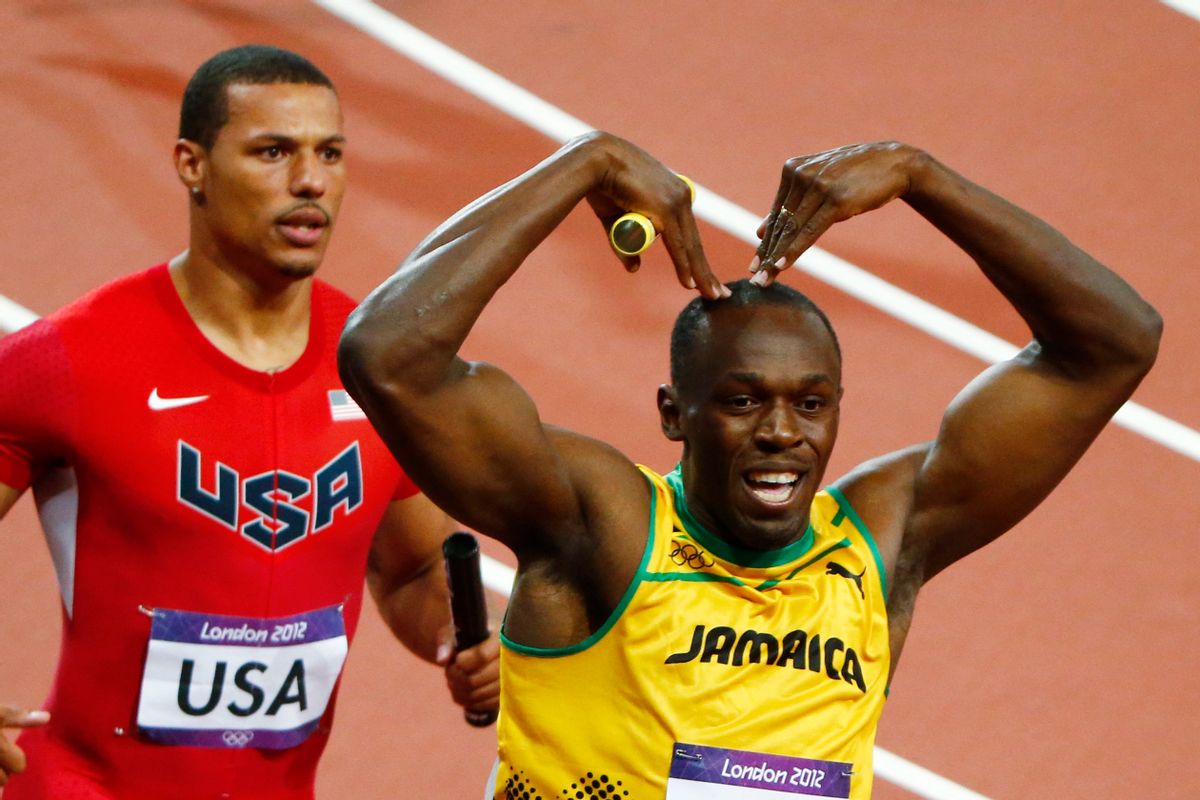 Jamaica's Usain Bolt celebrates after he won gold ahead of Ryan Bailey of the U.S. in the men's 4x100m relay final at the London 2012 Olympic Games at the Olympic Stadium August 11, 2012. The Jamaican team set a new world record of 36.84 seconds. REUTERS/David Gray (BRITAIN - Tags: OLYMPICS SPORT ATHLETICS) (Reuters/David Gray)
--

“If you’re a fan of the 4x100,” gushed NBC’s track commentator Tom Hammond, “this has been the greatest race ever run!” Well, it was as good as any I’ve seen, especially since it was neck-and-neck until the anchor leg, when Jamaica’s Yohan Blake passed the baton to Usain Bolt for the final stretch.

All month long the Americans had been talking about the need to improve their baton exchange, a much discussed topic since Beijing 2008, when the men’s team was disqualified during the heats for dropping their batons. This time they got it right, but it didn’t matter at all -- when one of the fastest men in the world, Ryan Bailey, took the last exchange for the Americans, he was up against Bolt. “As soon as I got the baton,” Bailey said after the race, “I was thinking: run for your life.”

The American team set a new U.S. record of 37.04; the Jamaicans set a new world record of 36.89. Beating the Americans by just about exactly the amount of time it takes Usain Bolt to turn off the lights and get in bed before the room is dark. Afterwards, Bailey said the right thing: “It was an honor to compete against him.” And of course it was. When you’re matched up against the greatest in the world, it’s because your coach and your team thinks you have the best chance of beating him.

But no one in this Olympics had a chance to beat Bolt. Not even Yohan Blake, who may be the second fastest man in the world.  Or, if not, may well be by time he runs in Rio.

Bolt, who will leave London a perfect three for three in gold medal races, “is the ultimate pusher of barriers,” Blake said. Since Blake saw his friend, competitor and teammate up closer than just about anyone else in the last four years, he can be forgiven his hyperbole. In the Olympics there is no such thing as “ultimate.” There’s always another race somewhere down the road.

Who knows? Four years from now somebody could well be calling Yohan Blake "ultimate."

The argument as to whether or not this year’s U.S. men’s basketball team is as good as the 1992 Dream Team misses the point: The real point to be made about basketball is that the rest of the world has gotten much better over the last 20 years. The world hasn’t caught up yet, but it’s gaining on the U.S..

In the men’s game, that is. American women are still two, or perhaps three, Olympics away from losing a game. In winning their 41st straight Olympic game and collecting an unmatched fifth consecutive gold medal, Team USA rolled over the French 86-50 yesterday afternoon, and you had the feeling that if they had been told they had to outscore the opposition by a 2-1 margin, they’d have done it.

All 12 players on the team scored – it was as if they were drawing straws on the sideline to see whose turn it would be next. The U.S. strategy was simply to attack on offense and attack on defense; the only French strategy seemed to pit rudeness against the three-point shot.

That said, the French played a technically perfect game with their neat, perfectly executed jump shots that looked like something out of another era – the 1950s, perhaps, suggested a male commentator. Ann Meyers, an incisive and no-nonsense analyst, was quick to reply, “You want to play in the 1950s, that’s fine.  You want to play in the 21st century, that’s fine. The U.S. team has an answer for you.”

With one day to go in the Olympics and the big match coming up in men’s basketball, Spain has just 16 medals total, and only three gold – two in sailing and one in taekwondo, of all things. I don’t think there’s a more intriguing question in world sport than why the leading sports nation of the 21st century does so poorly in the Olympics.

Spaniards have been at or near the top in tennis (Rafael Nadal won the French Open and Andy Murray trained in Spain), cycling (winning four of the six Tour de France races), golf (Sergio Garcia has been one of the world’s leading golfers for more than 10 years), soccer (World Cup, Euro 2012), basketball (their national league is easily the best in Europe if not the world) and nearly a dozen other sports ever since the government and private interests began pouring money into the development and training of athletes after Franco died.

Yet you had to look hard in this Olympics to see a Spaniard  swimming, diving, wrestling, or throwing a javelin. Despite hosting the 1992 games in Barcelona, Spain doesn’t really care all that much about Olympics sports or anything where big money isn’t involved. (They don’t seem much interested in fielding an Olympics soccer team, but you can expect them to be the favorites in the next World Cup.)

As basketball is one of the biggest international money sports, it’s not surprising that they’re assured of no worse than a silver this year. In Beijing four years ago, American viewers were shocked to see Spain practically score at will on Kobe and LeBron before a desperate flurry of three-point shots gave the U.S. the gold, 119-107.  I expect them to be very tough today with the NBA stars Pau and Marc Gasol leading the way. And I might give then a solid shot at an upset if Ricky Rubio wasn’t out with a torn ACL.

They’re not going to win today, but they’re also not going to get rolled over, like the French women were by the U.S. women. I think what you see today will be remembered as the last hurrah of the American men’s world domination of basketball.