Why I outed a Christian star

I've been called a bully for exposing gay evangelical Jonathan Merritt. Even I secretly wonder: Was I right? 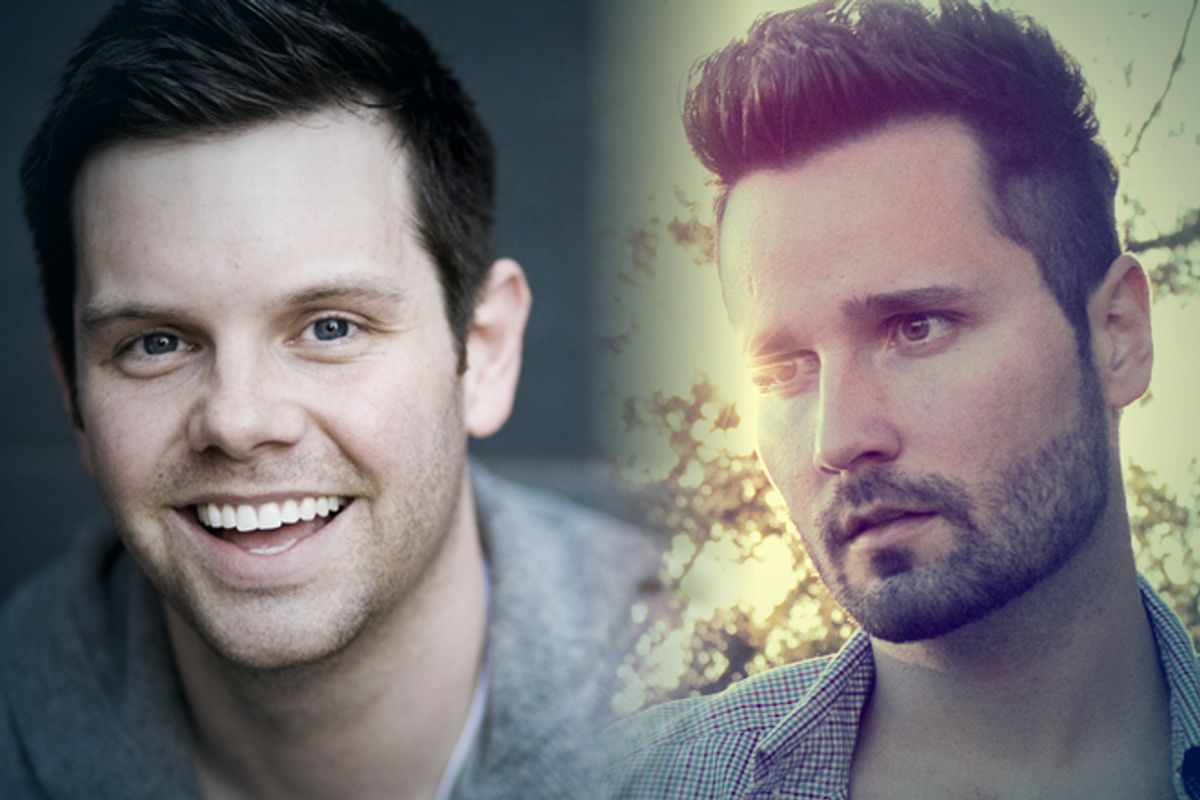 Ever since I outed an up-and-coming evangelical leader named Jonathan Merritt on my blog on July 23, one sentence has been running through my mind: I might have destroyed his life.

It’s not all the angry emails that made me doubt myself – although some have been wildly disapproving. One, from a longtime supporter, said, “Your actions are arrogant, insensitive, and nothing more. There is nothing brave, honorable or noble about what you've done. I am parting ways from you ashamed of you and what you have become.” Others called me a self-promoter and a bully. But their criticism is not what bothers me. As RuPaul once said, “What people say about me behind my back is none of my business.”

No, what bothers me, what overwhelms me with guilt, is the concern for what I’ve done to a person I care about. But then I think of how hypocrisy must be exposed. And I think of this: The truth sets you free.

In 2009, I emailed Jonathan Merritt to simply say I found his Op-Ed in USA Today  to be interesting. He is a Christian whose writing on religious and environmental issues has been featured in two books and a variety of publications, from the Atlantic to the Washington Post. Along with frequent appearances on “The O’Reilly Factor,” “Fox & Friends” and “CNN News,” Merritt has become a star among young people of faith. Oh, and his dad is the former president of the world’s largest Protestant denomination, the Southern Baptist Convention.

Jonathan and I exchanged a few emails, and a year later, in April 2010, we exchanged phone numbers. One night, we started text messaging one another. At this point, I perceived Jonathan to be a heterosexual male. Male he was, but not heterosexual. Jonathan’s text messages became flirtatious, and I became confused.

“Are you flirting with me?” I finally asked him. He admitted he was. And from there, the text messages became very explicit. It was only a matter of days before we met in person. Jonathan was going to be in Chicago at a conference, and he insisted that I be there. Not for the conference but for him.

I knew what it was to be a Christian in the closet. From 2006-2008, I was the host of a syndicated Christian TV show averaging 200,000 viewers a week. That ended after I watched a documentary titled “For the Bible Tells Me So,” a 2007 documentary that explains how the Bible has been wrongly interpreted to condemn LGBT people and same-sex relationships. That movie was the first gay-affirming message I actually listened to and understood, and it helped me unlearn decades of bad theology and scriptural misinterpretations.

I came out in 2008, and at the time I met with Jonathan, I was beginning a national speaking tour with a famous Christian singer, Ray Boltz. Ray had come out six months after me, and we decided to travel together sharing our stories. After our first show in Alabama, I drove to Chicago to meet Jonathan in the lobby of the downtown W Hotel. He had bright blue eyes and boy-next-door good looks. I was smitten. He seemed a little paranoid, though, and it wasn’t hard to figure out why. The hotel was filled with evangelicals in town for the Q Conference, which is like the young evangelical leaders’ version of a TED conference.

Jonathan and I left the hotel and took a taxi to a bar. After a few drinks we took another taxi to another bar. The alcohol was kicking in, and Jonathan’s inhibitions were coming down. In the second taxi, he began to unzip my hoodie after he realized I didn’t have a shirt on underneath. I was shocked by how forward he was -- especially with the taxi driver in the car. After the second bar, Jonathan wanted to go to a grocery store for a bottle of wine. He'd had a lot to drink, but he didn't forget to tell the cashier “no receipt.” As the title of his first book declared, he was “Green Like God.”

We made our way to my car, parked in an open and now empty parking lot. In the back seat of my stylish Oldsmobile Intrigue, Jonathan started chugging the bottle of Riesling and passed it off to me. I’m not one to chug wine, so I sipped. We were alone in the parking lot, surrounded by the skyscrapers.

I kept declining his advances. “I don’t want you to do something that will cause you to live a dishonest life,” I said. After all, my speaking tour was titled “Living True.” But Jonathan insisted it was fine. And I wanted him just as bad.

By the end of the night my lips were raw and chapped from his unshaven face. I felt a little dirty and used, but more than anything I felt bad for him. I knew the guilt that would ensue for him. I’ve been there. It’s so freeing when you connect with another gay person before you’re “out” but when it’s over, you reenter that world of secrets and lies. You’re surrounded once more by the immense social pressure to look and act a certain way within your faith community. Being gay makes you feel so alone. It makes you feel like you don’t belong, like you’ll never escape the torment and spiritual violence imposed on you by bad and broken theology.

I dropped Jonathan off a block away from his hotel at 4 in the morning. He gave me a kiss goodbye and got out of the car. As I drove the three hours back home, watching the sun rise in the east, I ran the night around in my mind. Will I get to see him again? Would he ever come out for me? What if I met his family – what would they make of me? I wasn’t head over heels for him, but I was crushed out, and I couldn’t help imagining a future together, even if part of me knew it was impossible. The sexting and Skype sessions continued for a few more months. Turns out, he did want to see me again. We made plans for another meeting in October 2010 in Atlanta.

But that meeting never took place. My speaking engagement was canceled, and we stopped communicating other than sending the casual “Happy Holiday” text message.

Outing Jonathan was not an easy decision. I mulled it over for more than a year and discussed it with friends. Those conversations always ended in, “Yeah, it’s probably not a good idea.” So, what changed my mind?

I was tired of the lies. I was tired of hearing Jonathan say that being gay is not “God’s best.” Meanwhile he enjoys the company of men. Jonathan’s approach to LGBT people and issues may be less extreme than that of the late Jerry Falwell, but in the end the results and message are the same: Your sexual orientation is a sin and you need to change with God’s help. It’s all lies -- and the conversation not only needs to change but the leaders as well.

I’m tired of my humanity as a gay man being invalidated by hypocritical leaders like Jonathan, who then expect my support in return.

But I do feel conflict. I do feel a sense of guilt. And that’s because I do have one regret, which is not discussing it with Jonathan first. That was wrong of me. If I had to do this all over again, I would have contacted him first and then decided how to handle the situation from there based on his reaction. (Merritt has admitted in an interview that "we had physical contact that went beyond the bounds of friendship.")

Outing a person is complex. There is no blanket formula for how and when and why to do it. I don’t think it’s right in every situation. If someone is in the closet and they’re not making an effort to demonize LGBT people, then I say, leave them alone. But if someone is using a public platform to discuss these issues, and doing that while hiding behind a false identity that ultimately destroys the foundation of the arguments they’re making, then, yes, a full disclosure of that person’s false identity is in order. Go to that person and let them know your intentions. If they refuse to come forward with the truth, then publicly call out their hypocrisy.

I am not asking people to “declare a side in this culture war” as the New York Times suggested in its interview with me. I am asking for our leaders to be honest and transparent. I know we are human. I know we all make mistakes, and there will always be hypocrites. But what is done in the dark can be brought into the light. So lead with integrity. Those are the kinds of leaders we need.

I may continue to be haunted by what I’ve done, but in my heart, I know the truth. Do I think I destroyed Jonathan’s life? I do not. I gave him the opportunity to live life at his best.

Azariah Southworth is a college sophomore at Indiana-Purdue Univ. of Fort Wayne majoring in Media & Public Communication. Once the host of a widely watched Christian TV show, he now dreams of being a cast member on “1 Girl and 5 Gays.”