Those amazing photos from Mars? They'd have never happened without government -- and Republicans know it 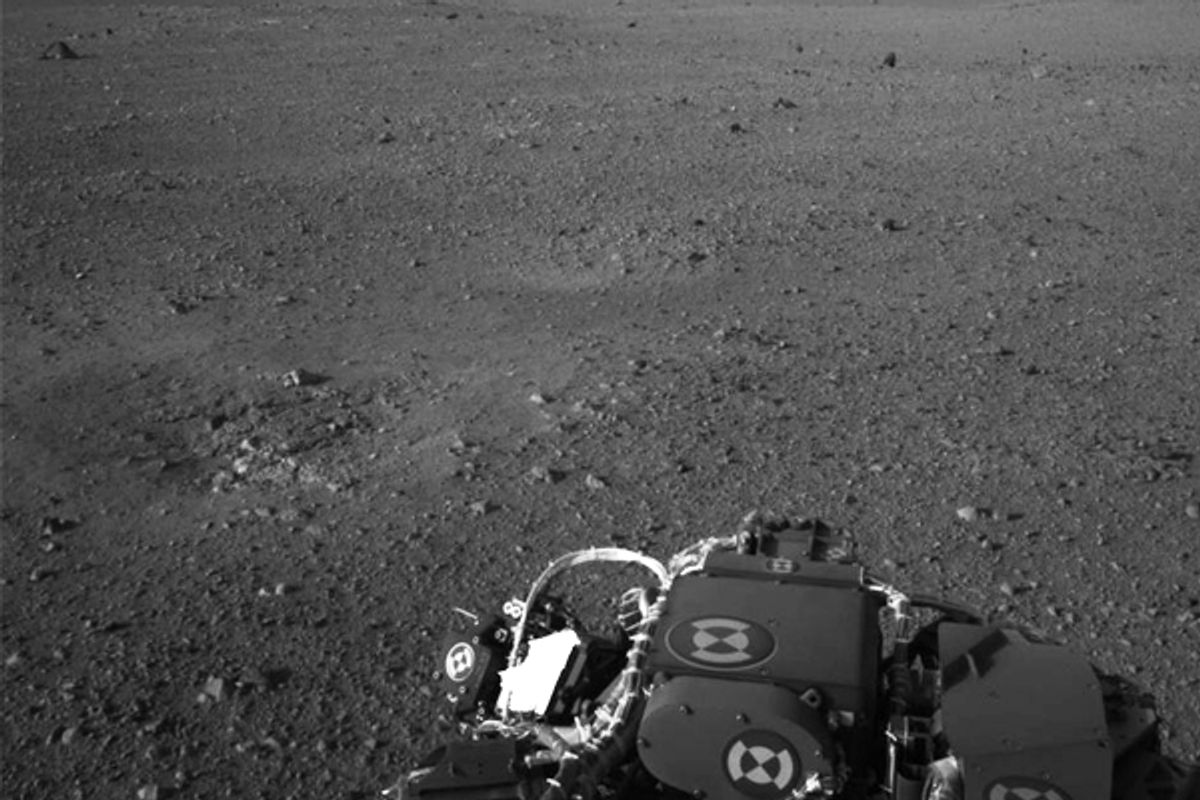 As the stunning photos of Mars flood back to Earth, NASA's Curiosity mission is so far a rare national accomplishment that isn't being sullied by partisan politics. Indeed, upon touchdown on the Red Planet, President Obama called it an “unprecedented feat of technology," adding that "on the planet Mars, the United States of America made history.” And, incredibly, no major Republican voices made a contrarian peep. For a moment, the parties seemed to agree that efforts to explore our solar system -- efforts that ultimately seek answers to the biggest questions of all -- are worth the investment.

But as depoliticized as that moment seems, it is as political as they come. For though it went largely unmentioned by politicians and the press corps, the biggest non-scientific news from the Mars landing is the fact that both parties were implicitly acknowledging that the oh-so-demonized government can accomplish things. And not just mundane things, but some of the most complicated feats anyone can dream up.

If you somehow believe landing a rover with an accuracy of 1.5 miles on a planet 150 million miles away is simple and no big deal, just watch this video entitled "7 Minutes of Terror." On top of simply reaching Mars intact, which is an amazing feat unto itself, the act of landing a state-of-the-art science lab on the planet's surface is mind-bogglingly difficult, requiring an intricate series of ever-more-challenging processes to occur in sequence, and to occur without error.

Thus, in the context of a political era that portrays the public sector as categorically unable to accomplish the most basic tasks, the "7 Minutes of Terror" video should be seen as powerful televisual evidence that today's pervasive anti-government propaganda is wholly misguided.

Now, it's certainly true that the private sector contributed to the Mars mission, including huge corporations like Lockheed Martin and General Dynamics, myriad small businesses contracted for specialty parts and private universities like the California Institute of Technology. But not even the most fringe Ayn Rand acolytes in Congress have dared assert that Curiosity was anything other than a government-run, government-managed mission. That's because they understand how NASA projects like Curiosity work. In orchestral terms, some of the musicians may be from the private sector, but the conductor, composer and funder of the whole symphony is the public sector.

As evidenced by the photos returning from Mars, NASA's eight-year symphony of engineering has been a huge scientific achievement. Likewise, the economics of the mission look just as successful, providing additional proof that government can not only succeed in complex endeavors but also that government spending can be a very efficient way to create jobs.

Yes, according to CNN Money, quoting NASA officials, the $2.5 billion project "is currently supporting about 700 people, but has supported 7,000 jobs at various times over the last eight years ... generat(ing) jobs not just at NASA but at companies ranging from Lockheed Martin to a bicycle manufacturer in Chattanooga, Tenn." Predictably, the fact-averse ideologues at the National Review complain that, "Using the 7,000 jobs created as our figure, that’s roughly $357,000 per job," somehow ignoring that, using that same math, $357,000 per job over eight years is less than $45,000 a year -- a bargain-basement salary for the high-tech scientists employed in interplanetary aerospace projects.

Of course, after President Obama's statements this week about the GM bailout, the 2012 campaign is now revolving around a manufactured question of when, if ever, the government should intervene in the economy. Here, too, Curiosity's lessons about the success of public sector investment offers some answers that counter the conventional anti-government wisdom. As Peter Diamandis, the founder and chairman of the X Prize Foundation, eloquently articulates, government is uniquely equipped to address certain tasks of overarching import:

Many considered this mission way too risky; its landing configuration was crazy in its complexity. That’s to be expected since the day before something is truly a breakthrough, it’s a crazy idea. What the success of Curiosity highlights is the importance of our being bold and audacious. It takes big risks to drive breakthroughs. Financial risks, technical risks, and -- when it comes to funding billion dollar programs -- political risks ... Ultimately taking such risks is the province of government.

The role of government is not accomplishing “sure things,” it’s in taking risks that the private sector simply can’t. If government missions aren’t failing on occasion, it probably means that they’re not pushing the envelope hard enough ...

Don’t get me wrong: It’s definitely worth mentioning the efforts of numerous private companies backed by risking taking investors. That said, none of these efforts would exist today had it not been for the past 50 years of NASA efforts.

Diamandis' point about different kinds of risk is critical. There are certain risks that we as a society should take -- to name just a few, the risk of exploring our universe, the risk of basic scientific research, the risk of insuring people with a pre-existing conditions and the risk of prospectively building infrastructure for an entire community. Though these do not guarantee a financial return, they all clearly have merit. But such risks, and others like them, will be avoided if they are guided solely by the private profit motive and shareholder returns. That's where the public sector can play a hugely positive role.

Sure, powerful special interests have used that very argument to get the government to serve their narrow and destructive ends. But those insidious forces don't have to always succeed, nor are they proof the government cannot do anything well. On the contrary, under the right conditions, we should have confidence that government has the capacity to address serious challenges. After all, if today it can successfully realize a sci-fi-esque goal as fantastical, daunting and complicated as the Mars Curiosity mission, it surely can accomplish objectives on this planet that involve fairly straightforward solutions.