Olympics hoops: The world catches up to the U.S.

The Americans hold on for gold, but this was no Dream Team. And look out for Spain in 2016 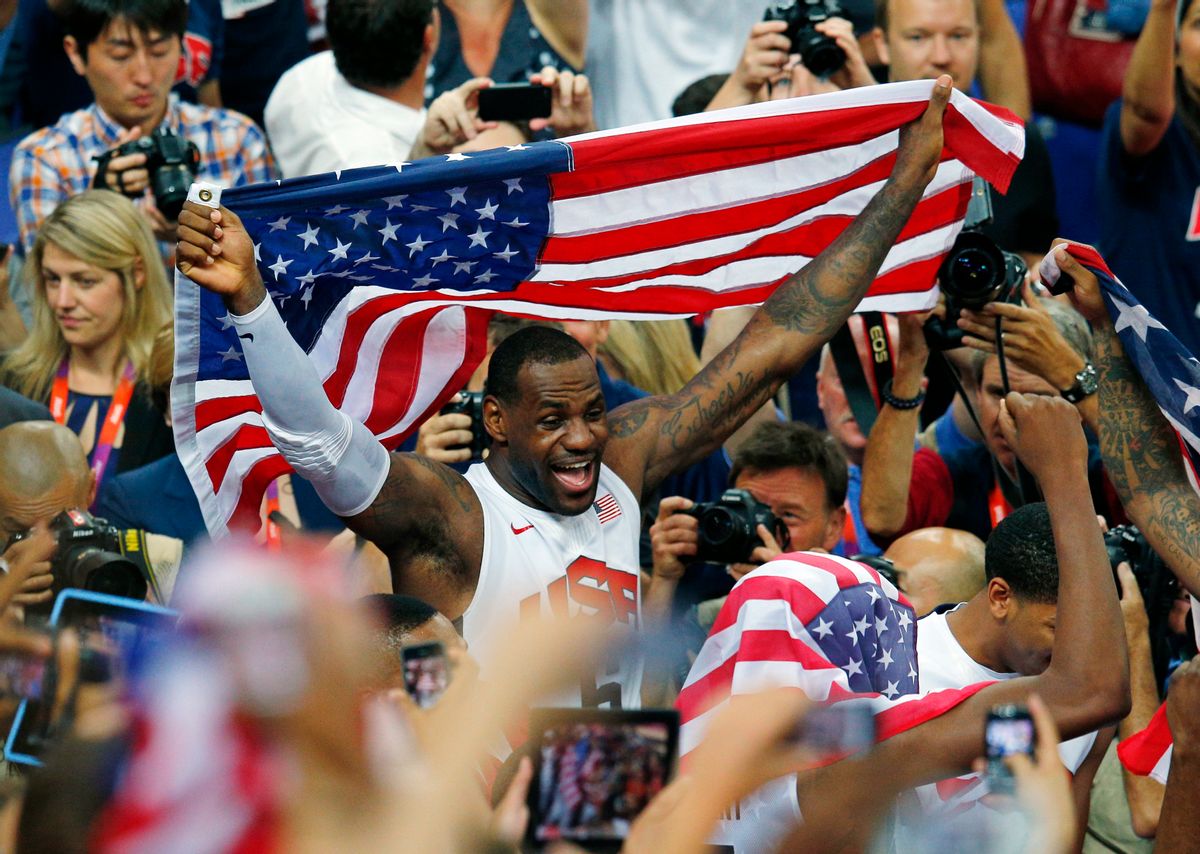 LeBron James of the U.S. celebrates with the flag after a victory against Spain in the men's gold medal basketball game (Reuters/Brian Snyder)
--

If you had done a Rip Van Winkle and gone to sleep some time before the 1992 Barcelona Olympics, you would have been startled to wake up in 2012 and find that boxing had been reduced to a minor Olympic sport and that basketball was one of the glamour events.

That professional basketball players would be allowed into Olympic competition was probably inevitable after the 1972 games, which was the first time the U.S. team had not won the gold medal in roundball since it became an Olympic sport in 1936. A Russian team who were amateurs in name only upset a team of American college boys. Americans were shocked when Frank Gifford, who was doing the commentary, bellowed “Aleksandr Belov …”  as the massive Russian center rammed home the wining shot as time expired. Coaches and players across the country grumbled: “If the Russian can have what amounts to a professional team, why can’t we use our pros?” 1988 settled it: American college boys couldn’t even bring home the silver, just bronze.

In the 1992 games in Barcelona, the Dream Team restored America’s supremacy in a resounding way. But five Olympics later, it’s beginning to look as if the world has caught up again – or at least the Spanish.

Yesterday, Spain was just one first-rate player – that might have been Ricky Rubio of the Minnesota Timberwolves, who is recovering from a torn ACL and was unable to play – away from a spectacular upset. The Gasol brothers tossed in 41 points for Spain (and they would have had more if Marc hadn’t gotten into foul trouble early in the second half).

Team USA looked headed for a blowout after leading by eight at the end of the first quarter, but for once – actually for twice, as the Spaniards did almost the same thing in Beijing – a foreign team didn’t crumble under the weight of U.S. pressure. The Spanish pulled themselves back together, exploited defensive weaknesses in the American team that were evident from the beginning of Olympic play and worked themselves into a tie with a little less than eight minutes left to play. And they did it without the barrage of three-point shots that underdog teams usually resort to against Team USA. In fact, at one point in the third quarter, Spain put up 23 points without attempting a single three-pointer.

You really did get the feeling you were watching the end of an era. American professionals simply don’t have the time to practice together on defense, at least not enough to keep up with other countries’ national teams bolstered by a couple of native NBA stars.

Still, this Olympic gold medal in basketball may have an unexpected consequence for LeBron James, one that the combination of an NBA championship ring and an MVP award could not do. Namely, turn him into a hero. We’d better start being nice to him. The U.S. team will need him in 2012.

Boxing has fallen so far from its former position of glamour in the Olympic games that I doubt it can ever rise again. For almost four decades, America’s greatest sporting heroes were Olympic gold medal–winning boxers: Floyd Patterson (Helsinki 1952), Cassius Clay (later Muhammad Ali, Rome 1960), Joe Frazier  (Tokyo 1964), George Foreman (Mexico City 1968) and Sugar Ray Leonard (Montreal 1976). They became not only household names in this country, they were the best known American athletes around the world.

This year not a single American male fighter won a medal. This was the first Olympics for women’s boxing, and two American women came away with medals – Claressa Shields, a middleweight who took gold, and Marlen Esparza, a flyweight who won a bronze after getting shafted in a horrendous decision against Ren Caccan of China.

One can’t really call this a shock, considering how bad Olympic boxing officiating is, but it was a nasty surprise considering that Esparza was not only the most publicized American boxer this year of either sex, but also the subject of a fine profile by Nathaniel Rich in the July issue of Vogue. If the fight had been held in the U.S., Esparza would have won by an easy decision or a knockout. But by the crazy rules of Olympic boxing, where jabs are awarded as much credit in scoring as solid hooks and crosses – a rule which encourages boxers to throw swarms of light pitty-pat punches – she lost by a significant margin. Marlen says she is retiring from boxing; I hope she means just from amateur boxing. Because she could be a champion as a professional.

I don’t know what to blame for America’s relative lack of success in this year's Olympics boxing. Maybe it’s that boxing in this country no longer has the pull on top young athletes, or maybe the best boxing trainers in this country are so disgusted with the flagrant dishonesty of world amateur boxing referees and judges that they don’t want their best prospects to compete in the Olympics. If I had to choose, I’d pick the latter.

In a foul as bad as any pulled off in the ring, the International Boxing Association asked NBC to remove their commentators, Bob Papa and Teddy Atlas, because their on-air comments were “very disturbing to Olympic boxing officials” -- at any rate, that’s what the IBA’s spokesman Sebastian Gillot said. The comments of Papa and Atlas weren’t disturbing, they were downright denigrating -- and they had every right to be. They did their job well, pointing out the ineptitude and dishonesty of the IBA in bout after bout.

Good for them. NBC should have stood by their commentators and refused to broadcast the fights after Papa and Atlas were removed from ringside. (They did commentary for the last 10 bouts from a studio in New York.) Shame on NBC, which should now consider dumping boxing altogether from future Olympics broadcasts.

Forty-four years ago in Mexico City, Tommie Smith won the gold for the 200m race while his friend and teammate John Carlos took the bronze. After they received their medal on the podium, they raised their black-gloved fists – Smith his right, Carlos his left -- in the most famous gesture of protest the Olympics has ever seen.

Both men were members of the Olympic Project for Human Rights, which was organized by the sociologist Harry Edwards and others to draw attention to racism in American sports and society. One of their priorities was pressuring the International Olympic Committee to ban South Africa for its apartheid policies, which the IOC subsequently did.

There was talk of a boycott of the 1968 Olympics by African-American athletes; it never came off, though some of the most publicized stars, such as the All-American basketball player Lew Alcindor (later known as Kareem Abdul-Jabbar), staged their own protest by refusing to try out for the team.

Four years ago, Smith told me that his purpose was “to represent the flag with pride, but to do it with a black accent.” He raised his fist, he said, “in military style” – he was in ROTC at the time. “My head was down,” he said, “because I was praying. There was no hate, no hostility shown or intended.”

That’s not the way IOC head Avery Brundage chose to take it. A tyrannical, small-minded bigot who, in 1936, allowed German athletes in Munich to make the Nazi salute when he awarded them medals, Brundage ordered Douglas Roby, the American athletic committee’s president, to expel Smith and Carlos from the Olympic Village.

Brundage died in 1975. Since his death, neither Smith nor Carlos has had as much as a feeler from the IOC as a gesture of reconciliation. Smith told me, “I think their attitude is, ‘Why bring it up? Why rock the boat now?’”

How about because the ideals that Smith and Carlos believed in and fought for have now been adopted wholeheartedly by the American and International Olympic Committees. Every four years another Olympics goes by, and the injustice done to Tommie Smith and John Carlos gets monstrously larger. And no one connected with American athletics, the Olympics or the TV networks that broadcast the Olympics ever raises the issue. Now is the right time to talk about this.