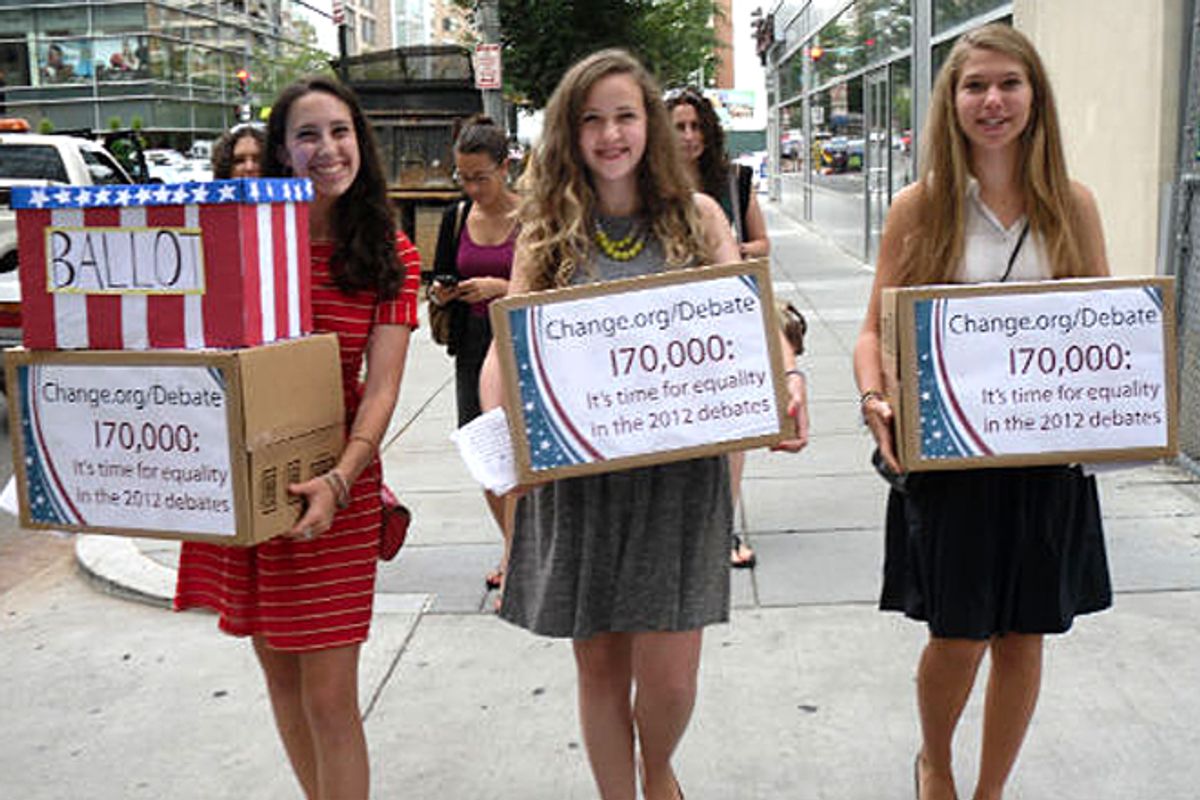 Candy Crowley's selection today as the first female moderator of a presidential debate in 20 years is highly symbolic. It's a sign of how systemic discrimination can happen -- passively and likely without outright malice -- and what low-cost, savvy activism can do to interrupt it.

The Commission on Presidential Debates named CNN's Crowley to moderate the town hall–style presidential debate, the same slot the last woman to moderate filled. (That was Carole Simpson of ABC, back in 1992.) ABC's Martha Raddatz will moderate the vice presidential debate. (Gwen Ifill has moderated that one twice.) There's no way to know for sure, but there's good reason to think that three smart, telegenic 16-year-olds from the New Jersey suburbs had a lot to do with it.

Emma Axelrod, Sammi Siegel and Elena Tsemberis heard that it had been 20 years since a woman had moderated a presidential debate, and they took to social media and Change.org. Their polite storming of the debate commission, whose officials evaded their requests for a meeting, was old-fashioned activism combined with a well-placed press conference. But their message was rapidly amplified by a combined total of 180,000 signatures in an online petition and wide-ranging support on social media.

Crucially, it was an intergenerational effort. "This is an example of how young women are going to change the world and change feminist movements," said Shelby Knox, the senior campaigner for Change.org who helped shepherd the girls' efforts. Who wanted to be the one to tell some civic-minded teenagers that they should stop whining? The drumbeat grew louder when what women we do have in political office threw support their way: Kirsten Gillibrand, for whom female representation has become a pet project; Christine Quinn, seeking to become New York's first mayor; Rep. Carolyn Maloney; and former Gov. Jennifer Granholm. Today, Nancy Pelosi congratulated Candy Crowley in a tweet.

This is a strange election when it comes to gender. After the paradigm-shattering represented by Hillary Clinton and, for better or worse, Sarah Palin during the last cycle, the only woman running for president in 2012, Michele Bachmann, flamed out early (and for good reason). Mitt Romney passed over the female governors whose names were floated for vice president, and Republicans aren't showing any signs of backing down from both a state-level and federal obsession with limiting reproductive rights. Meanwhile, Barack Obama might as well be guest blogging at Feministing these days.

The question is, why did it take this long? What possible excuse could the debate commission have had over the past 20 years for being unable to find a qualified broadcast journalist who also happened to be a woman?

It's not clear that anyone has ever asked them. "I don’t know of any previous concerted or continuous campaigns," said Knox. "I’m sure the feminist community has commented on it, but as far as I know these girls are the first ones to put together a strong national campaign." It's easy to see how the debate commission, under the assumption that they'd already done the lady thing before, had continued to overwhelmingly opt for moderators who fit the archetype of authority -- an older, white male.

"I do know that they sparked a national conversation that we weren’t having before they started the campaign," said Knox. "I think this may have caused the commission to look at journalists whom they previously overlooked because of their gender."

That national conversation now includes some pretty enthusiastic teenagers. Said Knox, "The squealing when I told one of them was earsplitting."