What would Jerry Seinfeld do?

A "Seinfeld" reunion is unlikely. But one of the show's writers explains where the characters would be in 2012 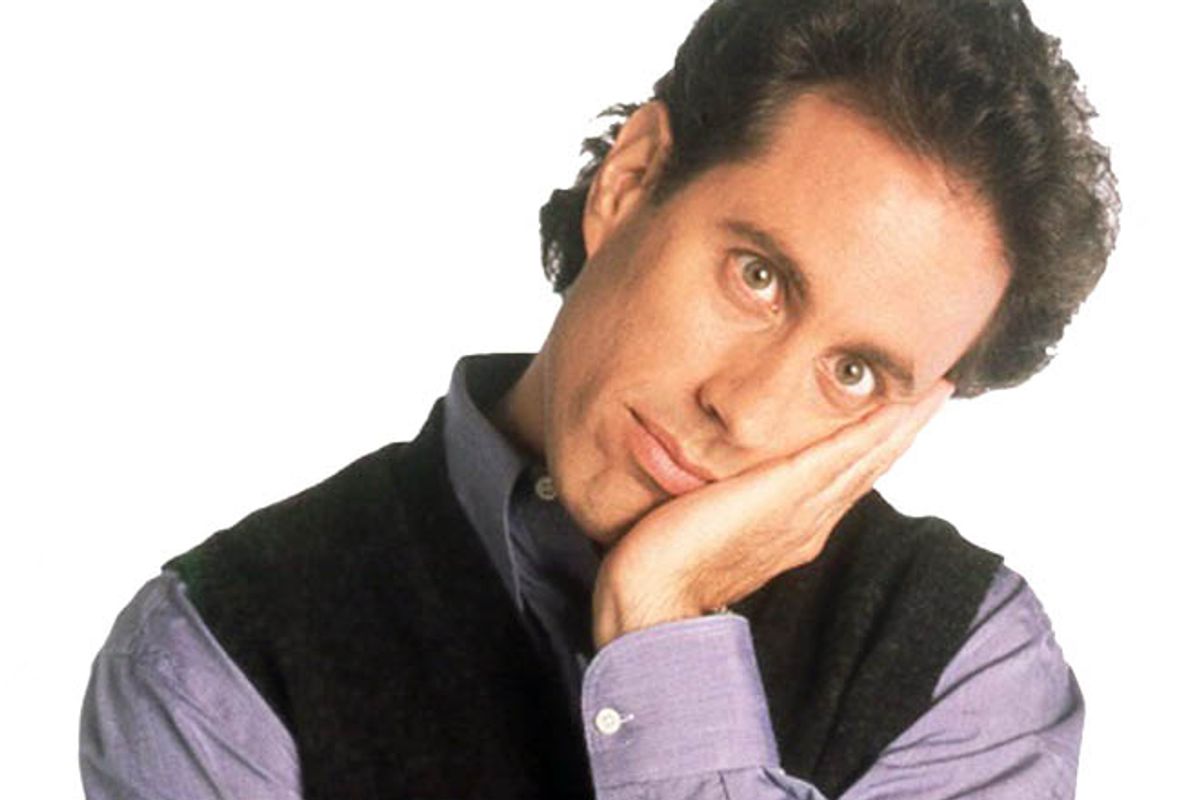 With the networks trumpeting fall shows that can’t fail -- until most of them do! -- I’m struck once again by how the new comedies, upon first glance, appear to be missing something: The distinctive brand of wisdom, world-weariness and arched eyebrows that shines a light on the human condition and springs from a Jewish sensibility.

What if "Seinfeld" (a show I wrote for) were around today? On isolated occasions, it addressed Judaism head on – like when Jerry resented his dentist for spouting off Jewish jokes immediately after converting to Judaism, or when Jerry and Elaine observed their god-parent duties and attended a bris. But over and above any direct references, the show’s affinity for shining a light on the neurotic little nooks and crannies of day to day existence resonated with Jews along with much of America. With the conceit that the principals are still the same ages and residing in their same digs, what might be Seinfeldian fodder, circa 2012?

* I see George bemoaning his folks’ new obsession with Skyping. The original reason he taught them to Skype was to replace their actual visits together with virtual visits on his computer. But now, their faces are popping up on his monitor more often than spam from Nigeria. It’s like his parents have become his new screensaver! And whenever they pop on, George has to stop whatever he’s doing and talk to them, just because he was idiotic enough to spring for a $25 webcam so he wouldn’t have to drive to Queens. On the phone, they couldn’t tell when he rolled his eyes after a nag. Now they can plainly see him rolling his eyes after a nag, which they now nag him about!

* I can picture Jerry sarcastically asking what unemployed George is so busy doing that he has to stop doing it in order to “visit” with Frank and Estelle. George’s reply: “Watching a dog ride a motorcycle on YouTube.” Jerry would probably agree: "That dog is good." Speaking of unemployment, George might have this tiny epiphany: Relatively speaking, he’s cleaner than most of the country. Being among the 8.3 percent unemployed, he gets up later than the other 91.7 percent. Meaning he showered more recently than the people who work for a living. The cleanest guy is the most out-of-work guy. Jerry agrees George is the most recently clean guy he knows.

* Jerry could complain about the emails his folks are always forwarding him with jokes and pithy sayings their friends and relatives originally forwarded to them. Like “Chicken soup makes you feel better. Unless you’re a chicken.” He feels too guilty deleting his folks’ emails, so he’s got to open them up and pour through each and every one of them, in case his parents throw him a mom and pop quiz later. George hates those things, especially when the jokes have images attached. With dial-up, it takes forever. George still has dial-up? Yes. That way he can fantasize that somebody important is unable to get through to him on the landline while he’s on the computer, versus paying extra for DSL, not hearing his phone ring, and knowing for a fact that somebody important isn’t trying to get through to him on the landline while he’s on his computer.

* Elaine’s cousin keeps emailing her .jpgs of her baby. When Elaine and the gang were little, their parents took pictures two, three times a year, until puberty kicked in and ruined everything. Now it’s Eli’s third month … Eli's fourth month … Tons of pictures to download. Pretty soon it’ll be Eli’s 17th week … 18th week … Elaine feels like she’s raising the kid. She’s had it. She’s not downloading this month’s crop. She’ll tell her cousin the pictures were cute. How could the kid not still be cute, right? George suggests the generic response, “He looks like a real handful.” Talk about bad advice.  He’s a she.

* Newman, in particular, is threatened by all this email, because it’s cutting into his livelihood -- the delivery of actual mail. Jerry asks … Newman … if he'll do him a favor and immediately deliver his "Dear John" letter into the hands of the recipient so the recipient can immediately trash it. Newman says no way. That, notes Jerry, is why the post office will never be able to compete with email.

* The “Dear John” in question is Jerry’s latest girlfriend, with whom he could be losing patience over her overuse of “amazing.” She called the movie “amazing,” the pizza “amazing,” the gum “amazing,” and his religion “amazing.” Either she thinks "The Avengers," thin crust, and Cinnamint are replete with the traditions of the ages, or she thinks Jerry’s religion is overhyped, cheesy and loses its flavor after chewing on it for a while!

* Kramer could suggest Jerry start calling things that clearly aren’t amazing “amazing” to wean her off the word. “That garbage is amazing.” “That ingrown hair is amazing.” A skeptical Jerry notes that if Kramer’s suggestion worked, it would be “amazing.”

* Meanwhile, Kramer is busy developing something that everybody, including Jerry, will find amazing … an app that connects you with other people who share your interest in apps. Jerry has no interest in apps. Then Jerry will be left behind the curve, warns Kramer. He’ll be like a Cro-Magnon thumbing his nose at the wheel! So how does it work? It lists the email addresses of the other people who buy the app. That’s it? What if nobody else buys the app? Well … They’ll be like Cro-Magnons thumbing their noses at the wheel! George thinks Kramer’s better off developing an early warning app that tells you when your parents are about to Skype, so you can turn off the computer.

So networks, if you’re listening … we need a new sitcom about kvetching.

Andy Cowan is an award-winning writer, producer and performer, whose credits include "Cheers," "Seinfeld" and "3rd Rock From the Sun." He can be reached through his website, upanddownguys.com.