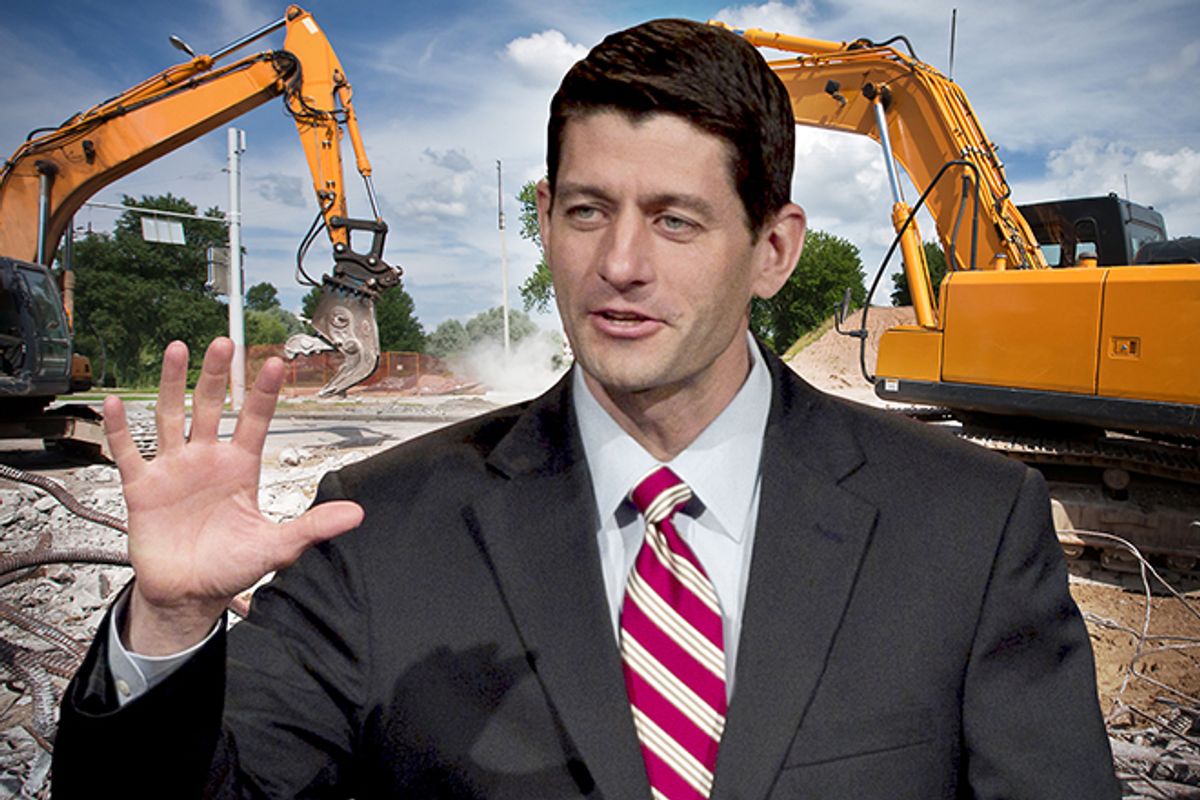 When Paul Ryan took to the stage in Mooresville, North Carolina, as Mitt Romney’s running mate, he attacked President Obama’s “you didn’t build that” remark about the role of government in supporting private innovation. But while Republicans have been clamoring to make this election a false dichotomy between the private sector and the public sector, Paul Ryan — heir to a private fortune made by building public highways — is a gaping pothole in that plan. Paul Ryan is a living, breathing GOP example of how public infrastructure and private entrepreneurship work hand-in-hand.

Paul Ryan’s great-grandfather started a construction company to build railroads and, eventually, highways. According to the Web site of Ryan Incorporated Central, the company was “founded in 1884 with a single team of mules building railroad embankments in Southern Wisconsin.” And in the 1800s, railroad construction was subsidized by the federal government. Mid-century, President Lincoln signed the Pacific Railway Act into law, providing taxpayer dollars to fund the construction of a transcontinental railway. All railroads thereafter connected to, and benefited from, that public investment.

At the turn of the century, Ryan Inc. turned to road building. A subsidiary family corporation, Ryan Incorporated Southern, states on its Web site, “The Ryan workload from 1910 until the rural interstate Highway System was completed 60 years later [and] was mostly Highway construction.” The $119 billion spent by the federal government on the Interstate Highway System was, by one account, “the largest public works program since the Pyramids."

And, according to the Ryan Inc. Web site, the company completed “some of the original work at what would become O'Hare Airport” in Chicago. Originally, O’Hare Airport was a manufacturing base for World War II transport planes. In other words, it’s likely that construction project, too, was paid for by tax dollars. A current search of Defense Department contracts suggests that “Ryan Incorporated Central” has had at least 22 defense contracts with the federal government since 1996 , including one from 1996 worth $5.6 million.

When President Obama said that we succeed in America “because of our individual initiative but also because we do things together,” he was actually speaking in more general terms — about manufacturing companies that ship their goods on our railways and highways and thus indirectly benefit from that public infrastructure. With a net worth of up to $3.2 million and ranking as the 124th richest member of Congress, Paul Ryan very directly and very significantly benefited from the federal spending he now rails against.

Or does he? What’s funny is that Mr. Anti-Spending secured millions in earmarks for his home state of Wisconsin, including, among other things, $3.3 million for highway projects. And Ryan voted to preserve $40 billion in special subsidies for big oil, an industry in which, it so happens, Ryan and his wife hold ownership stakes. Yet Ryan wants to gut financial aid for college students, food stamps for hungry families, Medicaid, Medicare and Social Security — the very things that have, historically, helped poor families climb the ladder of opportunity in America.

And this is precisely the problem with the Romney-Ryan vision for America: It takes the ladder of opportunity and public infrastructure that helped the previous generation and yanks it up for the next generation. Your grandfather went to college on the GI Bill? We’re not even going to give you measly Pell Grants! Your grandmother lived independently thanks to Social Security? We’re giving yours to Wall Street to crash with the rest of our economy! Your great-grandfather got rich building public railways and roads? We’re going to cut taxes for the rich to historic lows and raise taxes on the struggling middle class to barely cover the cost of plugging potholes!

It’s “I Got Mine, Now Screw You!” economics. This kind of hard-heartedness may appeal to the extreme fringe base of Republican voters, but it is as repulsive to mainstream voters as it is corrosive to the American dream. The Romney-Ryan budget focuses 62 percent of its cuts on programs that help the poor — in order to pay for more tax breaks for the already-rich and, incidentally, raise the deficit.

“Of course we believe in government,” Ryan said to the New Yorker’s Ryan Lizza. “We think government should do what it does really well, but that it has limits, and obviously within those limits are things like infrastructure, interstate highways, and airports." In other words, the government spending that helped Ryan’s family get ahead falls within the proper role of government. The government spending that helps other families get ahead ...? Fortunately, Ryan Inc. also builds landfills, so we’ll have somewhere to bury all that wasteful spending on the poor and middle class.