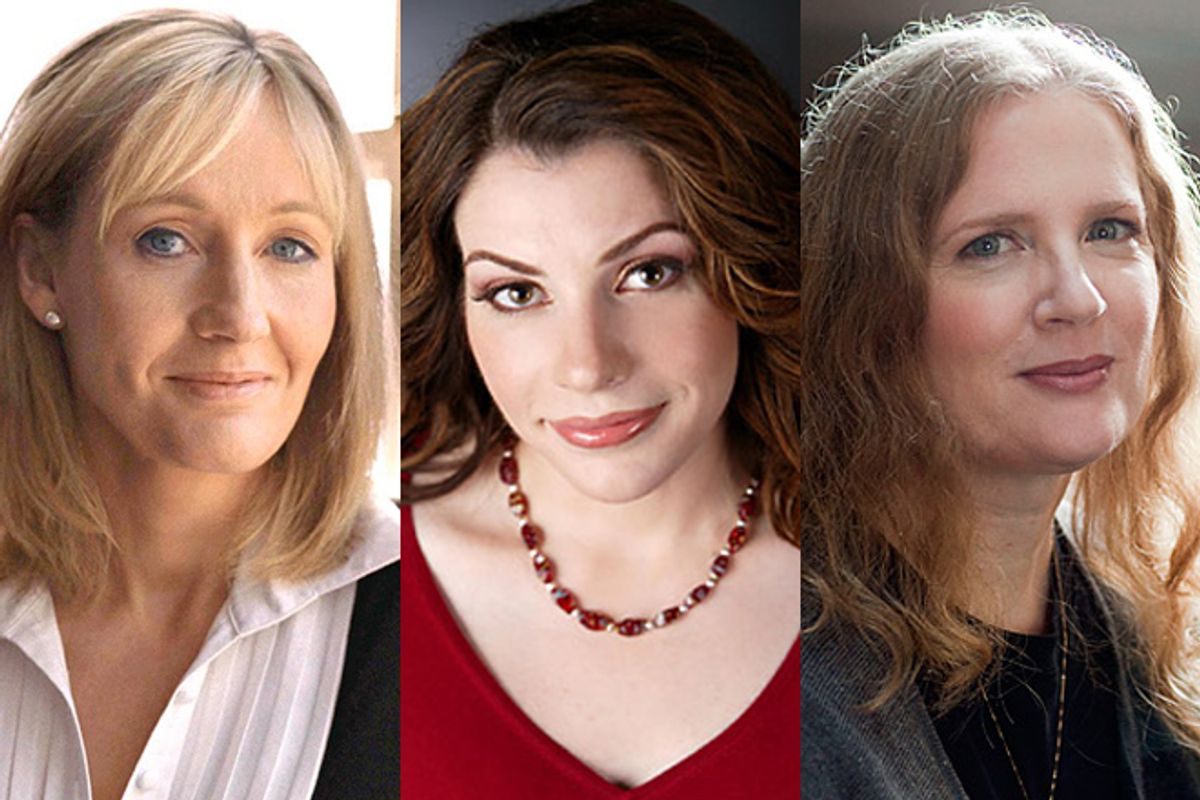 The prototypical YA (Young Adult, i.e., early teen) novel "The Catcher in the Rye" may have been written by the late, reclusive and definitely male J.D. Salinger, but nowadays, YA -- like Elvis on "Happy Days" -- is a chick thing. So says Meghan Lewit in a recent post to the Atlantic's website, and she has the numbers to prove it, sort of: A little over half of the titles in a reader poll of the 100 "best-ever teen novels" are by women. This counts as "dominance" because in almost every other poll of best-ever books (whatever the category), works by men greatly outnumber those by women.

Ask anyone in the book business if Lewit is right, and they'll probably agree; with a few exceptions, the most successful and prominent contemporary YA writers are women. Furthermore, the cultural infrastructure supporting their books -- from agents and editors to librarians, teachers and that formidable new force in the YA world, bloggers -- is predominantly female. Some observers blame this state of affairs for the drop-off in boys' reading habits as they reach their teens; it's a system ill-suited to producing books that will interest boys, they argue. But if YA has indeed become a gynocracy, few ask why.

The answer, I believe, is prestige. YA is a prestige-free zone, or at least it has been for most of the decades of its existence as a self-identified genre. Perhaps this is changing, now that we've seen certain very popular YA series bestride the bestseller lists: Harry Potter, Twilight and the Hunger Games. Yet I don't think the prestige of YA has changed all that much, not really. Unfortunately, I can't prove it.

That's the maddening problem with prestige: It can't be measured. Immaterial and unquantifiable as it may be, it still lies behind many of the ongoing debates among book lovers. The pitched battle waged by genre fans against literary fiction is largely about the allocation of prestige. So is the campaign to highlight the gender imbalances in literary journalism. Even Jonathan Franzen vs. Oprah, a face-off that's beginning to fade from the collective memory, was ultimately about prestige.

Prestige is a poorly articulated and barely understood phenomena. It's also a powerfully motivating one. Prestige is what Jennifer Weiner and Jodi Picoult were complaining about when they launched a thousand commentaries by griping about Franzen's press coverage on Twitter. It's what the diligent and tenacious VIDA (Women in the Literary Arts) is attempting to calculate when, every year, it counts up the book reviews and bylines in a dozen or so highbrow journals to determine how well women writers are represented. And it's what Nathaniel Hawthorne was bitching about when he wrote to his British publisher in 1855, "America is now wholly given over to a damned mob of scribbling women, and I should have no chance of success while the public taste is occupied with their trash."

Actually, Hawthorne was bitching about sales, to which is prestige is -- usually -- inversely proportional. A novel like Alice Sebold's "The Lovely Bones," for example, was treated as if it had a certain amount of gravitas when it was first published in 2002. It received a respectful review from Michiko Kakutani in the New York Times ("What might play as a sentimental melodrama in the hands of a lesser writer becomes in this volume a keenly observed portrait of familial love and how it endures and changes over time"). A little less than a year and millions of copies sold later, "The Lovely Bones" was the subject of a blistering takedown by Daniel Mendelsohn in the New York Review of Books, condemned for being "sentimental" and peddling "feel-good emotional redemption."

When prestige is at stake, the words in play will be "literature," "great" and "serious." Disputes can get ugly, but there's also a surprising amount of consensus. While it's impossible to demonstrate in any concrete terms that one writer enjoys more prestige than another, anyone sufficiently familiar with literary culture will concur that, say, Don DeLillo outranks, say, Richard Ford in this department. That's the case even though both men write in roughly the same genre and Ford has won the Pulitzer Prize while DeLillo has not.

Prestige is most definitely a hierarchy, but its criteria are elusive. In recent years, Cormac McCarthy's fiction has become increasingly commercial -- dipping into supposedly unserious genres like post-apocalyptic science fiction ("The Road") and crime thriller ("No Country for Old Men") -- but his prestige has only multiplied, perhaps because he conducts himself with a crusty, mediaphobic dignity. Salman Rushdie, on the other hand, has bled prestige since he transformed himself from a persecuted cultural dissident to the scene-making (now ex-) husband of a reality TV star. Participate in celebrity culture, especially if you appear to enjoy it, and your P quotient will take a big hit.

Counting reviews or prizes is as close as critics of the current prestige economy can get to quantifying who's got how much of it. Yet, at least as important is simply the way people talk about a writer. Do young writers cite him or her as an influence in reverent tones? Do college students conspicuously tote a dog-eared copy of his or her masterpiece around or conspicuously display it to impress visiting dates? Do his or her titles often appear on best-of lists? Are they held up as a gold standard in reviews and essays about other books? Does anyone kvetch when the Library of America comes out with a collection of his or her writings? Do other authors feel that their own work has been elevated simply because they have the same editor or publisher? Do book people become slightly awestruck when the author in question enters a room?

I know, a lot of this may sound silly, but it matters to many authors, who as a rule do not get into this line of work for the money. Those who do manage to make good money from their books are often dismayed to learn that every point they gain in popularity is a point lost in prestige, a treacherous bit of math performed behind the scenes by persons unknown. Some writers (justly) point out that the immaterial rewards of reputation seem to be disproportionately distributed to the old, the white and the male. It's also true that a preoccupation with deciding which books are truly "great" (or not) and with sorting authors into a pecking order of literary importance does seem particularly prevalent among men.

YA fiction has blossomed outside the literary world's prestige economy. There are prizes and other honors within the children's book community, but they're nearly invisible outside of it. While working on a story about "The Hunger Games," I was astonished to learn that otherwise well-informed people had never even heard of the series, although it had spent over a year at the top of the bestseller list and vast numbers of adolescents were obsessed with it. If you're craving glory, if you want to be hailed as a genius or the voice of a generation or a literary titan, if you want other writers to defer to you and journalists to hang on your every word, then look elsewhere. When your intended audience is kids, you have a shot at the most enthusiastic and devoted readers in the world, but you can't delude yourself that you'll ever land a Pulitzer, let alone the Nobel Prize.

The relatively low status payoff in YA fiction applies to its readers as well. Many grown men recall segueing briskly from middle-grade kids' books to adult fiction in their teens, skipping the YA section entirely. They were, they say, keen to move on to the "real" books. No surprise, then, that fewer of them are inspired to write for a genre that they never particularly wanted to read and that, like teaching and librarianship, has traditionally offered little recognition.

But YA's relegation to prestige limbo has also liberated the many authors who find themselves exasperated, bored or intimidated by adult literature's greatness sweepstakes. In prestige limbo, success and respect are not mutually exclusive. Setting out to provide your readers with pleasure, even the old-fashioned kind, is not automatically viewed as pandering. Your readers will not care if you got a MacArthur grant or what James Wood said about your book or whether it was well reviewed in the New York Times -- or, for that matter, whether it was reviewed at all.

It turns out that a lot of adults like to read fiction written under those conditions, too. The best YA provides a holiday from the self-importance and intellectual anxiety that plague and often deform the world of adult literature. Occasionally, YA has transformed its humble practitioners into very wealthy women (and men), and without a doubt it can profoundly shape the minds and selves of its young readers. That's enough for some people, even without the Pulitzer Prize.

Why Do Female Authors Dominate Young-Adult Fiction? by Meghan Lewit for the Atlantic