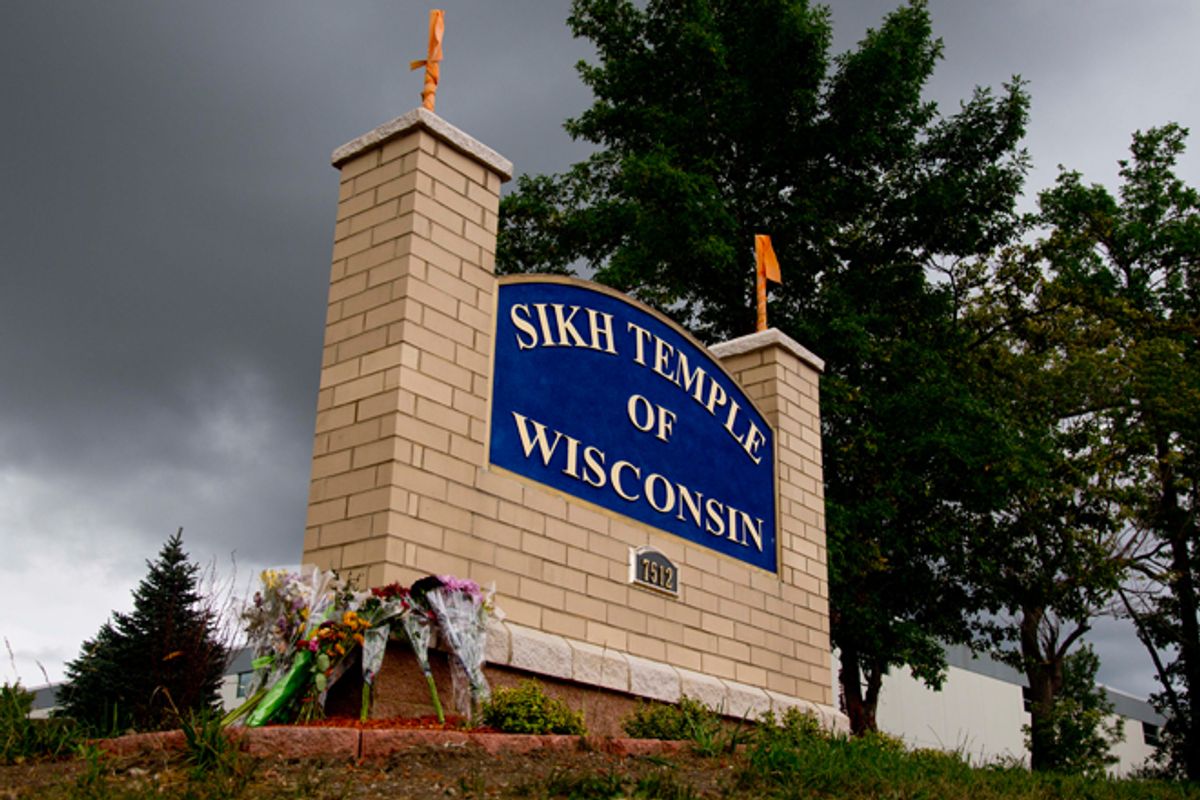 Flowers lie on the sign to the Sikh Temple of Wisconsin in Oak Creek. (AP/Jeffrey Phelps)
--

Daryl Johnson, architect of the infamous 2009 Department of Homeland Security report on right-wing extremism, made headlines last year, when he accused Homeland Security of ignoring the growing threat of right-wing violence due to political pressure. Johnson said DHS employed just one analyst to monitor all non-Islamic extremism, down from eight prior to the report’s release. In stark contrast, the department has at least two dozen personnel assigned to analyzing the threat of homegrown Islamic extremism.

Fast-forward to 2012, and the danger posed by right-wing extremists still exists, as demonstrated by the recent Sikh Temple massacre, in Wisconsin. Yet DHS continues to turn a blind eye, says Johnson.

“Right around the time I went public last year, they hired a brand-new person with no experience and no law enforcement connections,” Johnson told Salon. But shortly thereafter the new hire was transferred to a different unit, again leaving just one analyst on the beat. A year later, Johnson says, “absolutely nothing has changed.”

While DHS would not return Salon’s requests for comment, another former DHS analyst, who asked not to be named for fear of reprisal from the law enforcement agency he currently works for, told Salon that there have been, at most, two DHS analyst on the non-Islamic extremism beat since he left the agency in 2010. During his time at DHS, he recalls a “3-to-1 ratio” of analysts assessing Islamic extremism versus those covering non-Islamic threats.

He referred to his current employer as a “law enforcement customer of DHS,” meaning that they rely on DHS threat assessments, like the right-wing extremism report released by Johnson’s former task unit. According to the former analyst, “very few products have been released in the past several years [on right-wing extremism]. A couple, but not much at all.”

Johnson isn’t suggesting that we ignore the threat of Islamic extremism. Instead he argues for a more “balanced approach.” He believes that DHS should devote “at a minimum” the same amount of resources that it had in 2009 to analyzing right-wing extremism, before his unit was sacked.

Back then eight analysts were on the non-Islamic domestic extremism beat, says Johnson -- “myself, five others, plus two others helping.” Still, he cautions, “I was always shorthanded with too much work to do, so 12 would be ideal.” But Johnson doesn’t see that happening unless Congress gets involved. “The House Homeland Security Subcommittee has the ability to influence what office of intelligence is doing,” but given the current political climate, that’s unlikely.

Johnson’s 2009 report, titled “Rightwing Extremism: Current Economic and Political Climate Fueling Resurgence in Radicalization and Recruitment,” warned that the election of America’s first black president coupled with an ailing economy would cause a resurgence in right-wing extremism, which Johnson spent 15 years studying.

The report concluded, “white supremacist lone wolves pose the most significant domestic terrorist threat because of their low profile and autonomy — separate from any formalized group — which hampers warning efforts.” Johnson also highlighted the potential for extremists to recruit military veterans, a prescient warning in the wake of the Sikh Temple massacre, where the shooter, neo-Nazi skinhead Wade Michael Page, was a military veteran.

Though the report was intended exclusively for law enforcement, it was immediately leaked to the public, igniting a fierce backlash from conservative pundits, talk radio shock jocks and Republicans on Capitol Hill. America’s right-wing political machine denounced the report as a conspiracy by President Obama to paint everyday conservatives and Tea Partyers as violent extremists.

Newly sworn in DHS Secretary Janet Napolitano caved under the pressure and eventually apologized for the report. Johnson’s unit was slowly dismantled over the next year, leaving behind just a single analyst to assess all non-Islamic extremist threats.

Johnson has since written a book on the subject, “Right Wing Resurgence: How a Domestic Terror Threat Is Being Ignored,” which will be released in September.

The report’s accurate predictions have left many wondering whether the Sikh Temple shooting could have been prevented if the DHS had been paying more attention to the threat of right-wing extremism. “I don’t think we could have interceded because DHS doesn’t do that. That’s the job of the FBI and other law enforcement,” says Johnson, but that doesn’t mean the shooting wasn’t avoidable. “What we would have done is put together a threat assessment sending out a warning to the Muslim and Sikh communities that offers protective measures to take, like being more vigilant. Whether that would have helped them prepare for violent attack we can’t know.”

The New Yorker’s Steve Coll recently cited a statistical analysis of 302 domestic terrorism incidents since 9/11, undertaken by researchers at Syracuse University’s Maxwell School of Public Policy and the New America Foundation, which found:

Of the three hundred domestic-terrorism cases studied, about a quarter arose from anti-government extremists, white supremacists or terrorists animated by bias against another religion. And all of the most frightening cases—involving chemical, biological and radiological materials—arose from right-wing extremists or anarchists. None arose from Islamist militancy.

This should come as no surprise given that the Southern Poverty Law Center reports a record 1,018 known hate groups in the United States, a 69 percent increase since 2000. Among them are “neo-Nazis, Klansmen, white nationalists, neo-Confederates, racist skinheads, black separatists, border vigilantes,” with the largest growth seen in the Patriot movement. “The number of Patriot groups, including armed militias, grew by 755 percent in the first three years of the Obama administration – from 149 at the end of 2008 to 1,274 in 2011.”

According to the National Consortium for the Study of Terrorism and Responses to Terrorism, or START, “Between 1990 and 2010 there were 145 ideologically motivated homicide incidents committed by far-right extremists in the United States.” One hundred of those attacks, including last week’s Sikh Temple massacre, are listed in detail in the SPLC’s report “Terror From the Right”

Mosque Attacks on the Rise

Ironically, it is Muslims who have been most victimized by terrorism as of late. Johnson, who persistently monitors right-wing extremism for DT Analytics, the consulting company he founded after leaving DHS, tells Salon that he has noticed an “uptick in the number of mosque attacks within the last year,” which the DHS has done nothing to prevent.

Attacks targeting Muslims or people perceived to be Muslim have risen dramatically in recent years, increasing from 107 in 2009 to 160 in 2010, a 50 percent spike according to FBI hate crime statistics. The actual numbers are likely higher given that 56 percent of hate crimes go unreported, according to data compiled by the Bureau of Justice Statistics. Meanwhile, the SPLC reports that anti-Muslim hate groups tripled from 10 in 2010 to 30 in 2011.

This weekend alone saw a string of attacks in the suburbs of Chicago. On Friday night, a Muslim Education Center in a northern Chicago suburb was fired on with an air rifle  as 500 people, including children, packed the building to attend services for the holy month of Ramadan. No one was injured, though an on-duty security guard barely escaped a shot to the head. Two days later, a homemade explosive device was thrown at a private Islamic school, located about 20 miles outside Chicago, during Ramadan prayer services.

Prior to these attacks, the Council on American-Islamic Relations had issued a safety advisory to mosques across America following mosque attacks in Missouri and Rhode Island less than a week after the Wisconsin Sikh Temple shooting.

Chicago’s Muslim community was concerned about remarks made by U.S. Rep. Joe Walsh, R-Ill., at a town hall meeting last week. When asked about the threat of radical Islam, Walsh was caught on tape warning his constituents that Muslim extremists around the country and even in Chicago’s suburbs are “trying to kill Americans every week.” He went on to call radical Islam “a threat that is much more at home now than it was after 9/11,” adding that another 9/11 “is not a matter of if. It’s a matter of when.”

Ahmed Rehab, executive director for the Chicago chapter of the Council on American-Islamic Relations, said in a statement:

Such indiscriminate vilification is not unrelated to the rise in hate crimes and acts of vandalism we are seeing today. When elected officials, trusted by many, indicate that the enemy could be any Muslim living in your neighborhood, it gives rise to xenophobic vigilantism where fearful citizens target other Americans for simply looking different.

Nevertheless, Walsh defended his comments, saying that “there is a radical minority that wants to destroy America,” even bragging about his membership on the Committee on Homeland Security, which has held hearings on radicalization and extremism in the American-Muslim community.

Johnson says that ideologically driven violence is typical amid an atmosphere of consistent vilification of a particular group by politicians and media personalities. He points to the firebombing of Planned Parenthood clinics by antiabortion activists, following the barrage of Republican efforts to defund the organization, as an example.

“Dozens and dozens of people get killed or shot based upon these [right-wing] ideologies that no one ever notices because they’re not portrayed in that light,” says the unnamed former DHS analyst. In order to prevent this ideologically driven violence, he says, the underlying cause needs to be understood, an impossible task when the “people doing domestic intelligence can’t look at anything politically sensitive because it’s politically sensitive.”